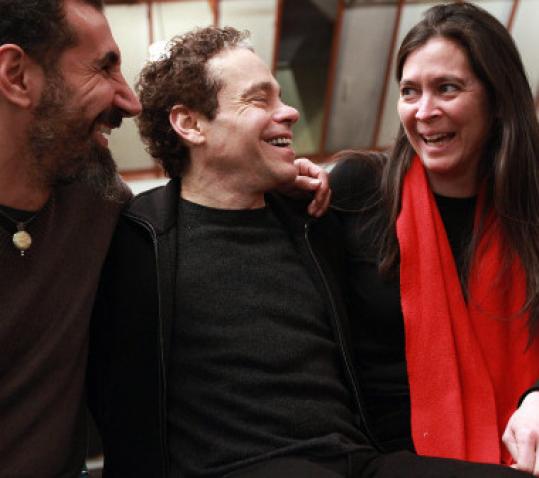 CAMBRIDGE — His bathrobe was on fire when someone on the street below screamed at him to jump.

Steven Sater had awakened to a blaze racing through his third-floor apartment. His bed had already gone up in flames. Now he stood on his large brick balcony, waiting for help that was slow to arrive. The glass from the French doors burst out at him, and the voice cried, “Jump!’’

“And I threw off the robe, and my face was on fire. I put out the fire on my face, and I climbed up and I jumped,’’ said Sater, then a college sophomore in St. Louis, now a Tony Award-winning playwright and lyricist living in Los Angeles. “I went hurling through space and I landed on the concrete, and I shattered and fractured a total of 14 vertebrae, and I broke my arms and wrists.’’

Sater, who with composer Duncan Sheik wrote the 2006 Broadway hit “Spring Awakening,’’ recounted his long-ago trauma the other afternoon, tucked into a corner of a cafe near Harvard Square. Feeling flu-ish, he was determined nonetheless to talk up his latest rock musical, “Prometheus Bound,’’ which might never have come to be if not for that conflagration.

That’s because Sater taught himself ancient Greek during the months-long hospitalization that followed the fire. Lying nearly immobile, rotated in his bed every two hours, he learned to turn textbook pages with his teeth while he was on his stomach.

Years later, he would translate Aeschylus’s tragedy about the god Prometheus, and from that script has come his adaptation, with music by Serj Tankian, frontman of the band System of a Down. Directed by American Repertory Theater artistic director Diane Paulus, the ART’s world premiere production of “Prometheus Bound’’ begins previews Friday at Oberon. Gavin Creel, who starred in Paulus’s acclaimed Broadway revival of “Hair,’’ plays the title character. Lea DeLaria plays one of Zeus’s henchmen.

That Prometheus is the god who, according to myth, stole fire and gave it to human beings is something Sater evidently doesn’t hold against him. As in Aeschylus’s telling, Sater’s Prometheus — one of the Titans — is chained to a cliff on orders of Zeus, who is enraged that Prometheus has foiled his plan to destroy the human race. But Sater, in his thoroughly contemporary lyrics and his shaping of the classical text, has made Prometheus explicitly a prisoner of conscience as well, locked away at the end of the Earth, where he endures torture for defying a tyrant.

“He’s the one that stood up for humanity, so . . . he’s the original Jesus, if you will,’’ Tankian said by phone from Los Angeles, where he lives. “But there’s many ways of looking at this story obviously as well, ’cause we’ve totally screwed up civilization and brought it to its knees as humanity, so you can also kind of defend Zeus here.’’

Sater began working on his “Prometheus Bound’’ translation during the Iraq war, when he was feeling what he called “grave concern about the state of our nation.’’ He believes in art as “a weapon for peace,’’ he said, and the ART has very much taken up the cause. Working with Amnesty International, the theater is dedicating its production to efforts to free eight prisoners of conscience.

For Paulus, the Amnesty initiative embodies an interest in political theater that she said is “less about a specific political agenda’’ than about “a very deep passionate interest of mine to position theater in a way that touches people beyond it being an artistic experience.’’

It was 2000 when Paulus and Sater first met at the Sundance Institute Theater Lab, where he was working on “Spring Awakening’’ and she was working on a music-theater piece called “Kafka Songs.’’ They began collaborating on “Prometheus Bound’’ about four years ago, before Sater had decided whether it should be a musical.

From the beginning, however, they agreed that music would be a part of it — as it was, in some fashion, in ancient Greece.

“For me, the Greek theater is ritual, and ritual is visceral, and music is visceral,’’ Paulus said the other evening in her office, where drama texts share the bookshelves with opera recordings. “I feel like for this play to have its most powerful impact, it would have it with music.’’

But when Sater sent her his translation of Aeschylus’s play and asked her if she heard music when she read it, the music she heard was rock ’n’ roll.

“Could I have heard folk music, could I have heard a kind of classical, chamber sound?’’ she asked. “You know, you could’ve heard anything. But there was something about it that made me feel, ‘This is visceral, this is brutal.’ ’’

Tankian, a Grammy Award winner with System of a Down and an Armenian immigrant whose political activism has a social justice focus, seemed to both of them the ideal composer to give the show the sound it needed.

“When you listen to Serj’s music, he has that kind of anarchy and that rebelliousness and defiance, ’cause it’s rough and it’s aggressive. And then the genius for me of him is that it flips to this incredible, like, wailing and kind of pain and cry,’’ Paulus said. “It’s very, very ancient. As much as he’s a modern rock star, he has a cry in his voice that feels like [it’s] from another time.’’

“And Serj is so ironic and witty and wild and, you know, shaggy-haired and bacchanalian,’’ Sater said.

Like the production’s choreographer, Stephen Petronio — of whom Sater had long been a fan — Tankian is a newcomer to theater.

“I’ve never been a giant fan of musicals,’’ Tankian said, then laughed sheepishly at the admission. “Certain musicals I think are amazing, but it takes a lot of really great arrangement, I think, to hold my focus at a live performance of a musical.’’

Sater piqued Tankian’s interest in the project over lunch at a vegan restaurant in Santa Monica, Calif. Reading the script at home, Tankian was surprised by the contemporary resonance of its themes of tyranny and injustice.

“We live in a society where a lot of people don’t stand up for the right things, you know?’’ he said. “They don’t do the right things. And for whatever reasons, they believe that that’s what they need to do to get by. And Prometheus was the one that, you know, he took the punishment. He kept the course. He could have easily appeased the gods and Zeus and said something and [been] allowed to be free, but he didn’t.’’

With Sater, Tankian said, he worked on the music for the show “piece by piece.’’

Sater would send him lyrics and explain the emotions and the characters involved, and Tankian would either write something new — such as the ethereal choral music that’s part of the score — or fit the words to existing music. (AnnMarie Milazzo, who did the vocal arrangements for “Spring Awakening,’’ arranged the “Prometheus Bound’’ music as well.)

“I have a lot of musical archives,’’ Tankian said, “things that I’ve been writing for the past 25 years, of all sorts of colors, shapes, and sizes, you know, from classical to electronic to jazz to experimental to noise to punk — you know, goth. All sorts of stuff. So I would just kind of try to find the right soundtrack for each piece.’’

Sater, who works similarly when he collaborates with Duncan Sheik, said that the response to “Spring Awakening,’’ which by now has been performed in 25 countries, emboldened him as an artist. At the same time, he added, it has convinced him that with a greater platform comes greater responsibility.

“I think that the creation of every work of culture presumes that the cry in one heart will set off a cry in another heart, and another,’’ he said. “And I think that that’s what we’re setting out to do, is to activate one person after another and to awaken people around — you know, heart to heart, passing the fire, passing the flame from person to person around the globe — wake people up to resist, to stand up, to make a difference.

“That’s what the story of the Titan Prometheus is,’’ he added, echoing one of his own song lyrics. “It’s about someone who stands up for humanity, for the sake of humanity.’’