How high can developers jump?

Boston's buildings suffer in the process 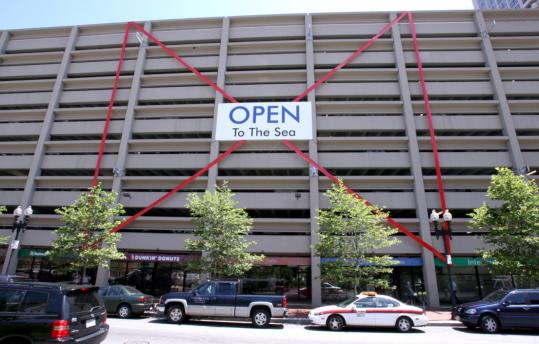 Don Chiofaro proposes to demolish his Harbor Garage and build a high-rise in excess of zoning laws. The city says the building will cast too long a shadow on the Kennedy Greenway. (Bill Greene/Globe Staff/File 2009)
By Robert Campbell Globe Correspondent / February 13, 2011

Boston’s city planners determine that new buildings on the ocean side of the Kennedy Greenway should be no taller than 200 feet. They arrive at that number after an 18-month study with lots of public input, and put it into the zoning code.

Then a developer, Don Chiofaro, comes along and proposes, on one of those sites, a building that would be 780 feet high. That’s just about the height of the Hancock Tower, Boston’s loftiest building.

Do all observers throw up their hands and say, “This is ridiculous? Why can’t you obey the law?’’

Of course not. That would not be Boston. Chiofaro’s proposal is taken quite seriously. Though not everybody likes it, nobody agonizes about the zoning issue. Who then, you cannot help wondering, is supposed to be planning the city?

The answer to that question tells you a lot about why we don’t get better architecture in Boston.

Let me say right off that I am among those who have no problem with a big building in this location. The site is currently occupied by the dismal Harbor Garage, which Chiofaro owns. The garage stands at the edge of the Greenway, which is now an empty grassland that looks as if it ought to be home to grazing llamas. It needs all the human activity it can get. The new building, most of which would be condo residences, would feed needed life into the Greenway.

Since that first proposal, Chiofaro has cut his design to 615 feet. But that’s still triple the zoning limit. So what’s going on?

What’s going on is that in Boston, as in other cities, legal heights under zoning are often kept low precisely for the purpose of making sure that every major new development proposal will be technically illegal. If a proposed new building violates the law, then the developer will have to come to the mayor for some kind of special permission. (The mayor controls the city’s planners and the zoning board.) And that’s the way any mayor wants it.

Once the mayor is in the loop, the development becomes the subject of a negotiation. A deal. A game of poker begins between mayor and developer. For the mayor, the object of the game is to extract as much money from the development as possible, in return for permitting greater height or bulk.

That’s the nub. Boston, like other cities, always seems to be on the verge of bankruptcy. With both federal and state aid now being cut, the crisis is unusually bad, but it’s chronic anyway. Notoriously, Boston relies heavily for its revenue on the property tax. But much of the real estate here is tax free, because it’s owned by hospitals, universities, the Roman Catholic Church, or other exempt entities.

So where can the city go for money? Ahhh. . . . It can make deals with developers. Zoning says 10 stories, the developer may say, but I need 15 to make a profit. OK, says the mayor, no problem. But in return come demands called mitigations or amenities. There will be a new park, perhaps, next to the building, to be designed, constructed, and perpetually maintained by the building’s owner. Maybe there will be underground parking. In some cases, the developer may even be asked to build and maintain new streets.

Beyond mitigations come contributions. The developer may be required to contribute to a public fund for, let’s say, renovating schools or building affordable housing. The city’s total take may easily mount into the millions. To generate the money, the developer can’t help stripping quality from the building. It gets bigger and the architecture gets dumber.

The result of all this is a lot of substandard architecture. Much of the South Boston waterfront looks like a poorly designed New Jersey office park. Big, boxlike buildings surrounded by cars or highways send a message that the money that could have been spent on architecture was spent somewhere else.

Back to Chiofaro. The developer’s original proposal did not look like a building, but like some kind of toolbox with a handle on top, as if a giant would someday pick it up and move it to another site. The current proposal, lower in height, is equally sketchy but more successful. My guess is that it will end up lower still.

Mayor Thomas M. Menino defends the Greenway zoning on the grounds that taller buildings will cast dark shadows on the park. Much as I admire many qualities of this mayor, that argument is bogus. This is phony zoning. Unless the sun changes its course, tall buildings on the water side of the Greenway will cast no shadows on it after about 11 in the morning. Afternoon shadows will fall on the ocean. And of course in summer, the season when people are most likely to be enjoying the Greenway, we don’t speak of shadows. We speak of shade.

It should be fun to follow the story. Chiofaro proposes to demolish the Harbor Garage and replace it underground. Surely in return for that enormous expense and public benefit, he deserves a break in the form of added height. But how much? What else will be demanded of him when the dealing’s done? If it ever is.

And of course there are many other players. Next door, for instance, stand the older apartments known as Harbor Towers. They are occupied, it sometimes seems, entirely by lawyers, active or retired. They, too, will have something to say about what happens to their view.

I hope that someday we will see residents pouring out of Chiofaro’s building to enjoy a busy world of city dwellers on and around the Greenway.

I do not have a solution to the problem of how Boston can pay for its public services without soaking its architecture. I’m just stating the problem. It’s one of the reasons we don’t build a better world.