The women of Pop 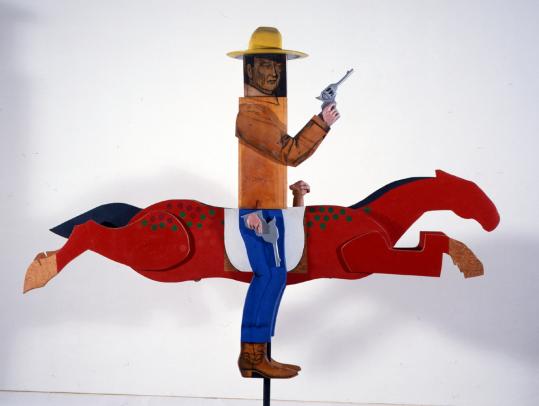 International in scope but nicely focused (there are 67 works by 24 artists), “Seductive Subversion: Women Pop Artists, 1958-1968’’ is the sort of smart, engaging, and revelatory exhibition we should see more of around here — and probably would, were it not for the innate conservatism of many of our major art institutions.

The show, at Tufts University Art Gallery, is the first modern thematic exhibition of any real ambition in these parts for ages. It features the work of artists — most of whose names won’t register with the wider public — who worked within the fairly porous parameters of the Pop Art movement in the socially, politically, and aesthetically convulsive 1960s.

The exhibition was conceived and organized by Sid Sachs, director of exhibitions at the University of the Arts in Philadelphia. It has been garnering plaudits in its two subsequent venues, first the Sheldon Museum of Art in Lincoln, Neb., and then the Brooklyn Museum of Art in New York. It was recently named “Best Thematic Show Nationally’’ by the US section of the International Art Critics Association.

Pop art’s heyday came before the onset of feminism’s second wave. As such, it was perhaps the last major art movement to systematically exclude or downplay the contributions of women (although many would say subsequent movements fared only marginally better).

Deliberately revisionist, this exhibition brings to our attention at least a dozen artists who deserve to be better known. This in itself is exciting. Niki de Saint Phalle, Vija Celmins, and Yayoi Kusama all have established reputations. But there’s no good reason such artists as Kiki Kogelnik, Rosalyn Drexler, Jann Haworth, Idelle Weber, Chryssa, and Dorothy Grebenak, and Marisol are not better known.

Marisol, in particular, is a bona fide star. She’s hardly unknown in the art world, but she ought to be a household name along with Roy Lichtenstein, Andy Warhol, and Claes Oldenburg. Here, unfortunately, she’s represented by just one work: a splendidly uncouth mixed media sculpture of a boxy John Wayne riding a wooden horse. Those who are keen to see more will have to wait for a Marisol retrospective slated to open at the Memphis Brooks Museum in 2014. (If the folks at the Museum of Fine Arts or the Institute of Contemporary Art have their wits about them, they will be pulling out all stops to bring it to Boston.)

I first saw “Seductive Subversion’’ in Philadelphia, where it was shambolically displayed across three separate venues, and can vouch for the superiority of the display at Tufts. Around 20 works have been added, and Amy Schlegel, director of galleries and collections at Tufts, has provided a helpful thematic overlay, grouping the works according to four common-sense themes.

Still, the result is by no means a perfect show. Much of the work cries out for conservation, and some of it makes you think its neglect was not entirely unwarranted. Unwittingly, the show reminds us that, for all its verve, much of the art produced under the rubric of Pop, by both men and women, was technically flimsy, politically naive, intellectually frivolous.

Pop always wanted to have it both ways. Just as such male Pop artists as Warhol and Britain’s Richard Hamilton seemed to waver between, on the one hand, mocking or critiquing mass culture and, on the other, reveling in it, female pop artists fell into a similar bind. The first part of the show conforms to type, gathering together works that seem to revel in seductive images of the female body, only to upend sexist preconceptions through exaggeration or sly shifts in context.

The show’s first work is a case in point. It’s a collage of hundreds of soft-core images of naked young women all looking directly out at the camera by Martha Rosler, the most overtly political artist in the show. Called “Hot House, or Harem,’’ the effect is reminiscent of Ingres’s “The Turkish Bath’’ and a zillion other male fantasies of limitless female availability.

Rosler is clearly attempting to convert the preposterousness of pornographic overload into accusation. But I’m not sure how well she succeeds. The tactic has something crudely obvious about it. And the women, after four decades of aggressive escalation in the pornographic stakes, look strangely innocent (at least of surgical enhancement) and, dare I say it, adorable.

More fun — and more effective in its deadpan wit — is Marjorie Strider’s “Triptych II, Beach Girl’’ of 1963. This playful parody of the girlie pinup ticks all the boxes of Pop: simplified and enlarged mass-media imagery, serial repetition, and, more obscurely, a fashion for “shaped’’ canvases — in this case, bikini-covered breasts made from sharply faceted wood that jut out from the canvas.

Converting only the girl’s breasts from two dimensions to three (they really do “pop’’) is a brilliant burlesque, at once absurdly broad and just subtle enough (one can imagine formalist critics of the day discussing the breasts’ cubist faceting) to create palpable unease.

Much of the best work in the show, however, transcends preoccupations with gender politics, coming from places more immediately personal, experimental, and urgently felt. Sweden’s Barbro Östlihn is a particularly interesting case. Her painting “Sunflower’’ hits the eye with the mysterious force and abstract sophistication of a mandala merged with a commercial logo. Its presence is as strong — and seductive — as anything else in the show.

But Östlihn was overshadowed by her artist and performer husband, Öyvind Fahlström (whose work she collaborated on), and by other prominent male Pop artists (she was friends with Robert Rauschenberg and Roy Lichtenstein, among others). “Sunflower’’ is presented here in a context that tries to link its flower petals with female genitalia and with the sexualized flower paintings of feminist icon Georgia O’Keeffe. But her work was not, in fact, much related to the body, as the Swedish art historian Annika Öhrner confirms in a catalog essay. Rather, she was interested in architectural facades, patterning, optical illusions, and photography.

Thus we see the danger of revisionist exercises like this one. Individual artists are often rescued from years of neglect only to be stuffed into boxes they do not really fit.

And Idelle Weber’s painting and related sculpture parodying the standard-issue urban professional man are brilliant. They hint at something dark and complex beneath the laminated glamour of workaday conformity — exactly the sort of thing “Mad Men’’ has been trying to explore on TV.

To reiterate: This show is smart, it looks great, and it’s got plenty of surprises. A better show on the same theme is easy to imagine, and it might come along one day. But don’t hold your breath.