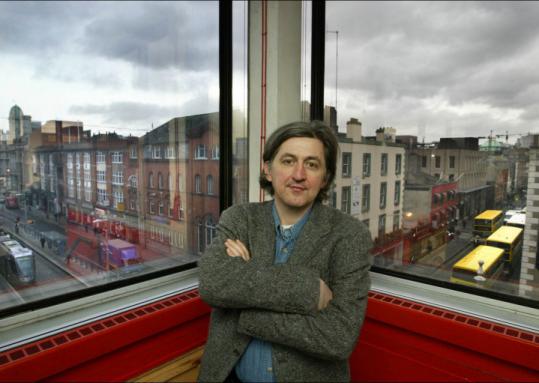 Fiach Mac Conghail is walking in the footsteps of William Butler Yeats, and, as with all things Irish, those steps eventually lead to Boston.

One hundred years ago, the great Irish poet arrived in Boston, looking not so much for a muse as for a benefactor for the fledgling Abbey Theatre in Dublin, which he had cofounded eight years before.

Now Mac Conghail, director of the Abbey, is on a mission similar to the one Yeats brought here in 1911: He’s looking for a way to tap into both the Irish diaspora and theater lovers in general to help Ireland’s national theater survive the country’s economic meltdown.

Facing a serious budget shortfall, Mac Conghail is looking to Boston for fund-raising and to create partnerships. He wants to establish cultural exchanges, especially with colleges and universities, and to put on productions. As part of that effort, Mac Conghail has teamed up with ArtsEmerson to bring the Abbey’s production of Mark O’Rowe’s “Terminus’’ to Emerson College’s Paramount Theatre tonight through Sunday — the first stop in an international tour.

When Yeats came here a century ago, the Abbey was struggling to establish itself. Its first American tour in 1911, which kicked off in Boston, was crucial to surviving the tumultuous decade ahead that would see rebellion, a war of independence, and a bitter civil war — all of which would provide fodder for Irish playwrights over the next century.

Yeats was there on opening night at the spanking new Plymouth Theatre on Stuart Street, where the Transportation Building now sits. He was greeted warmly by the mayor, John “Honey Fitz’’ Fitzgerald, the future President Kennedy’s grandfather. The Boston and US premiere of “The of the Western World’’ drew catcalls from some in the audience who objected to the salty language and supposed attack on Irish womanhood. (That was a considerable improvement over the riots that greeted the play’s world premiere in Dublin four years earlier.)

A headline in the morning Boston Globe of Oct. 17, 1911, noted that “Representative Boston Men Criticise ‘The Playboy of the Western World.’ ’’ By that evening’s Globe, a more tolerant, less censorious headline appeared over a story about the play: “Doesn’t Need Expurgation.’’

“From the start, Boston has been something of a welcoming, safe haven for the Abbey,’’ Fiach Mac Conghail (pronounced Fee-ick Macca-neel) said last fall, nursing a beer at Jacob Wirth’s, a block down from the site of that first Boston performance.

But what Mac Conghail didn’t know until he did some research is that Yeats did more than shake hands and pose for photographs at the Plymouth Theatre. Yeats climbed the stairs of brownstones in Back Bay and Beacon Hill, he lunched at the tony men’s clubs along Commonwealth Avenue, and he flattered every Boston dowager he met. Yeats, whose verse was priceless, put the arm on everybody worth something. He raised money like no one’s business.

Now Mac Conghail, the Abbey director since 2005, is bringing “Terminus’’ to the Paramount, just a few blocks and a century away from the Abbey’s maiden tour. The production is part of a wider effort by Culture Ireland, the Irish government’s arts agency, to reintroduce Irish arts to American audiences. More than 400 events are planned in some 40 states over the year, part of something called Imagine Ireland, a smorgasbord of theater, music, film, dance, literature, and visual arts. The Druid Theatre, Ireland’s other great theater company, based in Galway, is also on tour, bringing Martin McDonagh’s “The Cripple of Inishmaan’’ to the Paramount with ArtsEmerson in a run that ended Sunday.

While it is one of the world’s most recognizable and respected theater brands, the Abbey has survived largely on government subsidy. Now, like many institutions in Ireland, the government is broke. Mac Conghail said it takes about $14 million a year to run the Abbey. The government provides about half that amount, and the box office produces between $3 million and $4 million. Mac Conghail needs to make up a $3 million to $4 million shortfall, and he hopes to do so in America. He says there is precedent.

“The Abbey wouldn’t have survived its first 25 years without’’ the United States, says Mac Conghail. “The diaspora funded the Abbey at the start, before there was a functioning government that could step in. Yeats was a great poet. And he was a pretty good fund-raiser, too.’’

In addition to his talks with Emerson, Mac Conghail has had conversations with officials at Boston College, which has an extensive Irish studies program and has an office in Dublin.

Mac Conghail wants to offer American students the chance to study at the Abbey. He wants Abbey actors and staff to engage with American universities and cultural institutions.

“This is still very much a work in progress,’’ Mac Conghail said by phone from Dublin last week. “We’ve had ongoing meetings with Boston College. We’re still sussing ourselves out, our relationship with Emerson. And obviously we’re looking at the whole US, not just Boston. There’s two reasons we’re looking to America: for a cultural exchange, and to tap into a network of support, both educational and developmental. But there is a long-established, historical link with Boston and the Abbey. It’s natural to start in Boston. It’s amazing how Irish culture can reengage with Boston so quickly.’’

Twelve years ago, while at the American Repertory Theater in Cambridge, Orchard helped create an exchange program with the Moscow Art Theater School, sending 25 to 30 students to Russia each year. That program is still running, and Orchard thinks a similar program with the Abbey is a natural in Boston.

“The Abbey Theatre has a deep cultural resonance in this community,’’ Orchard said. “I would think there are students here who would want to spend two or three months at the Abbey.’’

Thomas Hachey, director of the Center for Irish Programs at Boston College, thinks the same. Hachey and professor Philip O’Leary, who teaches English at BC and is an authority on Irish language and culture, met with Mac Conghail yesterday, when Mac Conghail returned to Boston. Hachey said BC sent students to the Abbey in the 1990s, but the program ended a decade ago.

“I think there’s a possibility of resurrecting that, and we’re very open to Fiach’s ideas,’’ said Hachey.

Mac Conghail’s sudden need to prioritize the Abbey’s finances is, like walking in Yeats footsteps, something of a case of back to the future. When he took over the Abbey, the company was deep in financial and institutional crisis. He inherited a $5 million debt and a company reeling from poor morale. Mac Conghail, the first Abbey director who was considered more an impresario than an artiste, was widely hailed for quickly turning the theater’s fortunes around.

Now Ireland’s sudden, dramatic economic downturn has forced him to reimagine everything.

“When it comes to the arts, the Irish have always punched way above their weight,’’ Mac Conghail said. “With everything else going on, the arts have never been more important to Ireland.’’

“Terminus’’ is at the Paramount tonight through Sunday. Tickets: 617-824-8000, www.artsemerson.org. Kevin Cullen, a Globe columnist, is the Globe’s former Dublin bureau chief. He can be reached at cullen@globe.com.

Cinemania: heaven
If I were to choose my favorite song about the sweet hereafter, it would probably be “Heaven” by the Talking Heads. But if I were......
More in Culture Desk
Your comment is subject to the rules of our Posting Policy
This comment may appear on your public profile. Public Profile FAQ