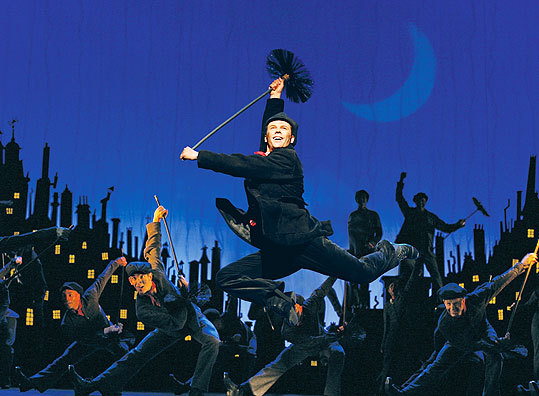 BEVERLY HILLS, Calif. — Walt Disney’s creative team had been laboring for more than three years on the movie adaptation of “Mary Poppins,’’ back in the early 1960s, when himself let them in on a little secret: P.L. Travers, the British author of the children’s book that was their source material, hadn’t actually agreed to let them make the film.

Travers had given Disney an option to develop a script, yes. But if they wanted the movie to go ahead, they would have to persuade her.

“She didn’t realize that what we were doing was not trying to destroy her books,’’ composer Richard M. Sherman said on a recent balmy afternoon, sitting in the living room of his Tudor-style home just off Sunset Boulevard. With his older brother, Robert B. Sherman, he was half of the team writing the music for “Mary Poppins’’ — music that ultimately would win them two Academy Awards in 1964, for best score and best song (“Chim Chim Cher-ee’’).

Deep into the project, Travers’s habit of meeting their every idea with a “no’’ was well known to them.

“One day,’’ Sherman recalled, “we were walking down to lunch — I’ll never forget this — and I said, ‘Pamela, you must understand something. We do not intend to even touch your books. Your books will always be there, sacrosanct. They will be there forever. More people than ever in the world are going to read your books because we’re telling a story based on your books. It is not your story, no. But it is your books and your characters that we’re talking about.’ ’’

It was Travers’s lawyer, finally, who convinced her that granting Disney permission would make her a wealthy woman, said Sherman, who is a vigorous and congenial 82. His own argument to the author was on his mind because of another “Mary Poppins’’ adaptation: the stage musical, which is coming to the Boston Opera House Feb. 17 for a five-week engagement.

The show, which premiered in London’s West End in 2004 and has been running on Broadway since 2006, is not merely the Disney movie reworked as live theater. Based on Travers’s stories and on the film, it has a book by Julian Fellowes that follows a somewhat different plot, and it’s set to original Sherman brothers music as well as new songs by the British team of George Stiles and Anthony Drewe. Stiles, the composer, and Drewe, the lyricist, also expanded several of the Shermans’ songs, including “Chim Chim Cher-ee’’ and “Supercalifragilisticexpialidocious.’’

Initially, the prospect of a “Mary Poppins’’ musical adapted by others did not thrill Sherman, though of course the film, too, would still be there, sacrosanct. Eventually, he came around.

“You have to grow up. You have to be mature about it. You have to overcome your natural resentment,’’ he said, and laughed. “When I first heard of the fact that this new team was going to come in and do new material and add to our material, I was a little kind of antsy and worried about it.’’

He wasn’t the only one. From childhood, Stiles and Drewe had known the music of the Sherman brothers, whose film credits include “Winnie the Pooh,’’ “Chitty Chitty Bang Bang,’’ “Charlotte’s Web,’’ “The Jungle Book,’’ and “Snoopy Come Home.’’ The Shermans also wrote the song “It’s a Small World.’’

The brothers’ “Mary Poppins’’ tunes are “Oscar-winning songs that everyone knows, so it’s a huge dare to go in and change them,’’ Stiles said by phone from the London office of Cameron Mackintosh, who is producing the musical in partnership with Disney, the corporation.

It was Disney, the man, who in 1960 personally hired the Sherman brothers as staff songwriters, the only ones he ever had. Not long before, he had placed Travers’s book in the hands of “the boys,’’ as he called them. He asked them to read it and tell him what they thought of its dozen tales about the magical nanny who descends on Cherry Tree Lane.

“They were filled with delightful characters, wonderful situations, and not a single strip of a story. Nothing. There’s no story line,’’ Richard Sherman recalled. “The only thing that gives it any kind of bookends is on the east wind she flies in, on the west wind she flies out, and in between she has adventures with the kids. But why she comes and why she leaves, nobody knows. Well, Mrs. Travers — we learned — was very strange like that.’’

So the brothers cobbled together a story line and wrote a half-dozen songs. One of them, “Feed the Birds,’’ became a favorite of Disney. When, over the years, he would call them into his office late on a Friday afternoon and say, “Play it,’’ they knew he wanted that song.

Stiles and Drewe, some of whose musicals have been staged locally at North Shore Music Theatre, started writing together 28 years ago at college. In adapting “Mary Poppins’’ for the stage, Stiles said, the challenge was to create the sense that “one singular intelligence was at work rather than two sets of songwriters.’’

After the first draft of the musical was complete, in spring 2003, the producers flew Sherman to London to meet the new team and hear some of what they had written.

“It was the most nerve-racking day, because we’d played with their songs — because we’d been given carte blanche to do so,’’ said Stiles, who saw when he finished that tears were streaming down Sherman’s face. “I thought, we’ve either won or we’ve upset one of the nicest people I’ve ever met.’’

They turned out to be tears of joy, which made Stiles cry as well, he said.

A few weeks later, Stiles and Drewe played their songs for Robert Sherman, now 85 and living in London.

He and Richard have long been estranged, a delicate matter that is the subject of “The Boys: The Sherman Brothers’ Story,’’ a 2009 documentary made by Gregory V. Sherman, Richard’s son, and Jeffrey C. Sherman, Robert’s son. The younger Shermans had sought to solve the mystery of the rift, and perhaps mend it, with the film. It accom plished neither.

These days, Richard Sherman said, he and his brother correspond, and they still have some hopes for projects of theirs that have yet to be produced. But once upon a time, they were such close collaborators that they didn’t apportion credit to one for music and the other for lyrics.

“We really sat in the room together and worked,’’ said Sherman, who would take his place at the piano while his brother scribbled at a desk. “And it was like one mind: We’d fuse together. But we came from different directions. We used to call it a stereoptic look at things because we had two ways. We’re totally different personalities. I’m very talkative, as you can tell,’’ he laughed, “and he’s very quiet. He’ll say one sentence — but it’s a good sentence.’’

Of the music the Sherman brothers wrote for the “Mary Poppins’’ film, a substantial amount did not make it into the musical, and some that did has been altered. But Richard Sherman, with his memories of P.L. Travers, has consciously adopted a positive attitude about that.

“You have to look at the bright side,’’ he said. “I mean, I have nine of the songs we wrote in the play, and it’s a great smash hit, and they did wonderful songs, so, gosh, let’s be happy and live together.’’

(Eric Grigorian for The Boston Globe) Richard M. Sherman, who co-wrote the music for the "Mary Poppins" movie.