'Ballast of our lives' 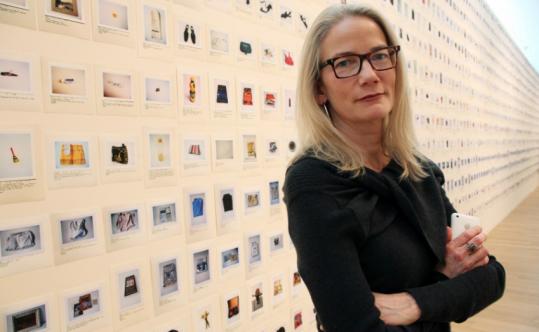 "When you think about it, it's really these small moments that make up most of our life," says artist Rachel Perry Welty. (Michele McDonald for The Boston Globe)
By Cate McQuaid Globe Correspondent / February 4, 2011

LINCOLN — Rachel Perry Welty captures and culls the utterly disposable, crafting it into conceptual art that asks us to examine who we are, what we value, and the traces we leave in our wake. In Welty’s first solo show, “Rachel Perry Welty 24/7’’ at the DeCordova Sculpture Park + Museum, “Karaoke Wrong Number (2005-2009)’’ has her on video, lip-synching messages left on her answering machine. “Deaccession Project’’ documents her ridding herself of an object each day. Then there are Welty go-tos, the stuff of several pieces: twist-ties, fruit stickers, and advertising circulars. The artist, 48, lives in Gloucester and New York.

Q. You’re starting with stuff that we don’t even think about when we see it.

A. I’ve always been interested in the overlooked. In order to get on with life we look over and look past these things, these experiences. When you think about it, it’s really these small moments that make up most of our life. We’re not engaged in deep despair most of the time. We’re not engaged in incredible, ecstatic joy most of the time. So, really, I think of it as the ballast for our lives, these small moments.

Q. It feels somehow intimate. Partly because a lot of the stuff you’re working with is small. But also because it’s so ordinary.

A. It is. And it is very personal. Privacy is an issue I’m interested in. The karaoke wrong number video is dealing with that. People are leaving their information for me, not knowing. They are just making the assumption that that information is going to get to the right place. It’s sort of poignant. We shed information as we move through our lives, and we don’t necessarily think about where it goes and what happens to it. Then, I’m doing something with it. I’m using it.

Q. Have you heard from any of the people who have left you a message?

A. I got a phone message from someone, and all I heard were the first few words. “Hello Rachel. My name is Ryan.’’ I just about fell off my chair. He went on to explain that he’d been at the ICA with his girlfriend, and they saw the video, and my heart sank. I thought, he’s going to sue me, or be really annoyed. And he burst out laughing. One of the messages was meant for him.

Q. You worked in advertising before you went to art school. Did that influence what you do now?

A. Possibly that, but I also wonder — my parents never let us have junk food. TV was severely limited to the educational channel. I wonder if I’m drawn to what I grew up not having access to. We lived in Japan. That was such an interesting contrast of cultures. There’s that whole Zen piece, but there’s also the craziness of the consumer culture there.

Q. Tell me about “Deaccession Project.’’

A. It started Oct. 5, 2005. I think I was overwhelmed at the moment with all this stuff that we had, and I thought what if just one thing a day, I’ll get rid of it. I chose one thing, and decided that I was going to photograph it, and then print it out and paste it up and give everything a number, a date, a time, a title, a description. Some days, it’s as pathetic as just a paperclip, because that’s all I can think of. Then some days, it’s the silver platter that belonged to my grandmother that I just don’t like, and I don’t use, and I don’t want. Things come in every day, and how much goes out? I have probably given away three dumpsters full of stuff.

Q. How many twist-ties did you have to accumulate for “Lost in My Life (Twist Ties),’’ a photo in which you’re virtually camouflaged in them?

A. Want a guess? Tens of thousands?

Q. Do people give you twist-ties?

A. They do. I get little packages in the mail. Or I’ll be at a party and someone will hand me a little baggie full of twist-ties.

Q. Why do you find this stuff engaging? Why would you start collecting twist-ties?

A. Well, I was initially captivated by the color and the line. I found about eight of them and I strung one to the next, and I hung it on the key rack, just because I wanted to see it. I ended up thinking, oh, I need more. So I asked one of my friends, and she had a huge bag, and that snowballed. I feel like if [after seeing my work] somebody looks at a twist-tie differently, then I’ve done my job.

Interview was condensed and edited. Cate McQuaid can be reached at cmcq@speakeasy.net