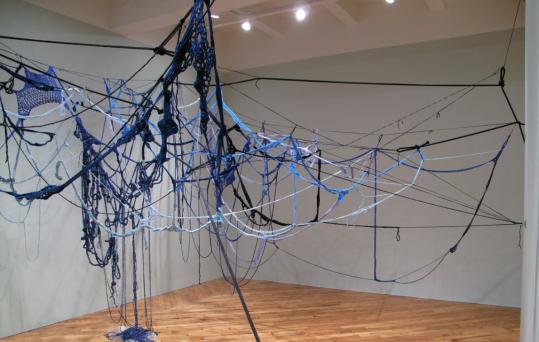 The yarn in Sheila Pepe’s latest installation at Carroll and Sons is loopy and droopy, crocheted, knit, or just hanging in shades of blue, forming a three-dimensional handicraft abstract expressionist work that fills the gallery space. Pepe started with an armature of black cord and black shoelaces, and then draped and knotted her yarn pieces over, onto, and around it.

If you knit or crochet, come on down. Pepe encourages hook and needle workers to either add to the exhibit with their own handiwork, or start their own project with Pepe’s yarn and take it on home.

“Our goal is to leave just the black shoelaces and cords,’’ said gallery owner Joseph Carroll in an interview.

So get there early, before too much of the piece has departed the gallery, because it’s worth seeing in its most elaborate state. Called “Common Sense in Boston,’’ it is soft and domestic, yet also exuberant, splashy, and occasionally creepy. It’s impossible to pass through without encountering strands hanging like cobwebs. The work blends the dramatic gestures of abstract expressionism, associated at its height with a particular masculine bravado, with techniques and materials associated with women’s work.

The call to knitters also seems traditionally feminine, as if Pepe’s hosting a knitting bee. At a commercial gallery, art is a commodity. Objects have a weighty value that isn’t merely monetary; they have been carefully crafted for nuance and beauty, and so it’s rare that part of the process is to give it away, bit by bit, until it’s nearly gone. Here, too, Pepe makes an improbable conflation — between a canny conceptual conceit and warmhearted community outreach.

For good measure, she has some small sculptures on view, pieces that are both gaudy and deliberately homely. “Pink Shoelace Drawing #1,’’ made of sewn shoelaces, looks like a fleshy organ. The aglets in the shoelace drawings are impertinent, protruding here and there, more defiant than fringe. “Grey thing with dangly bit on chain,’’ made of painted fabric, metal, and wood, looks to me like a professorial slug with a cherry-red head, giving a demonstration with a large splinter of wood hanging on a chain. Ridiculous yet dignified.

Drawing in others We don’t usually associate drawing with public art. Sculpture, yes. Murals, sure. But drawing, generally, is a more intimate act with a more delicate product. “Drawing in Public,’’ curated by Liz K. Sheehan at Cambridge Arts Council’s CAC Gallery, shows how drawings can engage the public.

Both Alex Rheault and Cassie Jones invite visitors into the gallery to draw. Like Pepe’s, their art is in part conscious social engagement. Jones has mounted a grid of her own drawings in acrylic on a translucent backing; they’re funky, colorful and radiant, and prompt the viewer to find patterns. She also has “Drawing Exchange,’’ in which viewers may trade one of their sketches for one of hers. Rheault’s “drawing room’’ invites visitors to make and post drawings according to a theme of the week.

These participatory works are less visually engaging than the ones made simply to be seen, like the Beehive Design Collective’s large-scale screenprint “The True Cost of Coal’’ about mountaintop removal coal mining in Appalachia. The collective goes into a community, conducts interviews, and makes drawings that lead to a screenprint mural. This one is a dense whirlwind of dark and fanciful imagery, packed with political narrative.

Astrid Bowlby’s burgeoning cut-paper installation “The Clouds Are Full of Rocks’’ is site-specific. It’s meant for this gallery space, which makes it public art only in the sense that the gallery is in the Cambridge City Hall Annex. Bowlby fills a corner with cones and columns and lacy piles of cut paper. Numbers and letters are posted on the wall, and drawn and scribbled in black on the paper pieces. The piece is captivating; it has a basic architecture, but it’s wildly organic, growing and spreading with seemingly no plan. I don’t think it’s truly public art, but it is a spectacle.

Psychedelic drops John Dempcy paints in droplets. For his show at Walker Contemporary, he drops fluid acrylic on a wet surface. The result is psychedelic: Concentric blossoms in brilliant tones explode in wayward columns over streaky grounds that suggest depths of water.

They don’t look like paintings. I would have mistaken them for glossy digital prints. “Coronado’’ looks like a scan of crushed flowers, or an enlarged image of cellular activity, with streams of bright pink and red dots crowding into one another, fiery blots of yellow around rosy centers, and mushroom-gray and purple doughnuts, all against a watery ground of red, yellow, and green.

The colors, and the crispness of the drops against the swarming murk of the background, add to the trippy quality of these paintings, but it’s also that the drops look like eyes, dozens of them gazing unblinking back at the viewer. Material drives Dempcy’s paintings: How will the wet paint dry? How will the drop ripple outward? Each piece is a gamble. He used the same technique in his last show here in 2009, but the works were more orderly and restrained. These are better. He’s taking more risks. The stakes are higher.