Nothing hidden from ‘Neighbors’ 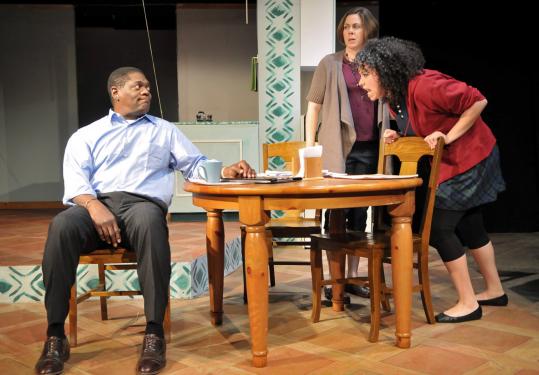 “Race is an illusion!’’ shouts Richard Patterson, a black professor, at Jean, his white wife, in “Neighbors,’’ now at Company One. “If you ignore it, it will go away!’’

By the time Patterson makes that assertion, his life has already been turned upside-down by the impossible-to-ignore arrival in his neighborhood of a family of minstrel performers who represent a challenge to everything the professor holds dear.

Playwright Branden Jacobs-Jenkins throws a lot against the wall in “Neighbors.’’ Some of it sticks; some of it just goes splat. But this intriguing blend of over-the-top satire and family drama serves emphatic notice that its young writer is a force to reckon with.

Jacobs-Jenkins, 26, who is African-American, deploys racist stereotypes in “Neighbors’’ not simply as shock effects designed to make audiences uncomfortable — which they do — but to explore thorny questions of racial identity. Even in the age of Obama, Jacobs-Jenkins reminds us, invidious racial assumptions remain embedded in the culture, part of the legacy handed down by forms of popular entertainment that, while no longer respectable or even permissible, once had a significant hold on the national imagination.

Along the way, “Neighbors’’ also manages to track the step-by-step disintegration of Richard and Jean’s marriage, and Richard’s alienation from the teenage daughter he thinks he is protecting.

In juggling these combustible elements, director Summer L. Williams holds nothing back, amping up the energy and creating a general atmosphere of disorientation that seems to mirror Richard’s state of mind.

The professor is played by Johnny Lee Davenport, who made a memorable impression in a small role as a grieving father in the Huntington Theatre Company’s recent production of “Vengeance Is the Lord’s.’’ In “Neighbors,’’ Davenport brings a desperate urgency to his portrayal of a very different sort of paterfamilias, one whose bluster cannot conceal his insecurity, driven by a sense that he is in constant jeopardy of losing his precarious foothold on the ladder of professional success — and, with it, the identity he has tied to his upward mobility.

An adjunct professor of classics at a university, Richard is struggling to get hired and win tenure. Jean, who is played superbly by Christine Power, is also a bundle of insecurities and thwarted ambitions; she stopped writing poetry and subordinated her career to that of her husband, and now is having second thoughts about that decision.

They live with their 15-year-old daughter, Melody (Lori Tishfield), in a rented house in an upscale neighborhood whose inhabitants include the university’s dean of faculty and academic provost. And then the Pattersons get some new neighbors: an African-American family who perform in a traveling minstrel show.

The family, who are made up in blackface, include the stout Mammy Crow (Valerie Stephens); a top-hatted uncle, Zip Coon Crow (Equiano Mosieri); and Mammy’s three children, Sambo Crow (Jesse Tolbert), Topsy Crow (Japonica Brown), and Jim Crow Jr. (Tory Bullock), who wants no part of performing in the family show despite his mother’s insistence that it is his “destiny.’’

Having named his characters with an eye toward maximum provocation, Jacobs-Jenkins goes still further, weaving deliberately retrograde routines by the Crows throughout “Neighbors.’’ One involves a pantomime with a watermelon; another involves the singsong recitation of offensive racial epithets.

Richard responds to their arrival in his neighborhood with one of those epithets, muttered but still explosive. Later, he fumes to Jean: “People will see them and . . . think we’re related!’’ His antagonism builds when his daughter gets involved with the quiet, bashful Jim Crow Jr., and Zip starts popping over for tea with Jean when Richard is not at home. Zip, portrayed subtly by Mosieri, is a suave and perceptive figure, for all his outlandish appearance. He projects such a sympathetic understanding of Jean that she is soon asking questions about her marriage that will prove to have no satisfactory answers.

In the resonant finale, the Crows deliver a pointed message about racial stereotypes, the weight of history, and the pernicious effect of cultural expectations. By that point, it’s clear that Jacobs-Jenkins wants the audience to leave “Neighbors’’ asking themselves a few hard questions, too.