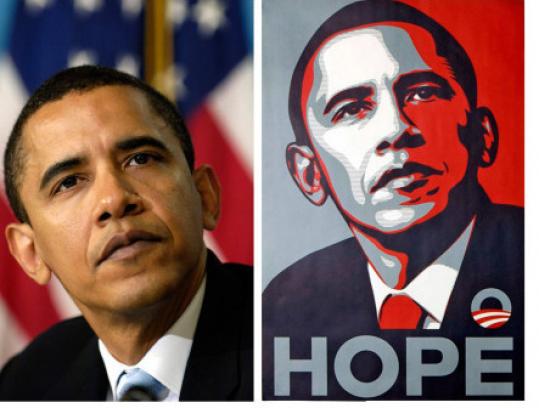 After a two-year court battle, the copyright infringement case against Shepard Fairey — over his use of an Associated Press photographer’s image of Barack Obama for his “Obama Hope’’ poster — ended with the two parties agreeing to settle.

Neither side has had to concede wrongdoing, but Fairey, who stenciled the AP photograph of Obama to make his poster, agreed not to use any more AP images without first receiving a license to do so.

His argument — that he was simply using the appropriated image under fair use in the tradition of countless other artists throughout art history — has not been rejected by the law, nor has it been upheld.

Fairey, a street artist, political activist, and entrepreneur, was the subject of his first museum retrospective at Boston’s Institute of Contemporary Art in 2009. His “Obama Hope’’ poster became famous around the world after it was used during Obama’s campaign for the presidency, converted into stickers and T-shirts and used to raise large sums of money. A version of the poster was subsequently acquired by the Smithsonian Institution in Washington, D.C., and displayed in the National Portrait Gallery.

The AP, wanting to protect its own revenue stream, claimed that Fairey had copied its photograph.

The case against Fairey, who had initially sued the AP seeking a declaration of legitimacy and was then countersued, was complicated when it was revealed that Fairey was under criminal investigation for lying about which image he used and suppressing evidence.

The two sides will henceforth share the right to make and sell Obama Hope posters.