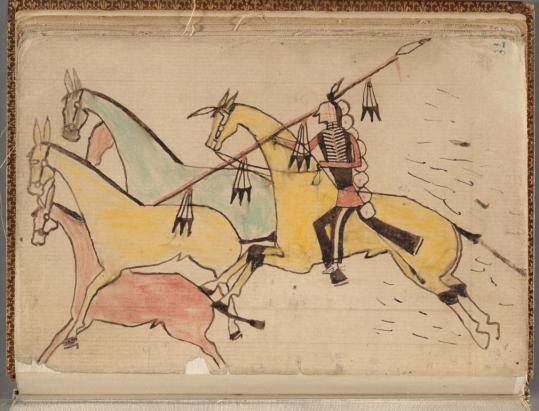 CAMBRIDGE — About five years ago, the librarians at Harvard University’s Houghton Library realized they had something special on their hands: a Plains Indian ledger book, filled with drawings made by Lakota Sioux of their battle exploits. Ledger drawings — pictographic art made by Plains Indians in the 19th century, often in accounting books acquired from Euro-Americans — are not uncommon artifacts, but it is unusual to find them bound in their original context.

The book, a goldmine of a historic document, launched research resulting in “Wiyohpiyata: Lakota Images of the Contested West,’’ an exhibit at Harvard’s Peabody Museum of Archaeology and Ethnology co-curated by the museum’s Castle McLaughlin and Butch Thunder Hawk, a Lakota artist who teaches at the United Tribes Technical College in Bismarck, N.D. It’s a riveting dip into Lakota warrior culture, which imbued warfare with spirituality, illustrating how one particular band of Lakota weathered the history of westward expansion sweeping across the Plains, pitting native warriors against US forces.

The book was reportedly discovered as soldiers cleaned up after the Battle of Little Bighorn in June 1876. An army private found it in a funerary lodge still standing in a deserted Lakota village. One of the dead there had a sack of mail in a canvas bag beside him, and on top of that lay the ledger book. The book’s discovery at a gravesite may make it subject to the Native American Graves Protection and Repatriation Act, McLaughlin said in an interview. If Harvard and Lakota researchers determine that it is, the book will go back to the Lakota, she said.

The private snatched the book and later passed it on to a Chicago Tribune reporter, James “Phocion’’ Howard, who titled it “The Pictorial Autobiography of Half Moon, an Unkpapa Sioux Chief.’’ He bound the book in leather, penned an introduction, and inserted prints, including a ghastly image of Half Moon, with high cheekbones and fury in his eyes. In time, it landed in the hands of a book dealer, and then a Harvard alum, whose sister left it to the university in 1930.

Half Moon, it appears, was pure fiction, devised to appeal to a public fascinated with Sitting Bull, the Hunkpapa Lakota who helped defeat Custer at Little Bighorn. When McLaughlin and Thunder Hawk examined the book, they determined that at least five artist-warriors contributed drawings during the 1860s and 1870s, perhaps all members of the same fraternity of warriors. Howard had made a Western assumption that the book was the product of a single artist.

“Wiyohpiyata’’ (pronounced Wee-ohk-pi-yata) deftly conveys differences between the Lakota cosmology and that of Euro-Americans. The title is the Lakota word for “west.’’ A medicine wheel maps the Lakota conception of the universe, in which west corresponds to the colors blue and black. Storm powers concentrate there, and west governs warfare. One side of the gallery features a mural of Bear Butte, where young warriors went on vision quests. The other side examines white Americans’ conception of the West and Manifest Destiny. A map of the Plains, with the Oregon Trail cutting across, lies on the floor, to illustrate cartography as a means of mastering and claiming territories.

Visitors can page through a facsimile of the book, which comprises 77 drawings. Several reproductions hang on the wall, amid Lakota artifacts from the museum’s vaults.

The exhibit, which opened in 2009, unfolds in sections that highlight Lakota warrior culture. The drawings, on paper and also on the elk-hide interior of a tipi, all boast of conquests. They’re flat and straightforward, drawn in graphite, colored pencil, and ink, and packed with telling detail, such as war paint and patterns on shields. In one, a warrior charges through a hail of arrows, holding a shield emblazoned with celestial symbols. Curator Thunder Hawk borrowed the image for his dramatic mural at the entry of the exhibit.

Specific garments indicate what band of Lakota a warrior came from. The uniforms and arms of their enemies are equally vivid. The detail has enabled the curators to posit that many of the drawings depict Red Cloud’s War, fought between Plains Indians and the US forces for control of the Powder River Country in the Montana and Wyoming territories between 1866 and 1868. They’re not strictly documentary; they’re more about creating legends.

Many warhorses were painted blue. Some Lakota rode blue roan horses. One suite of drawings pays tribute to a particular blue roan, identifiable by its dark legs and head and a flash of white on one foreleg. The drawings depict the warrior and his horse triumphing in battle, until, in the final one, the horse falls — a rare expression of loss and grief among these works. Thunder Hawk has carved a wooden effigy of that horse, a stick to be used in ritual dance, which the drawings circle.

The curators use contemporary Native American art such as this, as well as audio and video — sometimes merely atmospheric rather than didactic, such as a video of blue roans romping in windswept pastures — to convey the Lakota approach to war and life. They have created an environment full of action and reflection — flying arrows, and the sounds of a rainstorm.

The ledger drawings, made by the warriors’ own hands, make the story of what happened to the Plains Indians in the 19th century dreadfully personal. They still communicate the evident intentions of their makers — to show the warriors as heroes.

Correction: Because of an editing error, this review used the wrong pronoun for Castle McLaughlin, associate curator at Harvard’s Peabody Museum of Archaeology and Ethnology. McLaughlin is a woman.

Clarification: Two photos of drawings in the exhibit "Wiyohpiyata: Lakota Images of the Contested West" were credited in the print version of this review to Harvard's Peabody Museum of Archaeology and Ethnology, where the exhibit is located. The drawings are from a book owned by Harvard's Houghton Library.