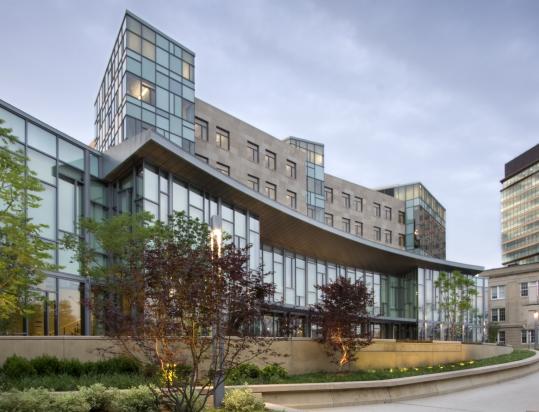 The new Sloan School of Management building at the Massachusetts Institute of Technology carefully imitates the colors and materials of the buildings around it. (Colins Lozada/Moore Ruble Yudell)
By Robert Campbell Globe Correspondent / January 9, 2011

Why would an institution create radically different kinds of architecture just a few years apart?

Case in point: MIT. Not long ago, MIT was a subscriber to what you might call the celebrity theory of architecture. It hired international star architect Frank Gehry to build its huge Stata Center for intelligence research. Then it hired star architect Steven Holl to design its also huge new Simmons dormitory.

Both those buildings were striking. Neither looked like anything anyone had ever seen before. That was the heyday of what was called “signature architecture.’’ Clients hired architects for their famous names and their well-known visual styles. MIT, like other institutions, was flush with money to spend on architectural ambition.

Now compare those with the latest at MIT. It’s the new building for the Sloan School of Management, MIT’s business school. The new Sloan is a place for MIT workaholics who don’t much care what architecture looks like.

The attitude is summed up in the words of Paul Asquith, a Sloan professor who helped lead the building committee. He says: “We told the architects that we care a lot more what people will think of the building when they leave at the end of the day than when they arrive in the morning.’’

I don’t want to exaggerate. The Sloan is a very good building. It’s just good in a different way.

Instead of standing out as a monument in the city, like Stata and Simmons, Sloan seeks to fit politely in. It carefully imitates the colors and materials of the buildings around it, from the greenish glass of a nearby office tower to the warm toned limestone of the original MIT. The designers were California architects Moore Ruble Yudell. In 2006, MRY won the prestigious national Firm Award from the American Institute of Architects.

The strength of the new Sloan is the way it mixes so many different activities in the interior. The hope is that the inhabitants — students, professors, visitors — will bump into one another a lot as they move around. Even the fire stairs are spacious and light-filled, so they too can become casual meeting space.

There are faculty offices, classrooms, seminar rooms, student study rooms, a faculty lounge, underground parking, much else. The heart of the building is a big double-height space on the ground floor called the Gallery. The Gallery includes a big restaurant, open all day to anyone from MIT, and it also includes study and social space. It’s intended as the new democratic heart of the school. Flooded with sunlight (a little too much, maybe, on a recent winter’s day), it enjoys a panoramic view of the Charles River and the city of Boston beyond.

The Gallery flings out corridors and bridges (not all yet built) the way a heart sends out arteries, linking it with two older Sloan buildings to create a single interconnected Sloan School complex.

There’s a nice sense of democracy in the offices. There are 206 of them and they’re all exactly the same shape and size, 210 square feet. Instead of being strung out on a corridor, the offices are grouped into “pods’’ of about 20, forming little communities within the larger Sloan world. Between any two pods, there’s a shared seminar room. And seen from outdoors, the seminar rooms, stacked atop one another, form towers of glass that pull daylight into the interior.

Where Sloan isn’t so strong is in the landscaping. The building is treated as if it were sited not in a city but in a corporate suburban office park. It’s pulled way back from the street on one side and from the river on the other. The two resulting open spaces are sliced up into shapeless, useless patches of grass, paving, and planting. Formal curved walls and ramps bear no relation that I can see to the building, the street, or the river. Halvorson Design Partnernship, a prominent Boston landscape architect firm, was the principal designer.

MIT has never really had an outdoors, not one that anyone uses. That’s part of its DNA. The nearest thing to a public space, a place of social and cultural gathering, is the so-called Infinite Corridor indoors. I guess you could say that by messing up the outdoors, while supplying those new interior bridges and passageways, the designers of Sloan have respected the old DNA. They’ve created good space indoors, but they’ve failed to do it outside. The failure occurs at a moment when schools of architecture are suddenly full of talk about the importance of landscape in the design of cities.

Why is the Sloan so self-effacing, compared with the theatrical architecture of the era of the Stata Center and Simmons dorm? One cause, certainly, is the recession. But I think there’s a deeper one.

Years ago, when Stata and Simmons were being created, MIT’s president was Charles Vest. Vest made a statement I’ll never forget. Said he: “I believe that the buildings at this extraordinary university should be as diverse, forward thinking, and audacious as the community they serve. They should stand as a metaphor for the ingenuity at work inside them.’’

Should a building really be an audacious metaphor? I don’t think many would claim that today.

Put it this way: Should Albert Einstein have worn an inventive hat, one that could stand as an audacious metaphor for the ingenuity at work inside his brain?

In a world with so many huge problems to be solved, something is changing in architecture. Sloan makes the case for the background building, the one that’s here to do its job rather than flaunt its aesthetics.