THIS STORY HAS BEEN FORMATTED FOR EASY PRINTING
QUINCY 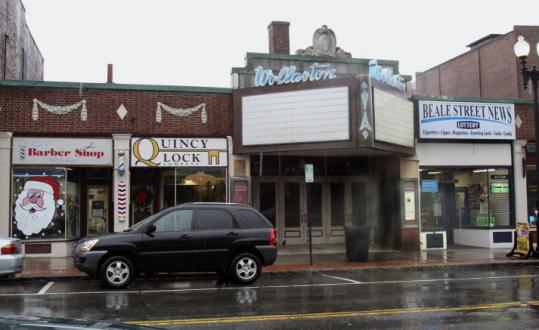 Quincy theater producer John M. McDonald Jr. says supporters of the Wollaston Theatre need a new approach to preserve the historic theater. Instead of waiting for City Hall to save the landmark, Quincy’s arts and business communities should join forces to raise funds to preserve the building and operate it as an arts center for the city, he urges.

The city can follow the example of others such as Boston and Newburyport that have turned historic theaters into homes for the arts and used them to revive commercial districts, said McDonald, who runs JM Productions, producing children’s theater and dinner theater in various venues.

“They were saved because somebody had the foresight,’’ he said. “It’s a shame that in this city we can’t put our choral society, our orchestra, art association, children’s theaters, and traditional theater in a local home.

“You need to rally the troops,’’ he added. “If one local business steps up to make the first significant donation to a ‘Save the Wolly’ fund, it will happen.’’

An effort to secure the Wollaston Theatre, a beloved 1,200-seat, old-fashioned theater that survived as a neighborhood film house until seven years ago, foundered recently when Quincy Center developer Street-Works withdrew its offer to buy the building. Street-Works said restoring the deteriorating building would cost an estimated $7 million.

Built in 1926 in elaborate period style to present both film and live entertainment, the Wollaston Theatre has a large screen, crystal chandeliers, stained glass, and original features such as an orchestra pit and an organ. When owner Arthur Chandler died two years ago, his wife put it on the market, and Mayor Thomas Koch induced Street-Works to get involved to save it from the wrecking ball.

McDonald, who has worked as a house manager at the Wilbur Theatre in Boston and a personal assistant for Broadway stars, contends that Quincy can follow successful preservation models based on collaborative fund-raising by arts groups, ordinary citizens, and businesses with a stake in the city. While a citizens group raises funds and pursues grants, the business community antes up in exchange for inducements such as naming rights.Ultimately, the theater should be run by professional managers as a performing arts center for the city, he said.

“I’m convinced the city needs to step back,’’ McDonald said. “The city is strapped.’’

Delvyn Case, director of the Quincy Chamber Music Orchestra, a small professional ensemble, said the theater has “incredible potential for a performance space’’ and could also anchor “a little arts district’’ in Wollaston.

“It would fit perfectly,’’ Case said, citing the theater’s nearness to an MBTA station. “There could be swanky restaurants.’’

The word at local performing arts schools is that it’s difficult and costly to stage live performances in Quincy.

Lisa Jones, owner of Lisa’s Dance Studio on Parkingway, said it can cost $20,000 to rent an auditorium and meet other expenses for a dance recital for hundreds of students. A performance space must have enough seating to accommodate all the family members a student invites, plus parking, air conditioning, and capacity for lighting and sound equipment.

“I would love to have a professional theater to rent for our performances,’’ said Teri Mangiaratti, owner of In Sync Center of the Arts on Adams Street, which teaches dance and music to 1,000 students. A renovated Wollaston Theatre would be an exciting option for a business that pays an average of $10,000 to rent auditorium space, she said.

“With sponsorship from the right businesses and thousands of audience members attending shows weekly, what a perfect opportunity for local businesses,’’ Mangiaratti said.

Vincent Famador, owner of Velocity Dance Co. on Billings Road, agrees. “If I had an opportunity to get Wollaston Theatre for our dance studio, I would do it in a heartbeat,’’ he said.

Locals tell him, Famador said, that the theater “gave a sense of old Hollywood in Quincy.’’

“Anybody who has resources and enthusiasm and a plan should be applauded with respect to saving the theater,’’ said City Councilor Doug Gutro, who represents the Wollaston district and has been a supporter of efforts to save the theater. “The question is the structure.’’

Potential donors to a Save the Wolly fund will have to ask themselves to whom donations would go, what the money is specifically for, and what the target figure is. “And, in the end, who is going to run the show?’’ Gutro said.

McDonald said answers to those questions will come from studying the models that have worked for other cities. He said he was issuing a “challenge’’ to all Quincy businesses to get involved in preservation efforts, and he asked them to contact him at jfm@jmproductionspresents.com.