A new take on past favorites

‘Curiouser’ highlights art of and inspired by the Victorian age 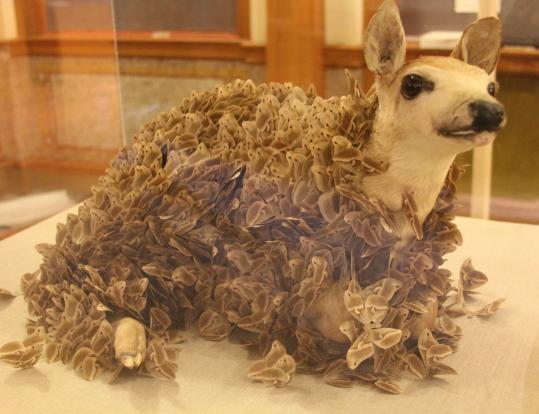 PROVIDENCE — On the second floor of the Museum of Natural History, a dramatic argus pheasant mounted in a display case spreads its speckled wings. The museum’s first director, James M. Southwick, owned the bird, and loaned it for exhibition in 1896, the year the museum opened. Then he sold it to Charles Smith, who had a large collection of stuffed birds, mostly native to Rhode Island. Smith ultimately donated that collection to the museum.

Today, many would find a private collection of stuffed birds creepy. But to the Victorians, such collections were de rigueur. As wall text near the pheasant notes, “there was scarcely a middle-class home that did not boast a bell jar full of birds, a terrarium replete with ferns, a shell or mineral cabinet, a butterfly collection, or a seaweed album.’’ That passion for collecting is viewed through the lens of contemporary art in a new exhibit at the museum, “Curiouser: New Encounters With the Victorian Natural History Collection.’’

Curators Erik J. Carlson and Erica Carpenter invited six artists to explore the museum’s vaults, which are filled with preserved insects, birds, shells, rocks, and more — many of which never see the light of the galleries — and to create art installations using some of the specimens.

“It lived up to our expectation of what would be down there, and how strange and weird it would be,’’ said Carlson on the phone from Maryland, where he was spending the holidays. “It’s a time capsule down there.’’

Most of the museum’s holdings date to the Victorian era, according to Carlson. The 1859 publication of Charles Darwin’s “On the Origin of Species’’ paired with the rapid expansion of Western interests around the world spurred a fascination with flora and fauna, both exotic and domestic. Schoolchildren and amateur naturalists reveled in taxonomy. As Carlson and Carpenter say in their exhibition essay, to the Victorians, natural history was pop culture.

For a show about a distant time, “Curiouser’’ is deliciously intimate. Maybe the artists related to those long-dead collectors and their fervor for creating something with meaning. At the center is the show’s most visceral and poetic piece, Jennifer Raimondi’s “Comfort.’’ Raimondi scanned a silk moth from the collection, printed out more than 700, cut them out, and draped them over a stuffed fawn. The fawn sits, head cocked alertly, as the soft brown moths appear to alight on its hide, like a fluttering, living cloak. It’s an eerie bit of magic realism.

Raimondi’s piece is the least didactic, but in a natural history museum, there’s nothing wrong with being didactic. Alison Owen and Susannah Strong deconstruct the systems of knowledge underpinning natural history and museology. In Owen’s two-part work “exhaustive to incomplete,’’ she first sorts through a box of labels lost to their objects, and mounts them on pins, like butterflies, according to style of handwriting or typeface; she’s classifying scraps of classification. Then she smartly deflates the sanctity of the museum’s collection by putting some of its specimens in a case with bits of natural history contributed by her friends and family, such as cockroaches, broken toys, and cat hair.

Strong, in “The Cabinet of Another Order,’’ delves into the imagination of a fictional amateur naturalist and museum volunteer, Gideon T. Burroughs. Each time Burroughs visited the vault, Strong tells us in wall text, objects would have mysteriously moved. The story feels particularly British, in the tradition of “Alice in Wonderland’’ and “Harry Potter.’’ Strong offers sketches and journal entries from Burroughs’s collection; he was creating a taxonomy according to the five senses. It seems a sturdy one — another system through which to understand the world.

Having read about Burroughs, when I stopped at Adrianne Evans’s “Conversation’’ and saw it pertained to the Victorian collector Albert Edward Foote, I thought I was headed down another fictional rabbit hole. But no: Foote was Evans’s great-great-grandfather, and a small cache of the museum’s collection came from him. It was a shock to Evans, who has no familial connection to Rhode Island, although she has lived here for 13 years.

Foote specialized in rock collecting. Evans recycles detritus from glassmaking projects — glass dust — puts it in the kiln, and makes, essentially, glass rocks. In “Conversation’’ she pairs her ancestor’s rocks with her own, drawing a strikingly personal connection across more than a century.

For all the labels, vials, and pins in the museum’s vaults, photographer Erik Gould suggests that nothing can be forever pinned down. His piece, “Extinction,’’ speaks to the loss of some of the species represented in the collection. Gould has mounted several specimens against light-sensitive material; over time, their silhouettes will appear. Now and then he switches out a bird or a starfish for something else — a sea horse, say. The silhouette of the removed object lingers, then fades, as light washes over it. For all the taxidermy in the world, nothing really lasts.

In “Describing the Shadows,’’ Lasse Antonsen places rows of still-feathered bird skins between printed lines of a thesis by French philosopher Roger Caillois, written in the 1930s, as fascism loomed. Antonsen’s piece examines how, in the dawn of the 20th century, order seemed to give way to violence. Of methodical investigation, Caillois declared, “its strictest duty is to undertake a thorough and continuous process of transformation; it must constantly alter its innermost structures by incorporating the particular nature of the obstacles it is reducing.’’ The birds are carcasses, a metaphor for lost innocence. Still, they’re sorted according to size; even in the face of chaos and destruction, it’s soothing to be able to classify, to philosophize, and to make sense of things.