Shadowy path to MFA and a glorious return 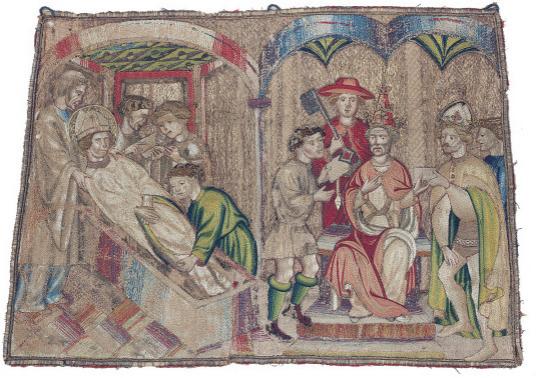 The embroidered panel is just 14-by-20 inches. But the director of the tiny Italian museum never forgot it. Just before World War II, he spotted it in a drawer of a church in Trent, a town in Northern Italy.

Then, mysteriously, it was gone, whisked overseas, sold by a New York gallery, and finally tucked away in storage here at the Museum of Fine Arts. It has not been seen by the public for at least two decades — until today.

That 620-year-old piece, “The Entombment of Saint Vigilius,’’ will get a hero’s homecoming in a museum in Trent. The MFA, after determining the work it had purchased back in 1946 for $3,000 had been stolen, quietly sent the piece back to Italy in October.

“It’s a beautiful textile, very fragile, and precious with silver and gold,’’ said Alessandra Galizzi, a professor of museum studies at the University of Trent, who helped broker the return. “It is especially meaningful to this city. It belongs here.’’

A show that includes “The Entombment,’’ which features an image crafted with colored silk, is set to open in a renovated castle that houses the Diocesan Museum of Trent or Museo Diocesano. There will be music and Italian cakes, local politicians and a display case finally complete. The centerpiece will be the returned panel and four others. Together, they are part of a set of at least six — the final one has not been found — dating back to 1390, depicting the story of the third bishop and patron saint of Trent.

So often in the museum world, restitution claims are met with skepticism and lengthy legal battles. In recent years, the MFA successfully fought off a claim by an Austrian woman who had demanded the museum give her a 1913 painting by Oskar Kokoschka that she contended had been sold under duress during World War II.

This case was different, MFA officials say. The museum was first contacted two years ago by Evelin Wetter, an art historian in Switzerland. She had known about the missing piece but had no idea where it was until she inherited the papers of an Austrian art historian. Inside, Wetter found a photograph of the embroidery and, on the back, saw the stamp of the MFA. Wetter contacted officials at the Boston museum and told them she suspected the work in their possession had been taken during World War II.

The MFA knew it had a panel, but just not that particular panel. The museum had even highlighted the work in a 2006 catalog of textiles. But in that catalog, the piece was simply listed as an “embroidered panel’’ possibly showing the Second Council of Lyons. It was not until Wetter reached out that the MFA realized the panel, in fact, represented St. Vigilius and came from Trent.

Torie Reed, the MFA’s curator of provenance, began to research the embroidery. She could not find an explanation as to how it had made its way from Italy to the New York dealership at which the MFA purchased it in 1946. But she did find a 1908 catalog entry from the museum in Trent showing the piece. She also found a 1996 catalog from the Italian museum referencing the missing, fifth piece. It became clear to her that the textile had to have been stolen sometime between 1939 and 1946.

But who took it?

“We don’t have a clue,’’ MFA director Malcolm Rogers said. “It’s a mystery.’’

The museum in Trent, which displays about 320 works of art spread over the 13 rooms of a medieval palace, was equally curious, and began to do its own research. Vice director Domenica Primerano, who handles day-to-day operations, talked with director Monsignor Iginio Rogger, who is now 92. He remembered, as a young theology student, seeing the piece in a church drawer. It had been placed there for safe keeping when the museum was closed out of concern for security during the war. When he reopened the museum in its current location in 1963, he realized the panel was no longer there.

“We were able to put together the pieces and realize the piece probably was stolen during the Second World War,’’ said Galizzi, the University of Trent professor.

Reed from the MFA would not speculate on how the work ended up in New York. For her, the satisfaction is in knowing the museum made the right decision.

“As a researcher,’’ she said, “you’re often looking for the answer to something and not finding it. What’s nice about this is that both the MFA and the museum in Trent seem very happy with the outcome.’’

Galizzi, who traveled to Boston in October to supervise the packing and transport of the embroidery, praised the MFA for searching for the true owner, even knowing it might mean giving up the work.

While the piece has been in storage at the MFA, it will be given considerable attention in Trent. The Museo Diocesano, in its invitation to today’s event, talked of a “gift that comes from afar . . . A few days before Christmas, the show Guided by a Star: The Long Journey of the Magi will host a gift of gold, silver . . . and silk, from the west!’’

The embroidery will be displayed for now as part of the special exhibit. The museum then will raise money to restore the panel, which is not in as good a condition as the four pieces already in the museum. Then, Galizzi said, it will go on permanent display.

Geoff Edgers can be reached at gedgers@mac.com