Eye of the storm

She conjures a ‘Tempest’ with a twist in her new film, but Julie Taymor is at the center of a very different maelstrom with her mega-budget Broadway musical, ‘Spider-Man’ 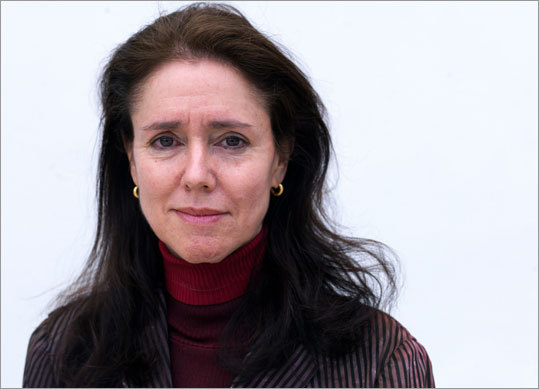 NEW YORK — The sorceress stands at the edge of a jagged cliff above roiling waters, lashed by rain as she commands the gale that howls around her. In the distance, a ship’s sails catch fire and its hull splits apart, this destruction the reason she conjured the storm into being. The damage done, she calms the disturbance in an instant.

The sorceress is Prospera, a female version of Shakespeare’s Prospero, and the scene is from director Julie Taymor’s new film “The Tempest,’’ starring Helen Mirren as the noble, exiled magic-maker who rules a nearly deserted island.

Off-screen, on the rather more populous island of Manhattan, Taymor has lately been at the center of her own storm, this one of the media variety. Maker of theatrical magic though she is, she cannot control the tempest that swirls around her: the breathless, Page 1 articles reporting the travails of her much-delayed, mega-budget Broadway musical, “Spider-Man: Turn Off the Dark’’; the snarky anonymous quotes about her in a New York magazine cover story; the “Saturday Night Live’’ spoof on the injuries sustained by some of her cast, featuring a Spidey who can do nothing but hang upside-down. If the cliché were true — if all publicity were good publicity — Taymor would be unruffled by the attention.

“I’ve never seen anything like the onslaught,’’ she said a few mornings after the musical’s first preview, sitting at the table in her airy, light-filled kitchen near Union Square, a cup of coffee she’d just brewed at hand.

A Newton native whose mother lives in Cambridge, Taymor catapulted to fame with her 1997 Broadway production of “The Lion King,’’ whose puppets, costumes, and masks bear her now instantly recognizable visual stamp. She won the Tony Award for best director of a musical, becoming the first woman to do so, and picked up another in the costume-design category. The show won best musical.

Promising eye-popping aerials of the sort never before seen on Broadway, “Spider-Man’’ has encountered an unusual amount of offstage drama in its eight-year odyssey to the stage: the death of its original producer; depleted finances; openings that were scheduled, then delayed; actors defecting along the way. This fall, during rehearsals, a performer broke both wrists doing a stunt, and suspense grew over whether safety officials would approve all of the flying. (They have.) When the show finally had its first preview Nov. 28, the triumph of getting it in front of an audience — even as technical problems persisted — was tarnished by news of the concussion an actress sustained backstage that night.

So technically demanding that major renovations to the Foxwoods Theatre were required, the show has an estimated $65 million to $70 million budget, a record that far eclipses any other Broadway musical. The expense, perhaps above all, has fascinated the media, though Taymor is baffled that anyone would care, since the financial risk is entirely her investors’.

Taymor, 57, has long experience in coping with media interest, and in toggling between theater, film, and opera. Evidence of her genre-crossing hung in the hallway outside her apartment — framed posters from projects she and her companion, composer Elliot Goldenthal, have done together over the decades: the “Beowulf’’ opera “Grendel,’’ the movies “Titus’’ and “Across the Universe,’’ and — this one just beside the door — the American Repertory Theater’s 1984 production of “The King Stag,’’ which Taymor designed and choreographed under Andrei Serban’s direction.

Even for Taymor, however, this is a high-pressure month. It includes not only intensive work on “Spider-Man,’’ slated to open at last on Broadway Jan. 11, featuring music by Bono and the Edge, but also the roll-out of “The Tempest,’’ opening Friday in Boston, and her production of Mozart’s “The Magic Flute,’’ returning to the Metropolitan Opera Dec. 21.

It is no wonder, then, that she looked a bit weary as she spoke, yet her home was an oasis of quiet and calm, made cheery by the presence of her ebullient little dog, Luna, a 2-year-old Havanese in whose black-and-white face Taymor sees, naturally, a mask.

A new take on ‘Tempest’ Foremost on Taymor’s mind that morning, at least for the moment, was “The Tempest,’’ which marks her return to the first Shakespeare play she ever directed, in 1986. Back then, her Prospero was a man, her Ariel a puppet mask trailing a diaphanous silk tail across a stage covered in black sand. But while some scenes she did with puppets then she does with computer-generated imagery now, other tableaux are nearly the same in both play and film.

The opening shot of the movie, a close-up of a black sand castle dissolving in the rain, echoes the set she had wanted to have for that stage production: “a giant sand castle that would disintegrate slowly throughout the performance,’’ she wrote later. When her set designer thought that was too much to demand of the stagehands, Taymor conceded the point. But, as her ambitions for “Spider-Man’’ suggest, she prefers to push the boundaries of possibility.

“I don’t do things to be safe,’’ she said, meaning safety not of the are-your-stunts-too-perilous variety but of the artistic-risk variety. “I kind of want to be thrilled. I want to go into something having an idea of where I want to go, but I also want to be surprised by it and be taken to another plane. I want to go where I haven’t trod before.’’

On those adventures, she’s often accompanied by colleagues she’s worked with in the past — such as Bono, who had a small role in “Across the Universe,’’ and her “Spider-Man’’ set designer, George Tsypin, who designed the “Magic Flute’’ sets. Glen Berger, who wrote the “Spider-Man’’ book with Taymor, also contributed some crucial verse to the “Tempest’’ script.

Speaking by phone from Los Angeles, Molina recalled singing Broadway show tunes with her between shots on both films, “even when we were doing scenes that were like really serious or painful or emotionally tense or wrought.’’

“I remember thinking at the time, (A) it created a wonderful atmosphere and a wonderful energy,’’ he said, “but at the same time I think it showed just how interested she is in so many things.’’

As an interpreter of Shakespeare, Molina noted, Taymor “has a way of kind of shrugging off’’ preconceived notions about the material. Changing Prospero to Prospera, which he called “a stroke of genius,’’ liberated the character from its usual constraints, he said.

“Prospero is almost always played like an old, bearded, sort of grand, grave old man: someone who’s, in a sense, at the end of his life. And all the action in the play is about a kind of reconciling oneself to the inevitable end and seeking some kind of redemption and, you know, tying up loose ends before you pop your clogs,’’ he said. But in Taymor’s telling of the tale, with Mirren at its center, “instead of ‘Oh, it’s another old wizard,’ suddenly it’s this kind of rather gorgeous woman who’s calling the shots. It just gives it a whole new perspective.’’

With her long, dark hair, dark eyes, and flawless features, Taymor is another rather gorgeous woman calling the shots, and she bristles at the suggestion some writers have made that her “Tempest’’ is a feminist revision. Her script tweaks Shakespeare with a bit of back story about the widowed Prospera’s study of the magic arts years before in Milan; Prospera’s brother steals her dukedom by accusing her of witchcraft.

“It works with a woman in the role, period,’’ Taymor said, adding that most Shakespeare plays couldn’t so easily be tinkered with, but a sorceress made sense. “Women were burned at the stake for this.’’

Dramatic impulses Taymor has been studying her own art since childhood. The summer she was 8, she played Hermia in “A Midsummer Night’s Dream’’ at Camp Walt Whitman in New Hampshire. At home, she delved into drama with the Boston Children’s Theatre and as a teenager joined Theater Workshop Boston, where she was part of its long-running 1968 production, “Tribe,’’ a participatory political play aimed at teaching children about Native American culture.

Even then, said Saphira Barbara Linden, who directed and co-wrote the play, Taymor trusted her own dramatic impulses.

After graduating from Oberlin College, Taymor headed to Indonesia to study theater and puppetry, intending to remain three months but staying four years and founding a theater company. “I always thought of Indonesia as my trial by fire,’’ she said, because of what she experienced there: not just the challenges of creating her first real work but things like “tidal waves and volcanic eruptions,’’ as well as a horrific bus and truck accident that happened on the way to her company’s first performance after a year of rehearsals.

“It was so extraordinary and so life-changing that it kind of sets the bar of, ‘OK, what’s really difficult?’ You know?’’ she laughed. “And anything else that I’ve done, it always has to compare to what it was to be alone, basically, with a company of Indonesians and one Frenchman, one German, and myself, creating new, original work in Indonesia — without any press. There was no spotlight or anything, which is so different from what it is like now.’’

Back in the United States, she showed her notebooks to Robert Brustein, who had recently founded the ART. He became convinced that this young woman was the right person to team with Serban for “The King Stag.’’ Following her career now, he is unsurprised by the media storm raging around her and her “Spider-Man.’’

“Whom the media would destroy, they first make famous, and a huge budget makes journalists want to see a comeuppance,’’ Brustein said. “I’m not saying that’s true of everyone, but there’s something undeniably excessive about the size of this show, which is more expensive than anything yet seen in New York.’’

He suspects additional factors, too: envy brought on by Taymor’s fame and hubris brought on by her own success. “Maybe Julie is suffering from some of that right now — but she has also courageously embarked on a very dangerous project, a very technical project,’’ the complexity of which, he noted, is both the cause of the enormous budget and the reason the show seems to be getting out of her control.

Taymor cited another source of the production’s technical troubles: Bringing “Spider-Man’’ to Broadway without an out-of-town run meant that the usual process — including not just technical rehearsals but time to fix problems found in those pre-Broadway performances, as she did with “The Lion King’’ — was truncated. The rehearsal period was “supposed to be equivalent,’’ she said, “but this is shorter because we didn’t go out of town.’’

To shoot “The Tempest,’’ Taymor went way out of town, to the Hawaiian Islands. But it’s of that other volcanic archipelago, Indonesia, that she thinks when she goes through struggles. Like now, for instance.