Fleeting moments in sands of time 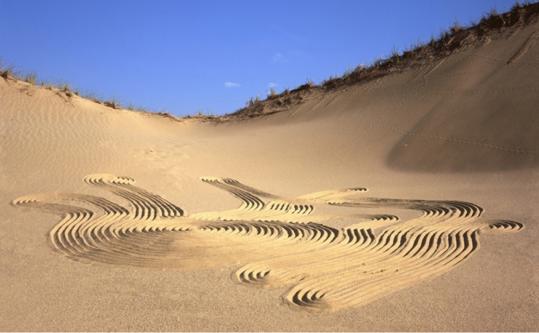 PROVINCETOWN — “The white breakers were rushing to the shore; the foam ran up the sand, and then ran back as far as we could see,’’ wrote Henry David Thoreau in “Cape Cod.’’ “And ever and anon a higher wave caused us hastily to deviate from our path, and we looked back on our tracks filled with water and foam.’’

Thoreau walked the beach in Wellfleet. Artist Daniel Ranalli spends several months each year on the same sands, leaving marks that are washed away by tides and wind. “Traces: Daniel Ranalli, Cape Work 1987-2007,’’ an exhibit of great heart and grace organized by independent curator Leslie K. Brown at the Provincetown Art Association and Museum, spotlights Ranalli’s work on and about the beach.

Ranalli is an environmental artist in the tradition of Robert Smithson and Richard Long, the British artist known for walking works. Brown rightly calls Ranalli a conceptual artist; much of his art is made to vanish, and so it seems more idea than object (although his photographic records are part and parcel with the art). But something in the label “conceptual art’’ implies intellectual gamesmanship, and there’s not a trace of that here. Indeed, this exhibit is a love letter to the seashore.

Love is never easy, though. It’s rife with change and loss. The exhibit begins with the black-and-white photographic triptych “Every Mark I Make . . .,’’ documenting the fate of two columns of clam shells Ranalli laid at the water’s edge. In the first image, they glow in the damp sand. In the last, they have nearly vanished beneath the tide. The artist has written in pencil below the images: “Every mark I make . . . seems to fade away.’’

These works record the artist’s search for patterns and the marks he steadfastly leaves behind, despite the knowledge that time and tide vanquish all. Yet he persists; every trace, every pattern, represents Ranalli’s effort to grasp the unknowable, to gain a foothold while leaning into the relentless headwind that is nature’s mystery.

“Seven Daily Stones’’ features seven spare, square photos of sea-smoothed rocks, each with a notch in it. “I thought if I could find a stone with a hole in it each day on my walk for seven days — that would be significant,’’ reads the text below the photos. The mere statement of his quest somehow attests to its ultimate insignificance.

Some call environmental art “interventions.’’ Ranalli doesn’t intervene in nature; he collaborates with it. The work seems less about art — that is, about something made to show to others — than it is an intimate document of his own contemplative relationship with the beach and its flora and fauna. I’m sure it’s not just luck that it is art; the work is smart and profoundly moving. But that seems a side benefit.

Looking at pieces such as “Squid Returning,’’ a triptych documenting the sea’s consumption of a giant squid sculpture he’d made of seaweed on the shoreline, I thought of the makers of Stonehenge. We don’t know why, exactly, they built it. We do know they left their mark, one that honors and ritualizes the passage of the seasons.

Near “Squid Returning’’ hang images of a much smaller work: “Spiral Start #9.’’ The artist arrayed more than 50 snails in a perfect spiral and photographed them. Some time later, he shot the same snails, crawling away in every direction, leaving lines in the sand. All evidence of the spiral, that elegant echo of the snail’s shell, a form so perfect it is an artist’s dream, is gone.

Meaning is fleeting. That’s a Zen stance, which Ranalli applies even more specifically in his gorgeous “Zen Dunes’’ series of color photographs, the most recent work in the show. Like a Zen gardener, he took a rake to the sand and drew patterns. In “Thalassa #3’’ (the title names a Greek goddess of the sea), he raked concentric circles around tufts of grass; it’s as if the grass is the splatter of a stone dropped in a still pool, and the raked patterns the ripples that follow.

“Zen Dune #17’’ features rakings in a bowl between dunes, the sun slicing the undulating patterns into stripes of gold sand and black shadow. The sand surrounding the rake drawing appears pristine, but look closely and you’ll see more delicate lines in the shadow of the dune on the right, perhaps the footprints of a small critter.

All the marks disappeared soon enough, no doubt. In the end, Ranalli reckons with mortality. His “Whale Homage’’ was made after six whales beached themselves nearby: He made a whale skeleton from seaweed, and watched it wash away in six hours.

Whales often lose their lives on the shoals of the Cape. Before whaling was illegal, whales were driven into the shallows and massacred. The most harrowing series is not photos, but woodblock prints. It takes off on whaling ships’ practice of keeping records, Ranalli says in wall text, using hand-carved wood blocks shaped like whales to make tallies of the catch. The print “1405 Whales’’ swarms with tiny whales in blue, black, and brown. Breaths of red suggest blood. The piece is a memorial, a testament to the day in 1874 when just that many whales were driven ashore off Truro. The breadth of the carnage is heartbreaking.

Their carcasses are long gone from the shores of the Outer Cape, of course. But for the moment, Ranalli is still there, leaving traces.

Cate McQuaid can be reached at cmcq@speakeasy.net