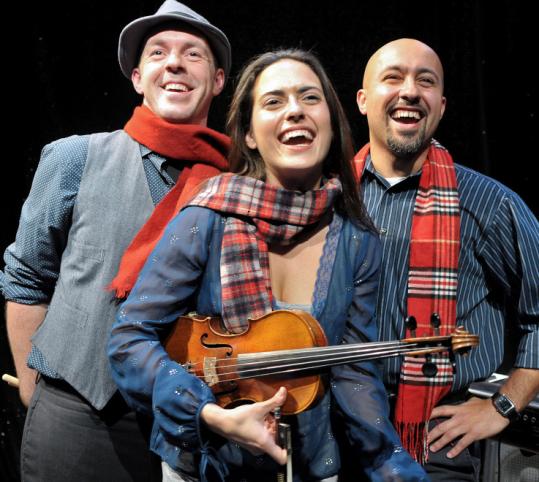 There’s a grumpy guy who doesn’t want his spirits raised, an urchin freezing to death on the city streets, and a trio of musicians with mixed feelings about telling those tales in song. But “Striking 12’’ is not your average holiday show, and not just because the holiday it tackles is New Year’s Eve.

“It was described to me as a very atypical, uncommon, unexpected, but wholly entertaining and engaging event. And I said, that’s very nice, but what does that mean?’’ says José Delgado, a performer and the music director for this pop-rock musical, which runs Wednesday through Jan. 2 in Deane Hall at the Stanford Calderwood Pavilion, Boston Center for the Arts, presented by SpeakEasy Stage Company.

In “Striking 12,’’ three performers play more than two dozen characters, mostly without letting go of their instruments. The main story is about a present-day Grumpy Guy avoiding New Year’s cheer when he’s visited by a chipper young woman selling full-spectrum light bulbs to battle seasonal affective disorder. When he compares her to “The Little Match Girl,’’ it leads to a retelling of Hans Christian Andersen’s sad fable. And the performers break the fourth wall to comment on holiday show-biz throughout.

“It’s the first one I’d want to be part of,’’ Delgado says, “not that there’s anything wrong with any ‘Christmas Carol’ or any more traditional story . . . but for me personally it was engaging in that it wasn’t sugary sweet, it wasn’t stereotypically ‘All is gonna be well and end well.’ It’s got a few different twists.’’

The book, music, and lyrics are by Brendan Milburn and Valerie Vigoda of the band GrooveLily and Rachel Sheinkin (“The 25th Annual Putnam County Spelling Bee’’). Milburn and Vigoda debuted it with the band’s drummer, Gene Lewin, in California in 2004.

Delgado was especially glad to take part in “Striking 12’’ because it’s a show that depends on live musicians. Like many colleagues, he’s been watching as the Boston chapter of the American Federation of Musicians protests the use of pre-recorded music for the “Radio City Christmas Spectacular’’ at the Citi Wang Theatre.

“It’s killing me to hear that more and more, live musicians and live music in general are being reduced and cut and marginalized for the sake of the bottom line,’’ says Delgado. “The work my colleagues and I try to do, even with reduced budget and reduced numbers and reduced everything, is to bring out the maximum entertainment value for the dollar, so when people put down their $50-$60 or even $130-$140 and come to see a show, they’re not going to get the CD they can buy for $15 at the store.

“One of the best parts about live performance, live theater, live anything is that it’s organic in the moment,’’ he adds. “It’s the musicians making it, interacting with the audience, taking it all in and figuring out what it’s going to be for that night.’’

SpeakEasy bumped up the stakes for “Striking 12’’ by handing the show to a first-time director, 22-year-old Scott Sinclair, a 2010 Emerson College graduate now working at the company as a marketing associate. Sinclair was a SpeakEasy intern during his final two years at Emerson and served as assistant to producing artistic director Paul Daigneault on productions of “Jerry Springer: The Opera’’ and “[title of show].’’

“He’s incredibly capable and really insightful about theater,’’ says Daigneault. “It’s part of my mission to give early career people . . . a chance when I can, just because that was one of the frustrating things when I was a young artist, nobody would give me a chance.’’

Daigneault’s own busy directing schedule was also a factor, and he says having a veteran such as Delgado in the cast and as music director made it easier to hand the show to a first-time director. The concert format makes “Striking 12’’ a good first venture, too, he says. “I feel like we set it up for Scott to be really successful, and the show is fabulous,’’ Daigneault says. “Honestly, it has such an optimistic, youthful, young, hip kind of feel to the show that Scott taps into it much more than I do.’’

“I am in eternal gratitude to Paul for taking such a risk,’’ says Sinclair, who adds that musicals are what got him into the business.

“I still don’t really believe it’s happening,’’ he added. “Luckily my name is on the poster and the website, things that would take a lot of money to change.’’