Getting back to the garden 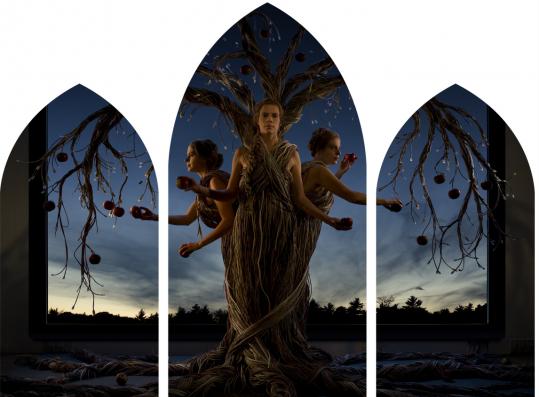 The apple is an age-old reference to the biblical tree of knowledge. It’s also the logo for a powerhouse computer and consumer electronics company, and there are scores of other associations with the fruit. Triiibe — the collective composed of identical triplet performance artists Alicia, Kelly, and Sara Casilio and photographer Cary Wolinsky — has a witty, luscious exhibit, “In Search of Eden: A Work in Progress,’’ at Boston University’s 808 Gallery with apples as its driving metaphor.

The show comes in two parts. First, several photographic triptychs have been set up behind opened black curtains in the gallery’s generous windows. They are trademark Triiibe images: The Casilios appear in richly designed narratives as different characters with identical faces, a conceit that tickles and prods our perceptions and beliefs about personal identity.

In this case, the triptychs are set up as altarpieces. With their bright tones and peaked frames, they make the gallery’s windows look almost like stained glass. Each piece is titled with the name of an apple. “McIntosh’’ marries the tree of knowledge motif with the digital age reference: The women, wrapped in computer cables, form an apple tree. Most of the pieces here hold a tension between the dream of a utopia and its disappointing achievement — such as ensnaring people in the very wires they use to connect with each other.

“Royal Gala’’ reprises van Gogh’s “The Potato Eaters,’’ with the Casilios in rough work clothes gathered around a table, eating fries out of fast food containers. Some of these works stretch the apple motif too thin, but the images are so dramatic and weird, and often rife with other references, it doesn’t matter.

I visited the gallery on a day when the second component was not up and running: Triiibe is attempting to create a public living room. The floor is scattered with low wooden tables and places to sit. Visitors can lounge, chat, and munch on apples as the triplets paint the interior of a room constructed within the gallery. Ultimately, through painterly optical illusion, the squarish room will look like a dome from within. The trompe l’oeil project seems disconnected thematically from the exhibit, just a project to entertain the artists while they entertain visitors. But the living room is in keeping with the spirit of community with which the Casilios and Wolinsky foster their collective. That can be seen as their own search for Eden — still, indeed, a work in progress.

Form and patina Judy Kensley McKie is one of the foremost studio furniture-makers in New England. Her latest exhibit at Gallery NAGA is a knockout, a trove of styles, materials, dancing patterns, and long, vital, sinuous lines.

Many pieces are instantly recognizable as hers yet still surprise with their power and rhythm. Look at “Round Hound Table,’’ a glass-topped circular coffee table held up by two elongated bronze dogs. They grab each other by the tail, ears flying, perfectly symmetrical and unabashedly canine. McKie often abstracts animals to fill roles in both function and design, lending an element of humor and accessibility to the work.

“Abstract Headboard’’ takes McKie on a new tack: She has carved out of pale basswood an animated pattern of linked forms. Together, they might constitute a glimpse into a jungle, with hints at birds and vines and climbing critters. But this is pure abstraction, rollicking and expressive in line and rhythm.

The artist is a master of form and patina. Her “Duck Bowl,’’ an oblong vessel with a long, slender neck and an impertinent tilt to its backward-turned beak, is cast bronze, but it looks more like a pale, yellowish stone.

There’s plenty more to see: a snarling, lean, bronze “Tiger Table’’; a “Ram Bench’’ in limestone that is both docile and fierce; and “Pyramid Chest,’’ in a jazzy, carved and painted diamond pattern. The works’ range is broad. What holds it together is McKie’s aesthetic, grounded and alive, like electricity.

Color sense “Mosaic painting,’’ is a broad term, suggesting a painting made up of increments of color. Almost any painting could fit that description. But in the case of “John Grillo: The Mosaic Paintings,’’ a dozen works from the 1950s by the abstract expressionist at ACME Fine Art, there’s a clear motif: Grillo built up each canvas over a grid with staccato brushstrokes in a limited number of hues. He studied with Hans Hofmann, and it shows: His color sense is hot and emotive.

In “Untitled Mosaic (09-01),’’ the interplay of orange and yellow, with occasional sturdy passages of black and surprises of aqua blue, brought to mind the rhythm and cadence of a songbird. “Untitled Mosaic (10-14)’’ sports playful circular patches; it could depict a boxful of balls in oranges, blues, whites, and purples, layered to convey volume.

ACME supplements the Grillo show by spotlighting other mosaic painters: Grillo’s contemporaries, who also studied with Hofmann, such as Selina Trieff, whose untitled mosaic borders on architectural, and artists working in the style today, such as Sklan, whose “Hermetique,’’ a gorgeous patchwork of mostly blues, seems to expand outward.