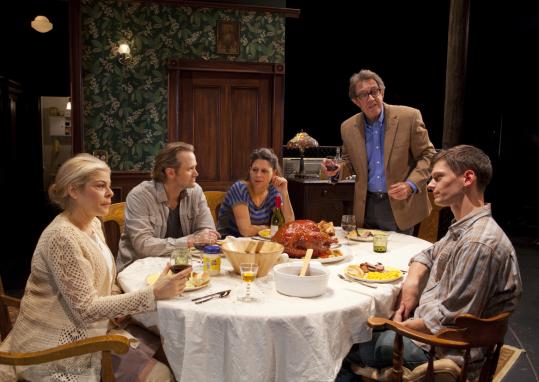 In the wrong hands, “Vengeance is the Lord’s’’ could be pious or pulpy or both.

The fact that the Huntington Theatre Company’s production of “Vengeance’’ is neither of those things, but is instead a taut, morally complex, and utterly absorbing drama, is a testament to the refusal by playwright Bob Glaudini to settle for any easy answers when it comes to questions of right and wrong and what constitutes justice.

Glaudini has a knack for profane, tough-guy dialogue laced with mordant humor, but what really makes “Vengeance’’ special is the playwright’s understanding of the tangled wiring of human nature, his realization that the need to avenge and the need to forgive can coexist in the same family, and even, sometimes, in the same person.

Under the skilled direction of Peter DuBois, “Vengeance’’ manages to explore the tensions between those dueling impulses during a series of holiday family gatherings without shortchanging or patronizing either side of the equation. I won’t reveal which of the two impulses eventually wins out in “Vengeance,’’ but they are projected with roughly equal force by Larry Pine as Mathew (yes, it’s spelled with one “t’’) Horvath, and by Roberta Wallach as his ex-wife, Margaret.

As “Vengeance’’ gets underway, Mathew and Margaret are gathered for Thanksgiving dinner with their three adult children: tough, implacable Woodrow (Lee Tergesen); jittery Roanne (Katie Kreisler), who is vainly trying to stop smoking; and the youngest and gentlest, 22-year-old Donald (Karl Baker Olson). Both literally and figuratively, Donald is as Woodrow describes him: “a vegetarian in a house of carnivores.’’

There was a fourth child, Cheryl, who was 20 when she was murdered a decade ago. Now, her killer is on the verge of a parole hearing and, to Mathew’s disbelief, Margaret wants to meet with him before the hearing. “I need to look in his eyes,’’ she tells Mathew, so “if when he asks forgiveness, I can see he’s changed.’’ If she does see a change, Margaret will not oppose his release from prison.

What makes this intriguing is that Margaret is such a hard-bitten, tough-as-nails character. Her need to consider forgiveness for the prisoner stems from a desire to escape her own internal prison; she even thinks her hip problems are exacerbated by her “festering anger and hate toward another.’’

The Horvaths are far from the typical victim’s family, given that they engage in a variety of criminal enterprises (such as a car-theft ring) themselves. Though they operate at a much lower level of criminality than the Sopranos, they share with the members of that New Jersey clan a contradictory bundle of character traits: They are loving and brutal, sentimental and ruthless. It’s clear, for example, that should his daughter’s killer be set free, Mathew Horvath has certain extra-judicial remedies available to him.

The picture is further complicated when the Horvaths’ web of illicit activities leads to tragedy for another family. Suddenly, another parent (powerfully portrayed by Johnny Lee Davenport) is grieving the loss of a child, and Donald is arguing on behalf of “standing up for the truth,’’ while the other Horvaths are forced to confront the question of how far, exactly, they are willing to go to protect their interests.

As Mathew Horvath, Pine creates a shaded portrait of a patriarch whose jaunty, dapper, even magisterial demeanor can give way, suddenly but believably, to a vein-popping fury. To play Margaret, a woman struggling with both physical and psychological pain, Wallach sets her features in a scowling, nearly immobile mask, which makes it all the more riveting when grief conquers her during one explosive scene and the mask falls away.

Tergesen, who played Tobias Beecher on HBO’s “Oz,’’ is compulsively watchable as Woodrow, suggesting a human volcano unable to remain dormant for long. As Roanne, Kreisler has the least developed role, but she hints that this 32-year-old woman is both tied to her volatile family and looking for ways to escape it, as when Roanne embarks on an affair with a married cop.

Olson brings both poignancy and force to the role of Donald, suggesting that the pressure of trying to live up to Cheryl’s unrealized potential has taken a toll on him. Though smart, he has yet to obtain his high school degree, has not launched a career, and is unable to form relationships. “There’s something I see in everything I’m supposed to want that doesn’t let me,’’ he says to his father.

It is in keeping with the challenges presented by the unflinching and rewarding “Vengeance’’ that the one Horvath who is determined to do right may be the one most damaged by the wrongs done to, and by, his family.

VENGEANCE IS THE LORD’S