A new take on Tarkington 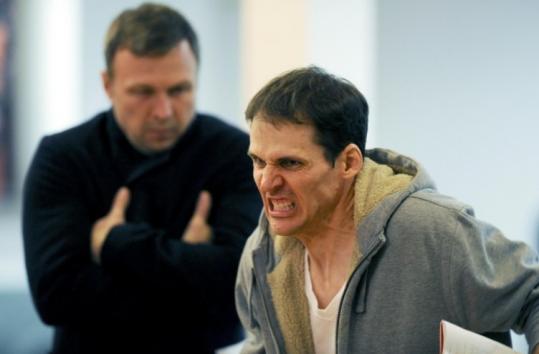 At rehearsal, Tony Ward (left) plays a reporter and Joey Collins is a politician in “Beasley’s Christmas Party.’’ (Mark Wilson for The Boston Globe)
By Joel Brown Globe Correspondent / November 21, 2010

Carl Forsman wanted to create an original Christmas show for his New York theater troupe, Keen Company, which specializes in “sincere plays.’’ He looked for four years for just the right story to adapt, until one day in 2006 when he and a girlfriend happened to visit a used-book store in Sarasota, Fla.

“I rounded the corner in the bookstore, and she was sitting on the floor with a little tiny book in her hands, and she handed it to me and said, ‘Here’s your Christmas play,’ ’’ Forsman says. “And she was dead right.’’

The book was a Booth Tarkington novella called “Beasley’s Christmas Party,’’ published in 1909. “I read it that night,’’ Forsman said. “It was like he’d written it for me.’’

Forsman’s friend C.W. Munger adapted the book for a Keen production that ran off-Broadway in 2008. Joey Collins and Tony Ward starred under Forsman’s direction, and now all three return for the show’s run at the Merrimack Repertory Theatre, Friday through Dec. 19. (Forsman directed “Heroes’’ at Merrimack Rep last season with the same design team.) Crystal Finn completes the cast, and she and Collins play multiple roles — without costume or makeup changes.

The play is narrated by a young newspaper reporter named Booth (Ward), who becomes curious about the eccentricities of Beasley (Collins), the congressman who lives next door. Beasley seems to have an unusually vivid imagination, which would be of interest to those who hope to block his run for governor. But of course there’s an explanation, and a heartwarming one at that.

“This play has that feeling, it’s like coming inside from the cold to a warm fireplace with friends and family that you love,’’ Collins said. “As soon as you walk into that warmth, a wonderful joke is told, and everyone’s laughing, with red faces and a cup of cocoa in their hands. This plays offers that to us. There’s this, like, joy.’’

Because it’s such a family-friendly piece, Collins said, his 4-year-old daughter will be able to see him act for the first time.

Forsman and the two actors say Tarkington was known to them, if at all, for his novel that became an Orson Welles film. As Ward said, “All I think I knew was that he’d written ‘The Magnificent Ambersons,’ which I knew from Sunday afternoons staying inside because it’s raining, and TCM has it on.’’

But all three said they had been reading Tarkington since starting work on “Beasley,’’ and were particularly impressed by “Alice Adams,’’ a novel that, like “The Magnificent Ambersons,’’ won the Pulitzer Prize.

“It’s not cool to say you like Booth Tarkington as a writer, but when you read him, you can have a real appreciation for his dexterity with the nuances of language,’’ Ward said.

That language also challenges Ward, who speaks many of Tarkington’s flowing, elaborate sentences. “I remember during rehearsal I felt slightly oppressed by the number of words I had to memorize,’’ Ward said, adding that it’s easier this time. “I was joking to Carl that revisiting this a second time is like having a few drinks and a ’70s song comes on and you find you know all the words again. It’s been really pleasant.’’

There’s also contemporary resonance in a character played by Collins, a political operative eager to torpedo Beasley’s candidacy. “It is true that the things Simeon Peck accuses Beasley of would come out of the mouth of an ardent Tea Party type,’’ Ward said. “He’s carrying a grudge. Peck is a resentful guy who wants to bring down a pretty good man in public office. That seems to be a pretty timeless thing.’’