Silent and hidden, in the open

Mark Bradford uses many forms to represent his case 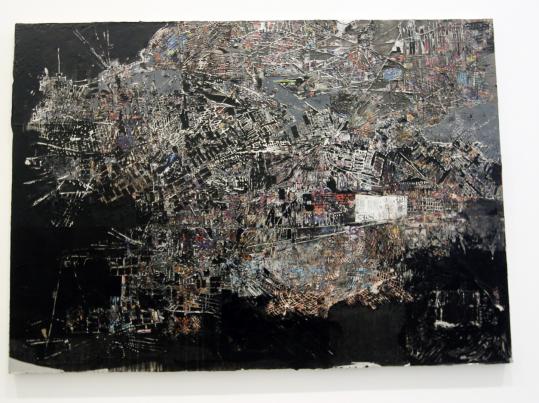 Mark Bradford’s “A Truly Rich Man Is One Whose Children Run Into His Arms Even When His Hands Are Empty.’’ (Joanne Rathe/Globe Staff)
By Sebastian Smee Globe Staff / November 19, 2010

Imposing and even quite grand at a distance, Mark Bradford’s paintings, like the sprawling cities they evoke, suggest ruins up close.

They are ruins — the ruins of other modes of communication, other forms of speech. One over the other, Bradford layers old billboard signs, maps, and street posters. They’re salvaged, shredded, stripped, glued on, and rubbed back.

Working intuitively, he converts all these materials and more into works of art that are dense with history, freighted not only with political and social readings but with an abiding, poignant silence.

It’s the silence that gets under your skin. To wander around Bradford’s superb survey show at the Institute of Contemporary Art is to oscillate between the desire to get up close and even to touch (the impulse to run your fingers over their corrugated surfaces is almost impossible to resist) and a growing sense that you are in fact looking on from unreadable distances, like a general watching a chaotic battle from the top of a distant knoll, or an uncomprehending politician flying high over a disaster zone.

Although his work is ostensibly abstract, this is an artist who also has politics on his mind. One room in the ICA show, which was organized by the Wexner Center for the Arts at The Ohio State University, displays a series of works that constitute Bradford’s response to the aftermath of Hurricane Katrina.

They’re impressive. Look out, in particular, for a massive mixed media work called “A Truly Rich Man Is One Whose Children Run Into His Arms Even When His Hands Are Empty’’ and a vast grid of weather-beaten signs announcing propane deliveries to FEMA trailers. It’s called “Corner of Desire and Piety.’’ The same room contains footage of the construction of a large wooden ark plastered with tattered bill posters that Bradford made for Prospect New Orleans, a biennial of contemporary art organized in Katrina’s wake.

Bradford, 48, is African-American and gay. He came of age in the 1980s. He told Helen Molesworth, senior curator at the ICA, that the three biggest factors in his formation as an artist were the birth of hip-hop, the AIDS crisis, and the late 20th-century phenomenon of “identity politics.’’

How on earth, you may wonder, given all this, did he end up forging a brilliant career as an abstract artist?

On the face of it, the decision looks gloriously perverse. The ’80s seemed to sound a death knell for abstraction. Few artists were interested in it. Its possibilities seemed played out. People were hungry for content, for representation (in all its senses), for the righteousness and punch of politics.

Bradford was part of this. How, with his background, could he not be?

But identity politics can be cruelly deterministic — not to mention hostile to the uncensored movements of the mind, to art. As he began making major work in the early 2000s, a big part of Bradford sought to shake off the expectation that, as an artist, he would hit all the predictable notes.

Hence, perhaps, his attraction to abstraction.

Despite its utopian beginnings in Western Europe and the Soviet Union, abstraction in the United States has tended not to mix with politics. Even abstract artists with a strong political bent have kept art and politics determinedly apart: Ad Reinhardt, for instance, was politically active as a citizen, but there’s not a trace of politics in his monochrome paintings.

Hoping to avoid this kind of bifurcation, Bradford found a precedent in a group of postwar European artists called the “Nouveau Réalistes.’’ Jacques de la Villeglé, Raymond Hains, and François Dufrêne, from France, along with the Italian Mimo Rotella and the German Wolf Vostell, all sought to bring the hubbub of the street into their art by making works from torn advertising posters.

They described their technique as “décollage.’’ Where collage depended on using fragments to create a new and recognizable unity, the decollagistes were more intent on destroying the legibility of preexisting images by tearing them up, layering them one over the other.

There was sometimes, though not always, a political dimension to their work. Hains, for instance, made a work called “Paix en Algerie’’ (Peace in Algeria) in which those words, reconstituted from salvaged graffiti, were clearly visible.

The revolutionary group known as the Situationists, led by Guy Debord, celebrated décollage as a method of political subversion: “Ultimately, any sign or word is susceptible to being converted into something else, even its opposite,’’ wrote Debord and his colleague Gil J. Wolman.

All this chimed with Bradford’s approach — although his work looks very different. The Nouveau Réalistes’ use of movie posters and ads for commercial products spoke to an economy of desire and capitalist exchange.

Bradford, who scours his Leimert Park neighborhood in Los Angeles for materials, is more likely to use posters that tell a different and more desperate story: “IS THIS CHILD YOURS?’’ we read in one untitled work: “DNA TESTING (COURT CERTIFIED). YOU HAVE A RIGHT TO KNOW.’’ Or “JAMES BROWN IS DEAD.’’ Or simply “GUN SHOW.’’

Bradford, in the end, strikes me as a more transformative artist, and a more flexible one, than his European predecessors. Working rapidly and throwing in whatever comes to mind, he gets more from his materials, taking his work further from its original sources.

The show is organized chronologically, which is interesting because the early works, made only 10 years ago, are not exactly auspicious. They’re large abstractions with cryptic, oddly loaded titles: “Exit and Enter the New Negro,’’ for instance. Or “But You Better Not Get Old.’’

Although they appear painterly (layered shapes, textured surfaces, subtle modulations in color), they are not actually made with paint. Instead, using a kind of glue or gel, Bradford pasted permanent-wave end papers — square papers used in hair salons to straighten hair, particularly afros — onto canvas. (The papers came from Bradford’s mother’s hair salon, which is now his studio.)

The shifts in tone and transparency in these early works are diverting, but the overall effect woozy and diffuse. They have none of the chewy materiality or density of connotation that begins to appear in scattered works in the third and fourth rooms.

One of these, “The Some of Its Parts,’’ combines permanent-wave end papers with bill posters and other materials to set up an extraordinary composition of radiating lines and pixel-like bursts of fluorescent color against a field of horizontal white strips. Seeing it, you can’t doubt that whoever made it is onto something.

Further into the show, we see examples of Bradford’s occasional dalliances with installation, sculpture, and video. There is one beautifully orchestrated sequence that takes us from an installation made earlier this year to a sculpture, then a large-scale painting, and finally a video.

All four works touch on the subject of black masculinity, and on the courage, vulnerability, and pathos that may adhere to being gay and black in contemporary Los Angeles.

The installation, called “Pinocchio Is on Fire,’’ is a dark corridor lined with a grid of black squares with speakers emitting a soulful soundtrack (Nancy Wilson singing “Tell Me the Truth’’). It’s Bradford’s haunting, if obscure, response to an equally obscure incident from the early ’80s: the discovery of black singer Teddy Pendergrass’s dalliance with a transsexual after the two were involved in a car crash.

We move on to the sculpture, a basketball covered in twine and black papier-mâché called “Kobe I Got Your Back,’’ and then the painting, a huge work called “Black Venus’’ which evokes an aerial photograph of a sprawling city — possibly Los Angeles. Finally, there’s a video of a black man, seen from behind, walking with a conspicuously gay gait down an LA street.

The footage of the walking man is played in slow motion, so that, both rhythmically and emotionally, it dovetails with the slow and lyrical Wilson song (“Do you plan to forget me?’’) in the background.

In works like these, and in their titles, Bradford layers allusions and meanings in the same way he layers materials. You don’t have to “get them.’’ Indeed, part of his work’s poignant effect is that even as meanings accrue, they continually slip out of reach. Signs that began their existence as models of lucidity and legibility end up being erased, ripped, obscured, or papered over, just as new bill posters are plastered over old ones, and just as (one could say) hurricanes and epidemics have the potential to erase whole communities.

Bradford’s career looks like an ongoing tussle between the impulse to answer the call of identity politics — to express and draw attention to political and personal injustices — and to reject that call. His works, at their best, transcend it. They are like palimpsests, quietly radiating meanings, emotions, and no end of visual satisfactions. But they are also poignantly self-contained, and even mute. They are powerful exemplars of a strain of contemporary art (one thinks of Christo and Jeanne-Claude’s wrapped buildings and Piero Manzoni’s so-called “Achromes’’ made from creased white canvases) that is as much about concealment as communication.