Paintings were taken from Stockbridge home 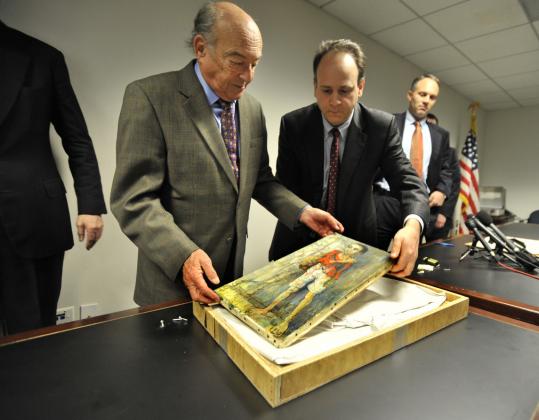 Michael Bakwin (left), and Assistant US Attorney Jack Pirozzolo, at a news conference in Boston yesterday, unpacked one of the Jean Jansem works that was stolen from Bakwin’s home in 1978. (Josh Reynolds for The Boston Globe)
By Jonathan Saltzman Globe Staff / November 18, 2010

Michael Bakwin and his wife left their Stockbridge house on Memorial Day weekend in 1978 for a short trip. Soon after they returned, they discovered that someone had broken in and stolen seven paintings together worth millions, including a major still life by Cezanne. It was the costliest burglary from a private residence in Massachusetts history.

Yesterday, after a saga that spanned two continents, featured characters ranging from a Pittsfield thief to a British sleuth of stolen art, and culminated in the 2008 conviction of a Watertown lawyer-turned-artist, the last two of the missing paintings were returned to Bakwin.

Federal prosecutors turned over two small works by the French artist Jean Jansem to Bakwin at the US attorney’s office in Boston. Bakwin, who bought the two paintings in Paris in the late 1950s, said he had not seen them since they disappeared 32 years ago and was grateful to get them back, even though they were the least valuable of the lot. Together, the two are worth no more than $10,000.

“My hobby was collecting art,’’ the 76-year-old man said with a catch in his voice. “When they’re taken away from you, you feel like something has left your life. It’s a big hole.’’

The two Jansems, titled “Woman Seated’’ and “Boy,’’ have been in the custody of the FBI since Robert M. Mardirosian, a retired criminal defense lawyer, was convicted in federal court in Boston in August 2008 of possessing six of the stolen paintings. Mardirosian, who is also 76 and had stopped practicing law to become a painter and sculptor, is serving a seven-year prison term.

After a federal appeals court upheld his conviction this year and the US Supreme Court declined to consider further appeals, prosecutors were able to return the two Jansems.

Bakwin got the other five paintings back earlier and sold the Cezanne titled “Bouilloire et Fruits’’ in December 1999 for $29.3 million at Sotheby’s.

All seven paintings, most of them post-Impressionist, had adorned a room in the house of Michael Bakwin and his wife, Doris, who died six years ago.

The highly publicized theft was so devastating to the family, Michael Bakwin said, that he, his wife, and their children moved to Ossining, N.Y., within a year.

According to evidence presented at Mardirosian’s trial, a client of his, David Colvin of Pittsfield, stole the artwork and then left them in the lawyer’s Watertown office.

Mardirosian had the paintings when Colvin was shot to death in February 1979 by two Boston men who had come to his home to collect on a debt.

Mardirosian kept the artwork in Massachusetts until 1988, when he moved it out of the country and eventually to a Swiss bank, prosecutors said. He was able to keep his possession secret through a variety of means, including creating a Panamanian shell company called Erie International Trading Co.

Mardirosian tried to move the paintings to London for sale, prosecutors said. But an investigation by the Art Loss Register, a London-based company that maintains a database of stolen artwork, determined that the artwork was stolen.

The company, which is headed by a hunter of missing art named Julian Radcliffe, contacted Bakwin and brokered an agreement in October 1999 with Erie for return of the Cezanne in exchange for relinquishing claims on the remaining six paintings, prosecutors said. The six were valued together at about $1 million.

Two months later, after getting the Cezanne back, Bakwin auctioned it through Sotheby’s in London.

In April 2005, Mardirosian had four of the remaining six paintings transferred from Geneva to Sotheby’s London auction house in preparation for a sale.

But Bakwin, with the help of the register, filed a suit to void the 1999 agreement and halt the sale. The lawsuit and public disclosure of Mardirosian’s name in connection with the paintings prompted the federal investigation that led to his surrender to federal authorities in 2007.

It took the jury about three hours to convict Mardirosian of possessing six stolen paintings.

Radcliffe, who stood next to Bakwin at the US attorney’s office yesterday, said the saga shows that “art crime doesn’t pay’’ and that hunters of stolen artwork “should never give up.’’

Bakwin has drawn his own conclusions. He now believes that individuals should not own extraordinarily valuable masterworks such as the Cezanne. It is too easy for such artwork to be stolen or destroyed by fire.

“It’s too much responsibility to have something like that,’’ he said.

The Jansems are another matter, he said. Asked whether he intends to hang them in his house in Ossining, he replied, “Yes, probably.’’