James Wormser launched Lot F Gallery in his living room to get edgy, street-inspired artists noticed. It seems to be working. 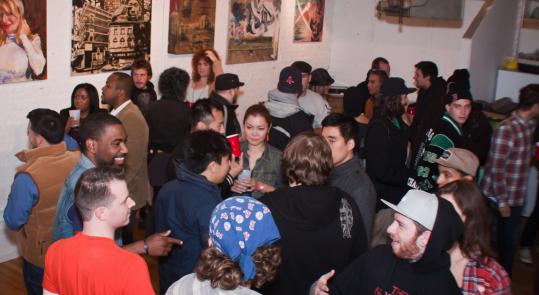 A gathering at Lot F Gallery, which brings in crowds of young people and surrounds them with art on the walls. (Courtney Robertson/Courtney Lynn Photography)
By Liza Weisstuch Globe Correspondent / November 13, 2010

On a recent Friday night, four stories above the deserted Financial District streets, three young men in sneakers and backpacks cluster around a mixed media image of a woman in a corset against a gritty urban skyline. They talk about its composition, drink beer, and deliberate over which club to hit next. A few paces behind them, a woman in a low-cut red dress contemplates purchasing a gold-plated Altoids pendant by Gabriel Urist, whose jewelry has adorned hip-hop luminaries Mos Def and RZA. On a shabby mustard yellow couch nearby, artist Todd Robertson talks with two entrepreneurs about painting a mural in their new office.

A quick scan of the scene — DJ stationed in the kitchen spinning hip hop and obscure Detroit soul, bags of takeout from the Thai joint downstairs — and it’s easy to imagine that this is a standard loft party. But it isn’t. This is a Lot F Gallery opening, and transactions are happening, commissions and collaborations discussed. For a growing number of artists, designers, and young professionals around the city, this monthly scene has become a must.

Playing host is James Wormser, 23, who runs the Lot F Gallery with his girlfriend, Kate Ostreicher. The expansive space — its brick walls slathered with white paint and two industrial heaters hanging from raw ceiling beams — is also their living room.

Amid the relaxed cool of the party, Wormser comes across as an unlikely orchestrator, the anti-curator. Wearing a nondescript gray shirt (“courtesy of Mom,’’ he says), baggy khakis, and beige and brown Nikes, he’s soft-spoken and slinks casually from guest to guest. He greets people, most of whom he knows, with a grin, a handslap, or hug.

Wormser’s object is to sell art, of course, but he calls his approach “laid-back.’’ He doesn’t speak in terms of aesthetics or visual styles, but favors words like “sick’’ and “insane’’ to describe the work he displays. Much of it is street-art inspired. Some of the artists are best known by their graffiti tags, others have MFAs. In Wormser’s vernacular, as long as they “kill it,’’ they have Lot F cred.

Wormser is pedaling a sensibility, the idea that collecting art is as accessible and viable as collecting limited-edition sneakers or skateboards — if not exactly the same thing. While works have sold for several thousand dollars, $400 to $500 is the average price. And barely a year since its launch last September, the Lot F ethos extends far beyond the walls of his loft.

“I just try to get art up. I don’t see Lot F Gallery as this physical space or this gallery at all,’’ Wormser says. “I see it as a brand. It’s more like, you have a restaurant or common space or a home, and this is just the building point.

“There are a lot of people in Boston with a lot of creative energy and they don’t have the right platform to get off the ground. Much as social network has taken over, people want to meet people and shake hands. We have a good group of young people, and I encourage them to take on art shows.’’

Indeed, Wormser has worked with bars, restaurants, and stores all over the city to promote and display his artists. Among them are Good Life Boston; Via Matta; Underground Hip Hop, a record shop near Symphony Hall; and Concrete Jungle, a Newbury Street pop-up shop that was open from July to mid-October.

“James reinvents this place constantly,’’ said Jeff Gilbride, who runs booking and promotions for Good Life, the Downtown Crossing after-work hotspot. He met Wormser at a Lot F party over the summer, wanted to collaborate, and within two weeks, new art was on the walls of the club. “We’ve always shown art, but we’ve sold a lot more since he started showing.’’

Wormser is also working with Karmaloop, the Boston-based online streetwear boutique, to create an art retail page on Kazbah, a collective of brands by emerging designers. Through that, he’s already sold his artists’ work to customers in Italy, Australia, and Korea.

Wormser — who graduated from Emerson College in 2009, majoring in animation and minoring in business and entrepreneurial studies — moved into the loft on Pearl Street, just off Atlantic Avenue, last September. He’d eyed it since his freshman year; it had long been an address where students lived and threw parties. When it freed up and he and Ostreicher claimed it, they enlisted a few artist friends to knock down drywall and remove hundreds of pounds of trash.

He mounted the first show informally, notifying acquaintances through word of mouth, Facebook, and by dropping off cards at Boston shops. “We didn’t know what to expect,’’ he said. But people came. Art sold. And crowds keep coming back.

“One thing that immediately struck me about James is that he’s serious,’’ said Karl Baehr, Wormser’s former professor and director of Business and Entrepreneurial Studies at Emerson. “When I’d talk with him, review his work, it was easy to hone in on the fact that he’s deliberate, thoughtful. He’s not above getting out there and doing it. You can sit around and dream up dreams all day long. Entrepreneurs have to make things happen.’’

Roy DePasquale, a regular at Lot F openings, agrees. “Lot F is a filter people have for getting to the next point,’’ DePasquale says. “No one here is better than someone like Banksy, he just has connections. If you have a show at Lot F, you’re ready for the next step. And as collectors, if you have a little money and you’re ready to invest, this is the place to invest.’’

Some might find it unnerving to have a throng of strangers traipsing through their living room, but it’s perfectly natural for Wormser. He grew up in a Soho loft with his choreographer mother, Liz Milwe, and his father, Peter Wormser, an architect who designed the Vietnam Veterans’ memorial in New York and had his office at home.

“The scene [James] created is like the scene he grew up in. We have a lot of artist friends and there was a lot of art around the house,’’ said Peter Wormser. “My wife’s a dancer and I run my own business. We’re not in the corporate world, so that comes naturally with him. He’s really built a team of friends who are artists who are trusting and counting on him to help them forward their careers.’’

KDONZ, 23, an artist who regularly shows at Lot F, is one of them. He knows Wormser from Emerson and credits him for turning his animation- and skateboard-art influenced work into a commodity.

“James put me onto the art trade. The idea of putting my work onto someone else’s wall and have other people look at it was his idea,’’ he said. Wormser has not only sold the artist’s work overseas, he introduced him to a designer who commissioned KDONZ to do 10 T-shirt designs.

Todd Robertson, 31, a painter and toy designer, was selling his work on Newbury Street when Ostreicher noticed his exuberant neo-graffiti paintings and commissioned him to do a piece. A year later, Wormser ran into him at a party and within months, Robertson’s pieces were hung on Lot F’s walls and selling for triple digits, far more than he could get on the sidewalk.

“I have someone constantly looking out for opportunities for me,’’ said Robertson. “I can focus on what I’m doing artistically now that I have James to help me out in a business sense. He’s built a home we all live in.’’

Liza Weisstuch can be reached at liza.weisstuch@gmail.com.