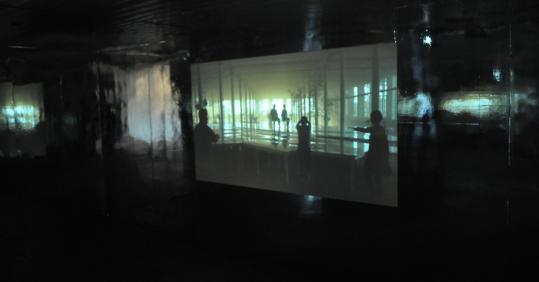 A still from Megan and Murray McMillan’s video installation “What Stands Between Us and the Sun.’’
By Cate McQuaid Globe Correspondent / November 10, 2010

For a two-minute video, Megan and Murray McMillan’s marvelous installation “What Stands Between Us and the Sun,’’ now up at Axiom Center for New and Experimental Media, required a lot of work.

As Axiom director Heidi Kayser tells it, the couple rented an empty 25,000-square-foot warehouse in Central Falls, R.I., for a month for just $200. They built a huge platform and covered it in reflective Mylar to construct a lake, and then erected a system of ropes and pulleys to pull a rowboat across it. A small crew showed up before dawn one day to work the pulley system and make the video. They recorded as the sun rose and poured through the warehouse’s generous windows, splashing over the lake’s surface.

That back story matters, because while “What Stands Between Us and the Sun’’ is hypnotically beautiful — a world unto itself — it also lays bare all the work that went into it.

The video projection is set up in a dark gallery lined with Mylar. The film begins with a man and a woman seated in the boat in a hushed, golden light that shimmers on the lake’s surface. We also clearly see that the “lake’’ is a platform, that there are tall windows in the distance, and pillars — no doubt the warehouse’s support beams — at intervals throughout the lake. The boat begins to move slowly. It’s captivating, so maybe you won’t notice the people over to the side working the pulley that moves it.

The boat stops, and the couple disembarks. They set up chairs to watch the sun. The crew, now in the foreground, works more pulleys to pull portions of the reflective platform up to form an open, mirrored box around the pair — just like the gallery in which the viewer stands.

The artists cleverly balance the spinning of illusion against what we perceive as real. When the video returns us to our own physical reality in the gallery, the McMillans close the circle; reality and illusion are no longer opposites, but elements that spiral into and feed one another.

The same can be said of performer and spectator, of projection and reflection. As I watched the McMillans fold up their chairs at the end of the scene, and heard the creak and crank of the pulleys lowering the platform back into place, a subway train rumbled to a stop in the Green Street MBTA station, just below the gallery. It felt almost scripted, as if now the mirrored walls around me would also drop, like magic, to reveal the real world beyond. Or maybe just another dream.

Parallel but unique
Photographer Bruce Myren has been on something of a treasure hunt, following the 40th Parallel across the country, and stopping at its juncture with each longitude to photograph the landscape. That’s about every 53 miles. Who knows what he’ll find at each stop? Field, lake, town dump, interstate highway? Each venue offers a different challenge.

His show at Gallery Kayafas offers 10 such stops across Missouri, Kansas, and Colorado. He shoots with an 8x10 view camera, which allows for a luscious degree of detail, and each color triptych feels enveloping.

“N 40°00’00’’ W 95°00’00’’ Fillmore, Missouri, 2007’’ unfolds beneath an epic sky, with unfurling gray clouds lined and fluffed with white; beneath, a dry, gold-brown field stretches to a horizon line studded with green trees — the viewer is dwarfed by the Great Plains landscape. But in “N 40°00’00’’ W 98°00’00’’ Webber, Kansas, 2007’’ Myren has us low in a field dominated by a birdseed crop, with brown, beady blooms and green fronds. Trees that rise in the distance are out of focus, but their shapes echo those of the plants. Myren throws his dice along this middle latitude of the United States, and he doesn’t know what he’ll roll, but he usually finds something worth capturing.

A soap-bubble effect
Roland Flexner was lauded this year for his ink drawings at the Whitney Biennial, but he’s been making masterful works with ink for years. The Cartin Collection closes out its run at Ars Libri with a show of six of Flexner’s drawings made with soap bubbles and ink. Each is a chemistry experiment, a mix of materials and process.

The variety is remarkable. All are untitled. In one, the interior flows and curls like the inside of a wave. Another is a satiny pale gray, edged with concentric circles, with just a speckle of dark dots near the center. A third is ringed with a dust-fine splatter, a record of the bubble’s burst, but inside the interaction of soap and ink is as stubborn as that between oil and water; the soap here is pale, the ink dark, and it’s like a view of the earth from space, with soapy areas as land and the ink as the oceans. The world in a soap bubble — it’s a gorgeous vision, and let’s hope not a prescient one.

MEGAN AND MURRAY MCMILLAN: What Stands Between Us and the Sun At: Axiom Center for New and Experimental Media, 141 Green St., Jamaica Plain, through Nov. 27. 617-522-6710, www.axiomart.org