THIS STORY HAS BEEN FORMATTED FOR EASY PRINTING
Frame by frame

A landscape of intimacy and imagination 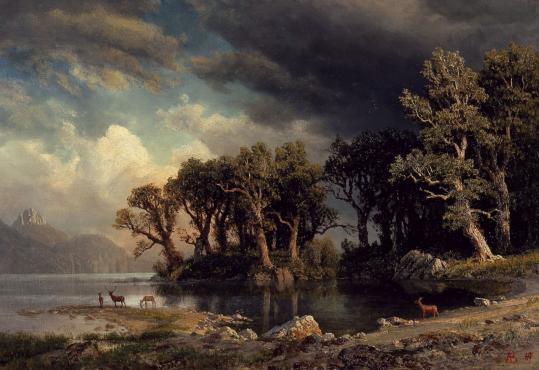 Albert Bierstadt painted this picture, which is tucked away in the Addison Gallery of American Art in Andover, in 1869 — the same year the transcontinental railroad was completed.

Too many people these days associate Bierstadt with grandiosity, pomp, and a kind of troweled-on nationalistic rhetoric that has all the moral charm of President George W. Bush’s 2003 “Mission accomplished’’ moment on board the USS Abraham Lincoln.

That’s too bad. Bierstadt was born in Germany but grew up in New Bedford, where his father made casks for the whaling trade. In his early 20s, he returned to Germany to study art at the Düsseldorf Academy (the meticulous, metaphysical Romanticism of Caspar David Friedrich seems to have touched him) before returning, via a stint in Rome, to the United States.

It’s true, Bierstadt specialized in presenting the American West as an airy, gilded theater for Manifest Destiny. It’s also true that his vision went down well with the industrialists who were busy subduing the same sublime and untamed territories he was painting.

One of Bierstadt’s paintings, based on studies made during a seven-week trip to the Yosemite Valley, had, six years earlier, become the most expensive picture by an American ever sold. And as the first transcontinental railroad approached completion, the magnate Collis Huntington commissioned Bierstadt to celebrate the achievement with another of his overpowering epics, a 6-by-10 foot canvas called “Donner Lake From the Summit.’’

But the Addison’s “The Coming Storm’’ — although it was painted around the same time — is a very different kind of picture. To begin with, its surface area is approximately 1 percent of “Donner Lake.’’ You could tuck it under your arm and take it on the T.

But look at the world it conjures! Its distant peaks and stirring skies seem to stretch infinitely in every direction. And yet, magically, it also conjures an intimacy as mysterious and palpable as any American painting I know.

There is something hypnotic about the placement of those left-tilting trees (they seem braced against the movement of the clouds), some of whose trunks are gilded by slanting light, while others recede into darkness.

The sandy shoreline on which the lone deer stands reads like a path that take us around the edge of the bay and into the picture’s secret heart. Those distant, dark trees silhouetted against the blackening sky stir primeval fears even as they promise shelter and protection.

We know the scene was invented, but its artifice doesn’t bother me. It was a faithful report not on any particular place but on the workings of Bierstadt’s imagination.