Out of the past, toward the camera 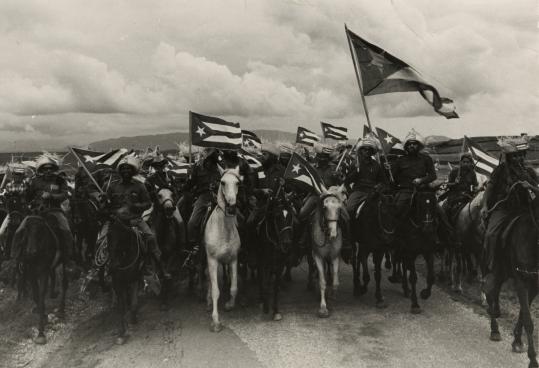 NEW YORK — Photography arrests time. Museums collapse it. They collapse space, too. It’s hard to imagine a more potent demonstration of this twin space-time capacity than the two shows currently at the International Center of Photography.

A quarter century and well over 4,000 miles separate the Spanish Civil War and Fidel Castro’s 26th of July movement. Yet the two connect on multiple levels — visual, emotional, ideological — in “The Mexican Suitcase: The Rediscovered Spanish Civil War Negatives of Capa, Chim, and Taro’’ and “Cuba in Revolution.’’ Both shows run through Jan. 9.

“The Mexican Suitcase’’ has as its source one of the all-time finds in photographic history. It had been assumed for almost seven decades that Robert Capa’s Spanish Civil War negatives had been destroyed. This was no small loss. Capa, fearless and glamorous, is as close to an avatar as photojournalism has had. His time in Spain was when Capa the photographer started to become Capa the legend. Then in 2007 three boxes were found in Mexico City containing almost 4,500 negatives. Most were Capa’s. There were also others by David “Chim’’ Seymour (along with Capa, a cofounder of Magnum, the legendary photo agency); Gerda Taro, Capa’s lover; and a few by Fred Stein, consisting mostly of portraits of Taro.

The show samples that discovery. The images themselves are arresting. How could they not be? Few conflicts have captured the modern imagination as the Spanish Civil War did. Even three-quarters of a century later, scenes of military and civilian life from Madrid and Teruel and the Basque country retain a special power. So do Chim’s portraits of Garcia Lorca, taken shortly before the poet’s death, or Capa’s of Ernest Hemingway, conferring with fellow reporters.

Yet the show’s larger purpose has more to do with the photographs than their subject matter. With all due respect to the photographers, the most eloquent items here are the three cardboard boxes, all the more beautiful for being aged and battered. Equally beautiful, in their patinated way, are the faded and yellowed negative envelopes they held.

The idea behind the exhibition is to give a sense of the photographers’ working procedures and how their work was disseminated. So we see blown-up contact sheets along with both vintage and newly developed prints (many of the latter previously unknown). In addition, display cases contain contemporary magazines with those images. It’s almost like seeing in retrospect the birth of media studies. That said, there’s nothing didactic about the show. It’s a model of explanation without pedantry.

With “Cuba in Revolution,’’ substance predominates over style. More than that, style becomes a kind of substance. The sense of upheaval, urgency, and ideological fervor felt in the Spanish Civil War photographs finds a counterpart in these 180 images, taken by 30 photographers. That’s a lot of pictures, but the number doesn’t feel overwhelming or padded. The images are that varied, that exciting.

Some of the photographers are well known: Henri Cartier-Bresson (another cofounder of Magnum), Elliott Erwitt, Burt Glinn, Rene Burri. But many of the most striking images come from anonymous or little-known photographers. The several photographs by the Cuban photographer Constantino Arias, for example, offer an extraordinary, and extraordinarily damning, look at pre-Castro Havana: high-rolling American tourists, the grimness of tenement life, student protests.

Style becomes substance on the walls of the ICP because the Fidelistas all but made style as substance official policy. They instinctively understood the power of the image. Military fatigues, beards, cigars: These were statements as well as matters of costume, grooming, and indulgence.

Something as basic as machetes and hats become a version of that classic radical image, massed clenched fists, in a Flip Schulke photograph. Two bearded, fatigues-wearing Cubans standing inside the Lincoln Memorial send a political message simply by virtue of their appearance. Che Guevara became a preeminent symbol of the ’60s as much for what he looked like as what he stood for. An entire gallery is dedicated to images of his corpse, and with justification. Even in death he was that compelling a figure visually.

If self-awareness marked the Cuban revolutionaries, so did what we can now recognize as an essential conservatism. A short Cuban film from 1965 plays near the end of the exhibition. An attack on the Beatles, it’s so simplistic it includes shots of a chimpanzee playing drums. Poor Ringo! It’s a reminder that revolution is not necessarily the same thing as liberation. Well before Che headed off to Bolivia to foment revolt, Fidel was hobnobbing with Nikita Khrushchev.

Maybe the most telling image in the show is Raul Corrales’s “La Caballeria (The Cavalry),’’ from 1960. Flags flying, Fidelistas on horseback fill the frame beneath threatening clouds. It’s a thrilling, over-the-top sight, poised between glory and self-parody. As their mode of transportation suggests, the riders come out of the past. They, too, seek to collapse time. Except that they can’t. It’s not the future they’re heading toward. It’s the camera.