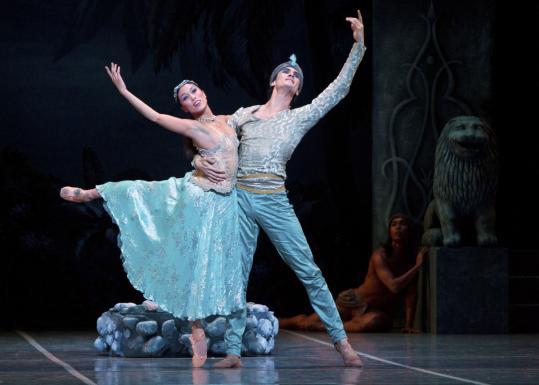 The late 19th-century ballet “La Bayadère’’ straddles a choreographic time zone: It has one leg in the exuberant melodrama and showmanship of romanticism and the other in the etched proportions of classicism. The Boston Ballet production of this three-hour extravaganza — choreographed by Florence Clerc after Marius Petipa and with music by Ludwig Minkus — is at once breathtaking and interminable, heartbreaking in its lyricism and worthy of eyerolling in its mimed cliches.

Except for the exquisitely timed “Kingdom of the Shades’’ of Act III, it’s not the choreography that determines which camp a particular dance falls in but rather the person who gives that dance life.

The story is a simple and — predictably — tragic one: Nikiya, a young Indian temple dancer (or bayadère), and Solor, a warrior, are in love. But Solor has been pledged in marriage to the regal Gamzatti, whose father, The Rajah, has brought the two together for political reasons. The High Brahmin, played with stiff arrogance by Bo Busby, loves Nikiya, too, and furious at her spurning of his advances, betrays the Nikiya-Solor union to The Rajah. Hence Nikiya must die — and she does so dreadfully, from the bite of a poisonous snake. Solor, bereft, finds solace in an opium-filled hookah, and hallucinates the mysterious ritual of the Shades, as they journey, with the spirit of Nikiya, into eternity.

Lia Cirio as Nikiya is a pellucid mix of intensity and light. Her vulnerability socks you in the gut. In her hand-to-hand battle with Gamzatti (Kathleen Breen Combes) and her dance at the betrothal of Gamzatti and Solar, her arms — ending in snapped wrists — are as fragile as broken bird wings and her backward arcs are as open into nothing less than a cry.

Combes, for her part, is a now aiming-to-please, now spoiled daddy’s girl, whose character emerges as much through her stance and nearly swishing walk as her dancing. In her pas de deux with Solor, the strong beautiful line of her legs ends in feet are sharp as compass points.

Lasha Khozashvili’s Solor is a man of honor who gets swayed by circumstance. Khozashvili stuns with his alarming jumps and spirals. His legs go on forever but are never out of control, and he launches into leaps that hover in midair longer than the laws of physics should allow and then touch down soft as powder.

Joseph Gatti as the Golden Idol glistens as he slices through space, crackling with muscular spins and lightning-quick runs.

The company previewed the Kingdom of the Shades in its “Night of Stars’’ at the end of October, and though the corps of 24 women in crisp white tutus showed some wobbles that night, the air of mystery they exuded as they solemnly extended a leg in arabesque, then twisted from the waist, was stronger than in last night’s concert. True, they executed the fiendishly difficult unison work with more precision last night, but they lost a bit of the eternal timelessness of the sequence.

Then again, it could be that the overabundance of mime and sense of technique-for-technique’s sake on parade in the previous two acts undercut the transcendence that the Kingdom of the Shades can achieve when it stands on its own.

Thea Singer can be reached at thea.singer@comcast.net.