Yale Rep serves regret and recrimination on the rocks 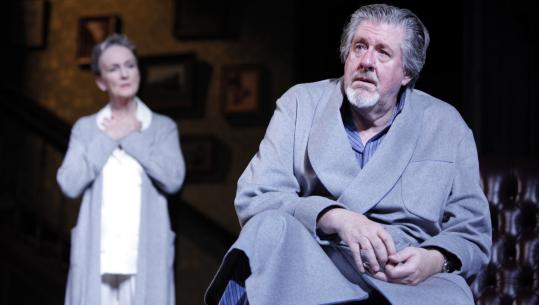 NEW HAVEN — Someone always seems to be mixing a drink in the Yale Repertory Theatre production of Edward Albee’s “A Delicate Balance.’’

But the characters lavish even more time and care on the task of assembling verbal cocktails — one part regret, two parts recrimination — which in due time they toss at one another.

In other words, a laugh riot “Balance’’ ain’t. Even granting that no one comes to an Edward Albee play looking for uplift, this is a cheerless, sometimes airless endeavor.

With this 1966 play, which won the Pulitzer Prize for drama (a prize that, incredibly, eluded Albee’s “Who’s Afraid of Virginia Woolf?’’), the playwright was trying to dramatize spiritual emptiness, dread, and disconnection. So the gloomy atmosphere established by director James Bundy makes sense. (Even the third act, which is set at breakfast time, is suffused with a nocturnal mood.)

But “Balance’’ remains an abstract exercise rather than a drama in which ideas are made flesh. It’s never clear what the stakes are for the unhappy family at its center, or for us in the audience. From the play’s beginning to its end, the main characters don’t move a whole lot, psychologically speaking.

They do talk, though, and given that this is Albee, there is an entertainingly misanthropic bite to some of the play’s dialogue. The affluent WASP couple trying to maintain a delicate balance are Tobias, played by Edward Herrmann, his familiar ruddiness tempered by a white goatee, and Agnes, played by Kathleen Chalfant, her hair cropped short.

There is clearly some wry affection between Tobias and Agnes, but their elaborately formal exchanges bespeak a certain wariness, too, a sense of old marital injuries on which scar tissue has not quite fully formed. The most painful wound was a mutual one: the death of their son at a young age.

At present, the household includes Agnes’s sardonic sister Claire (Ellen McLaughlin), with whom, it is hinted, Tobias might once have had a brief fling. McLaughlin brings a spiteful brio to her portrayal of Claire, who revels in her role as disruptive force, as the member of this buttoned-up clan who is most willing to say the unsayable. Her very first words are an apology to Agnes, drenched in acid and containing a sly, accusatory twist: “I apologize that my nature is such to bring out in you the full force of your brutality.’’

Yet we don’t really feel that brutality in Chalfant’s Agnes. Unlike Katharine Hepburn, whose Agnes in the film version of “Balance’’ radiated a forbidding, Machiavellian power, Chalfant does not evoke a chill. So when Claire declares that she wishes Agnes were dead, our reaction is to wonder why she is saying such terrible things about her seemingly un-monstrous sister. Herrmann, meanwhile, uses his enigmatic reserve to generally good effect. He endows Tobias with the deceptively phlegmatic air of a man who often seems to be trying to make up his mind whether, or how, to react to the provocations of his family, and who is alternately bewildered and angered by what his life has become, as we see in a late scene where Tobias reveals his vulnerability.

This far-from-cozy domestic circle is expanded and complicated by the arrival of Julia (Keira Naughton, recently seen in the Huntington Theatre Company’s production of Gina Gionfriddo’s “Becky Shaw’’), the daughter of Agnes and Tobias. Julia’s marriage is on the rocks — it’s her fourth, though she’s only 36 — and she is seeking refuge with her parents. Claire feels threatened by the return of this adult child (played with a nicely bratty quality by Naughton) to the nest. “Have you come to take my place?’’ she asks Julia. The daughter soon encounters another, bizarre obstacle in the form of Harry (John Carter) and Edna (Kathleen Butler), the best friends of her parents.

It turns out that Harry and Edna, too, are seeking refuge, but in their case from a nameless terror that seized them both while they were at home. They move right in, claiming Julia’s old room for their own. “We have rights here. We belong,’’ Edna tells Julia, her air of calm entitlement reducing the younger woman to incredulity and, eventually, hysterics.

The unhinged surreality of the showdown between the displaced child and the strange elderly duo has the energy and urgency lacking in too much of “A Delicate Balance,’’ creating a welcome state of disequilibrium in which the family’s balance, and ours, is upset.