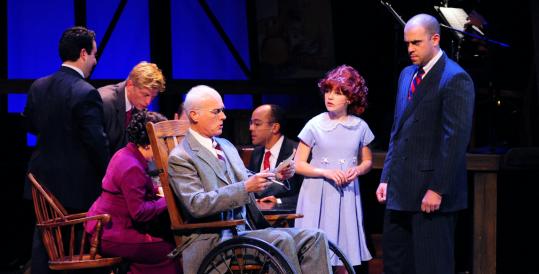 More than 30 years after the comic strip ended and Charles Strouse and Martin Charnin’s musical version of “Annie’’ opened, the optimistic orphan is still delighting audiences. The Wheelock Family Theatre, as part of its 30th anniversary, returns to the family favorite with a first-rate cast that works hard to overcome some awkward staging.

The heart of the show is Annie, and Grace Brakeman, 13, with a pure, unadorned voice, delivers a sincere performance that captures our heroine’s disappointments and determination. From the heartbreaking opening number, “Maybe,’’ to the sweet “I Don’t Need Anything But You,’’ and even, I admit, through the many reprises of “Tomorrow,’’ Brakeman keeps the saccharine level in check. The crowd of orphan girls offers strong backup, with “It’s the Hard Knock Life’’ and “You’re Never Fully Dressed Without a Smile’’ highlights of the show.

When she gets to the home of Oliver Warbucks, Timothy John Smith plays the billionaire businessman as gruff and distracted at first, but becomes fascinated by Annie’s spirit and her vulnerability. With his reliable secretary Grace (Aimee K. Doherty)encouraging him, he moves easily from the hearty “N.Y.C.,’’ to the tender “Something Was Missing.’’ The playful chemistry between Brakeman and Smith makes their improbable relationship believable, and allows the audience to see the loneliness and the power of the connection for both adult and child.

As the orphanage’s disgruntled matron, Cheryl McMahon’s Miss Hannigan wavers between wicked and worn-out and has fun with “Little Girls,’’ while John F. King, as her ex-con brother, Rooster, takes a stylish if slightly sleazy trip down “Easy Street.’’

Musical director Steven Bergman does a terrific job with his eight-piece band, finding the nuances in the score, especially the clarinet parts, without ever overpowering the singers.

The opening of the musical suggests the action is taking place in a radio studio, but the conceit is not consistently carried through the entire show, so it becomes a little confusing. Director Jane Staab does bring the action out into the audience, effectively setting Hooverville in the aisle, but Anita Fuchs’s set of multilevel wooden frames looks like it was left over from another show, and the actors never seem comfortable on it.

Annie’s transformation, from scruffy orphan to mop-top in the iconic red dress, is also inexplicably lost, so it’s never clear why she suddenly has curly hair.

But none of these quibbling details mattered to the children sitting next to me, who were rapt through the entire show. Marcus McKone-Sweet, 3, said he liked the noise the orphans made with their buckets in “Hard Knock Life,’’ while his sister Maya, 6 1/2, said her favorite part came when Mr. Warbucks said he would find Annie’s parents.

When kids can hear both the musical and the emotional rhythms of the show, the production can call itself a success.

Based on the comic strip “Little Orphan Annie’’ by Harold Gray.