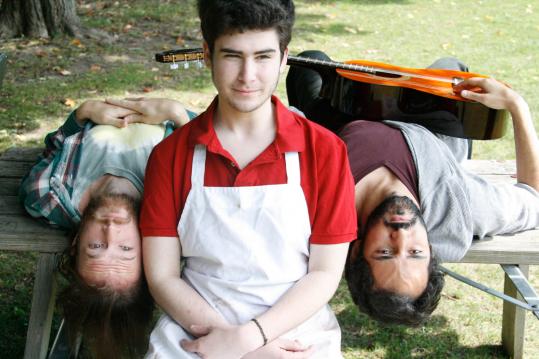 At Annie Baker’s compassionate and insightful best, she can endow a few stammered words with the illuminating force of a soliloquy.

A good thing, too, because Baker’s minimalist approach in “The Aliens’’ produces stretches of tedium, and at times you sit there wishing somebody would do something.

One suspects Baker wants us to feel that way, wants to make palpable the anomie and directionlessness of her three characters. The playwright wouldn’t have stipulated that one-third of the performance of this play be silent and that “the pauses should all be uncomfortably long,’’ unless she wanted to challenge the audience. On balance, Company One’s production of “The Aliens’’ is a challenge worth accepting.

As with Baker’s “Circle Mirror Transformation,’’ with which it shared this year’s Obie Award for Best New American Play, “The Aliens’’ is an impressionistic take on the seemingly random way people breeze into our lives and then, sometimes, breeze right out again, though not without leaving a significant mark.

When the play begins, two bearded, thirtyish guys named Jasper (Nael Nacer) and KJ (Alex Pollock) — neither of whom appears to have a hygiene fetish — are sitting behind a coffee shop in Shirley, Vt. I’d say they were killing time, but KJ, at least, doesn’t look as if he could muster the will to do anything that involves a transitive verb. He wears a beatific — or is it stoned? — expression as he lounges at a table, gazing dreamily off into the distance. No such tranquillity is evident in Jasper, who squats on a milk crate, taking angry puffs from a cigarette, a storm raging in his face.

Minutes pass. No words are spoken. Finally, KJ begins to sing. When he’s done, Jasper offers a few words (six, to be precise) of praise, and they subside into silence again. Eventually, the silence is broken. Jasper bitterly complains about his ex-girlfriend. He gets so exercised that he kicks over a chair.

At that point, a 17-year-old employee of the coffee shop named Evan (Jacob Brandt) materializes. Clearly nervous — he is quivering like a tuning fork — Evan informs the two older guys that they’re not supposed to loiter behind the shop. But he doesn’t really seem to want them to go.

Bit by bit, a kind of bond starts to form between the misfit duo and the tremulous, friendless teenager, well played by Brandt, a Harvard freshman. Evan tells them about the music camp where he plans to work; KJ and Jasper tell him about the rock band they used to have, one of whose many names was The Aliens, after a poem by Charles Bukowski. “You gotta read Bukowski,’’ Jasper tells Evan. Jasper never graduated high school and describes himself as “a living piece of trailer trash,’’ but he is writing a novel, and to judge by the excerpts we hear him read, he has significant literary chops.

With the dark, brooding charisma Nacer brings to the role of Jasper, especially when he is playing guitar or reading his novel-in-progress, it’s easy to see how he could evoke a certain hero worship in Evan. But Baker does not develop the relationship between Jasper and Evan in enough depth to make credible the devastating impact on the youth when a crucial development occurs later in the play.

As for KJ, he responds with unvarnished enthusiasm to pretty much everything Evan says, which the lad clearly needs. But KJ is not really mentor material, at least not in any traditional life-coach sense. When Evan musters the courage to admit that he met a “pretty cool’’ viola-playing girl at music camp, KJ starts free-associating in graphic detail about his own sexual experiences.

Pollock’s excellent performance as the elfin KJ accounts for most of the play’s laughs — he seems to have journeyed to Vermont from Frodo’s Shire by way of Woodstock — and also the play’s strongest claim on our emotions. In a prelude to a major revelation late in “The Aliens,’’ KJ simply says “Ladder’’ over and over, dozens of times, traversing an emotional range from childlike defiance to happiness to bemusement to anger before finally arriving in a broken place of grief and desolation.

At moments like that, Annie Baker doesn’t need more than one word to do the job. And I’m guessing that’s just how she likes it.

Presented by Company One at Calderwood Pavilion, Hall A, Boston Center for the Arts.