One Small Step’ lifts off for a fun, inventive adventure 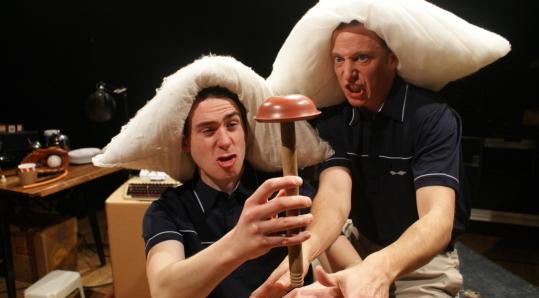 A plunger, two pillows, cardboard boxes, and a lampshade are just a few of the household items put to creative use in the Oxford Playhouse’s production of “One Small Step,’’ playing at the Paramount Black Box through tomorrow, presented by ArtsEmerson. This wonderfully imaginative 60-minute performance piece manages to cram more than a decade of scientific achievement into a format as entertaining for folks old enough to have lived through the Neil Armstrong quote that gives the show its title as it is for kids or high schoolers who’ve just heard about it in a history class.

Two actors — Robin Hemmings and Oliver Millingham — not only portray Werner von Braun, John F. Kennedy, Walter Cronkite, and every astronaut in the Mercury space program, they also simulate space walks, zero gravity, and helicopter rescues with the simplest props and suggestions. What makes “One Small Step’’ so appealing is director Toby Hulse’s determination to honor writer David Hastings’s attention to historic accuracy while presenting the information in a playful way.

In addition to the seemingly random items the actors have gathered to make the Atlas and Saturn rockets (with launches that are worth the price of admission alone), the set is littered with artifacts from the era, including a slide projector, record player, reel-to-reel tape recorder, and typewriter, which are worked into the action for sound effects and visual cues. Originally written as a radio play, “One Small Step’’ also includes just the right musical backdrop: Nat King Cole opens the play to set the scene in 1957, with the launch of Sputnik, and the famous four bars from Strauss’s “Thus Spake Zarathustra,’’ made most famous by Stanley Kubrick’s “2001: A Space Odyssey,’’ set the stage for the Apollo missions.

With pillows perched on their heads to suggest Soviet scientists, windbreakers for space suits, and cardboard boxes cut out to represent the astronauts’ backpacks, Hemmings and Millingham deliver their story with the enthusiasm of 10-year-olds and the commitment of trained actors. A colorful beach ball represents Sputnik, a sheet thrown over one bent-over actor suggests the bumpy landscape of the moon, and most extraordinarily, file cabinet drawers become the lunar module’s landing ladder. The effects are unapologetically silly, and yet they immediately call to mind the iconic imagery of the Apollo space missions.

What makes “One Small Step’’ more than just a clever skit is the script’s strong dramatic drive, along with a few pivotal, poignant moments, including the little-known deaths of nearly 200 Soviet scientists and astronauts killed on the ground when a rocket exploded during liftoff. With so much ground to cover, there’s not a lot of time to dwell on the tragedies, but the pause the actors take at this moment highlights the human cost of these programs and the drama inherent in the race to the moon.

Part entertaining history lesson, part ingenious theater, “One Small Step’’ also serves as a reminder of the inspiration of President Kennedy’s challenge to reach the moon, the determination of the scientists to make it happen, and the fascination the adventure had for people all over the world, 2.5 billion of whom watched the launch of Apollo 11 and Armstrong’s first steps on the lunar surface.

Presented by ArtsEmerson at the Paramount Theatre Black Box, through tomorrow . Tickets: $39. 800-824-8000, www.artsemerson.org