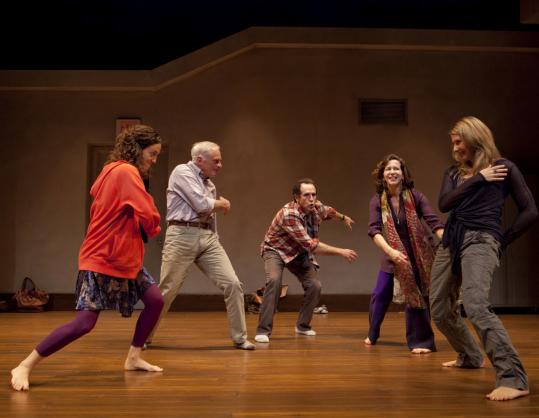 In “Circle Mirror Transformation,’’ indefatigably upbeat theater teacher Marty, played by Besty Aidem (second from right), leads her four students through a series of seemingly banal acting exercises in which what is not said is as important as what is. (T. Charles Erickson)
By Don Aucoin Globe Staff / October 22, 2010

There’s a tentativeness to the characters in Annie Baker’s “Circle Mirror Transformation,’’ a tendency to recalibrate their thoughts in midsentence that gives them a case of verbal hiccups.

And yet an awful lot gets expressed in a sneakily affecting Huntington Theatre Company production of “Circle,’’ directed by Melia Bensussen and featuring a skilled cast that knows how to mine every “um’’ and “uh’’ and pause — and there are many — of Baker’s script to give poignant voice to five lost souls.

Apart from its considerable individual merits, “Circle Mirror Transformation’’ represents a strong kickoff for the Shirley, VT Plays Festival, an experiment in which three Boston theaters — the Huntington, Company One, and the SpeakEasy Stage Company — are simultaneously producing three different plays by the 29-year-old Baker. The plays are all set in Shirley, Vt., but don’t look for it on the map, weekend leaf-peepers; the town is fictional.

But the emotions are plenty real in “Circle,’’ which shared an Obie Award for Best New American Play this year with Baker’s “The Aliens’’ (the play Company One is tackling). “Circle’’ unfolds in a series of short scenes, some of which seem to last no longer than a radar blip. Marty (Betsy Aidem), the indefatigably upbeat teacher of a “creative drama’’ class in a drab studio in a community center, leads four students through a series of seemingly banal acting exercises. Seemingly.

Her students include her husband, James (Michael Hammond); Lauren (Marie Polizzano), a sullen high school student from a troubled family; Schultz (Jeremiah Kissel), a newly divorced and deeply insecure carpenter; and Theresa (Nadia Bowers), who recently moved to Shirley and is still recovering from the end of a toxic long-term relationship.

To Lauren’s annoyance and Schultz’s bafflement, Marty’s method does not include rehearsing dialogue or scenes from actual plays. Instead, she has the students sit in a circle while each sequentially speaks one word in an ever-evolving sentence, and lie on the floor while each contributes one number in a count to 10. But the teacher has another trick up her sleeve, and this is the one that will eventually peel back some revealing layers.

She has the students don the guise of one of their classmates and proceed to tell that person’s life story.

At first, it is an innocuous bit of role-playing, but as the weeks go on and emotional entanglements begin to occur, the lines begin to blur. Who is really speaking, and who is really being spoken to? What sorts of messages are being communicated, what secrets are revealed?

Then, fatefully, Marty asks the students to take part in another exercise, this one involving private thoughts written on paper, and she and the others get more truth than any of them had bargained for.

Baker, a Cambridge native who grew up in Amherst, has a keen ear for the halting, stop-and-start rhythms of everyday speech, and the way feelings emerge in what is not said, or what is half-said. Take this exchange, elliptical yet packed with portent, between James and Theresa:

As Theresa, Bowers delivers a finely etched portrait of a woman whose power over men is not matched by a corresponding self-confidence. Kissel’s Schultz is a compellingly twitchy bundle of nerves and need: hard to watch, impossible not to watch. Polizzano’s portrayal of Lauren is pitch-perfect in its adolescent self-consciousness; she captures the passive-aggressive way many teenagers, when among adults, try to melt into the woodwork and occupy center stage at the same time.

As James, Hammond deftly suggests that beneath his knowing serenity is a guy whose moral compass just might be a bit wobbly. And of course, there is Marty. Aidem poignantly traces her passage from beaming, maternal teacher to a woman set adrift, her own circle broken.

Presented by Huntington Theatre Company at Wimberly Theatre, Boston Center for the Arts.