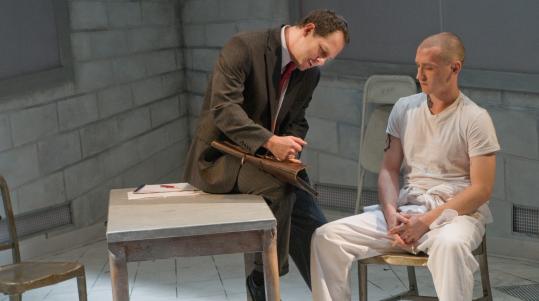 WATERTOWN — An air of tumult suffuses the New Repertory Theatre’s production of David Gow’s “Cherry Docs.’’ A chair is smashed against a metal table, denting the table and shattering the chair. Legal papers are flung to and fro. Curses, sobs, and shouts rend the air.

But the power of this bracingly intelligent play derives less from its explosive moments than from the interior struggles that register on the faces of two exceptional performers — Benjamin Evett and Tim Eliot — when they are not saying a word or breaking a thing.

Whether or not you buy the ending of “Cherry Docs’’ — and I’m not sure I do — it’s hard to remain unmoved by Gow’s exploration of the toll taken by bigotry, the possibility of redemption, and the impact a pair of utterly dissimilar human beings can have on each other, for good or ill.

The seemingly cheerful title “Cherry Docs’’ actually is drawn from a horrifying crime: It refers to the steel-toed Doc Martens combat boots that Mike Downey (Eliot), a neo-Nazi skinhead in Toronto, used to kick an immigrant from South Asia more than 30 times in a completely unprovoked assault. The victim died three weeks later — though not before penning a heart-rending letter that surfaces later in the play — and Mike now faces a murder charge.

That’s where a legal-aid lawyer named Danny Dunkelman (Evett) comes in. Liberal, middle-aged, and Jewish, Danny is assigned to defend Mike, but from the very beginning he makes clear his seething contempt for the tattooed white supremacist. “What kind of defense am I going to concoct for someone like yourself?’’ Danny asks him.

Mike maintains he was drunk during the assault and did not intend to kill his victim, but he also — in an echo of some of the more extreme rhetoric currently surrounding the immigration debate in the United States — tries to justify his free-floating rage by saying “We’re losing the English-Canadian white way of life.’’

He taunts Danny, saying that as “a humanist, liberal Jew . . . you have to do your very best,’’ before adding matter-of-factly: “In an ideal world, I’d see you eliminated. In this world I need you more than anyone.’’ He tells Danny he doesn’t want “the movement’’ to be put on trial, but only his crime.

Danny’s response is to force Mike to pore over hundreds of pages of his personal record and to be deeply involved in mapping a defense strategy. “We don’t want anyone saying there was a conspiracy, that you didn’t get a good crack at the bat,’’ Danny tells his bewildered client. But there seems to be more to it than that. He sees glimmers of intelligence in Mike, and maybe, for all the vile rhetoric and the horrendous crime, someone worth saving.

Within this polar-opposites-forced-to-work-together structure (it could be titled “Two Angry Men’’), Gow builds a complex character study.

Even as Danny steadily works on Mike, verbally battering him and forcing him to confront the full dimensions of what he’s done and what he’s believed, the lawyer starts examining some of the holes in his own life and wondering about the solidity of his own identity. Has he lost touch with the Jewish tradition that so fortified his father? How ambitious is he? Is his work on the case jeopardizing his relationship with his wife? And, more broadly, “How far could I fall, and what would it take, to take me off my balance?’’

With alternating force and delicacy, Evett expertly traces Danny’s journey from his early, fierce certitude to a growing sense of imbalance as his inner conflicts take hold. As Mike, Eliot communicates the skinhead’s loathsome qualities but also the human stakes as one hate-poisoned youth tries to grope his way toward a new understanding of the world.

By the end, both characters have been changed, and, in the case of one of them, in a way that seems too facile. But if you see “Cherry Docs’’ — and you should — chances are you’ll be thinking about it long after you leave the theater.