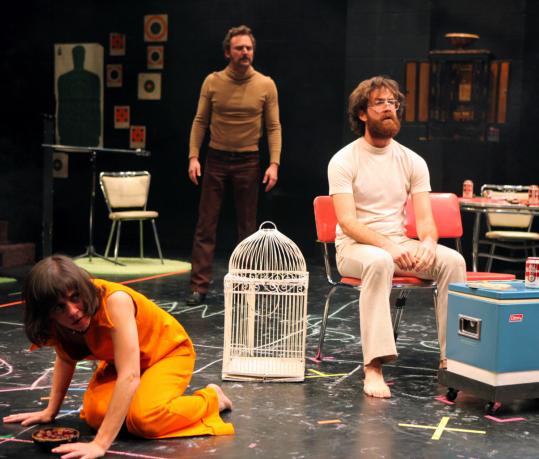 There’s a famous line attributed to Chekhov to the effect that if there’s a gun onstage in the first act, you must be sure to fire it by the final scene.

There is indeed a gun onstage at the beginning of “The Method Gun’’ — actually, it’s in a birdcage, hanging from the perch where the bird should be — and it does indeed get fired near the end of this 90-minute play.

What happens in between is a fragmentary collage of scenes that add up to a quirky, enigmatic meditation on myth and memory, on how theater gets made and what it means to those who make it.

A production by Rude Mechs, an Austin, Texas-based theater company, “The Method Gun’’ is sometimes beguiling, sometimes underenergized as it tells the decidedly nonlinear tale of a troupe of five actors that has embarked on a complicated mission of homage and self-discovery.

The actors are united by their admiration for the legendary (and fictional) acting guru Stella Burden, who, one character tells us, “wanted to use her life as a stage for the performance of all her desires.’’ That may or may not explain why Burden mysteriously disappeared in 1972.

In any case, the actors apparently believe she held the secret key to acting. They decide to try to re-create the rehearsals that Burden’s own acting company labored on year after year for her never-performed version of Tennessee Williams’s “A Streetcar Named Desire.’’

Here’s the thing, though. Burden’s concept was of a “Streetcar’’ with no Stanley, no Blanche, no Mitch, and no Stella.

So the five actors reenact familiar scenes from “Streetcar’’ but speak only the lines of the minor characters: the paper boy, the flower seller, Stanley’s poker buddies. Therefore, we don’t hear lines like, “I have always depended on the kindness of strangers,’’ but we do see the tamale vendor pushing his cart and hollering, “Red hots!’’

It’s an interesting notion, to present a classic shorn of the characters and dialogue that made it a classic in the first place. “Streetcar’’ is a work that occupies a complex place in the theatrical firmament. On the one hand, it’s one of a handful of indisputably great American plays. On the other hand, with its humid melodrama, it treads near the line of risibility, and is consequently ripe for satire. So, too, is method acting, which also comes in for some gentle tweaking in “The Method Gun.’’

Stella Burden, we are told, was a primary exponent of an acting technique called “The Approach’’ (clearly an allusion to the method style). Accordingly, the five actors practice crying and kissing and — in one of the show’s more effective scenes — they howl, weep, dance, twirl, and leap as they plumb their own deep-seated emotions, all in the service of their art.

The action in “The Method Gun’’ jumps around in time, but most of it takes place in the 1970s, as Burden’s acting company tries to make it to opening night without her. Tensions simmer, surface, and eventually explode. “She gave us ourselves, and now we don’t even have that,’’ one character laments.

As if that gun in the birdcage weren’t ominous enough, the emotional risks inherent in acting are literalized by the periodic appearance of a tiger, who announces that his goal is to eat an actor by the end of the evening.

The tiger, weighing in on one of “Streetcar’s’’ rivals for the title of greatest American play, opines that “Death of a Salesman from a Tiger’’ would have made a more exciting title.