A body of work that maximizes provocation 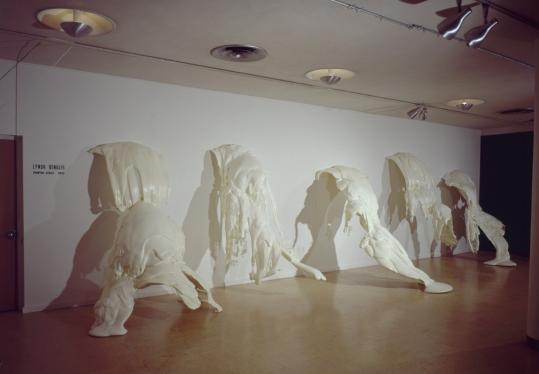 Lynda Benglis’s 1971 installation “Phantom’’ is a series of five spilled polyurethane foam sculptures. Every two minutes the lights in the gallery go out and the sculptures — due to phosphorescent pigment scattered through the foam — give off a green glow.
By Sebastian Smee Globe Staff / October 10, 2010

PROVIDENCE — In 1974, Lynda Benglis did a stunning thing. Having heard that an article about her work was being prepared in Artforum — the high-minded, heavily theoretical magazine that did so much to influence the critical reception of art in the 1970s and ’80s — she suggested that she contribute one of her own works to the issue.

She had in mind a photograph of herself. In the nude.

A centerfold, to be precise.

In the image, which was taken by a fashion photographer but staged by Benglis, her body is lightly greased. Tan marks show, dark shades obscure her eyes, her hair is cropped short.

Benglis, who had already explored the idea of presenting images of herself directly to the public in magazines, proposed that she pay for the centerfold herself. Artforum’s editor declined, on the grounds that the magazine wouldn’t sell its editorial space. So Benglis bought advertising space, and the photograph was published at the front of the issue, just before the contents page.

A furor ensued. Five of the magazine’s editors, among them Rosalind Krauss and Lawrence Alloway, objected to the photo’s publication. They wrote a letter that was published in the next issue of the magazine explaining why.

The image was extremely vulgar, they said (rather stating the obvious). It was “a shabby mockery of the aims’’ of women’s liberation, they added (a claim not quite so easy to prove). And — slumping back into their mode of Marxist hair-splitting — they said its publication made the magazine an accomplice in the exploitation of the artist’s relationship with both the public and the writers who engage with her work.

Benglis, I’m here to assure you, did other extraordinary things. A terrific survey of her work at the Rhode Island School of Design Museum of Art suggests that she has, in fact, been one of the most compelling, fearless, jubilant, and underrated American artists of the past 40 years.

But the Artforum scandal pretty much guaranteed that no discussion of her work would thenceforth ensue without first addressing “that photo.’’

It was, undoubtedly, a spectacular provocation. The year, don’t forget, was 1974; four years after the publication of Germaine Greer’s “The Female Eunuch,’’ feminism’s second wave was cresting.

But it was also — and Benglis always insisted on this — an aesthetic decision, a flamboyant example of self-presentation as art. As a self-portrait, it was continuous with themes in Benglis’s own work, and also with a longer lineage of self-portraiture — one thinks of Albrecht Dürer presenting himself as Christ or, in the 20th century, the photographic role-play of Marcel Duchamp, Claude Cahun, and Andy Warhol. Robert Mapplethorpe, in the 1980s, extended the tradition in his own inimitable direction, and Cindy Sherman, who describes seeing the “Artforum’’ ad as “one of the most pivotal moments of my career,’’ was enthralled by Benglis’s bravado.

The catalog accompanying RISD’s Benglis exhibition, which was organized by the Irish Museum of Modern Art and will travel from Providence to the New Museum in New York, devotes more than 20 pages near the front of the book to the “Artforum’’ affair. It includes full-page facsimiles of the magazine pages in question, and of letters and telegrams written in support of Benglis from feminists, art professors, and fellow artists. It’s also got a sharp essay by art historian Richard Meyer reflecting on the business 30 years later.

But what of the rest of Benglis, the Benglis whose work warranted a feature article in Artforum in the first place?

In the five years leading up to that watershed, she had produced an extraordinary body of work. Taking Jackson Pollock’s sensuously poured and thrown house paint as a starting point, she hit on remarkably effective ways to lure art away from the right-angled rectitude, the tidy completeness of minimalism. She poured polyurethane foam over structural supports that she then removed, leaving hardened, “frozen’’ sculptures of exquisitely random form.

She spilled colored latex or polyurethane flat on the floor, like congealed oil slicks or collapsed soufflés (she called them “fallen paintings,’’ deliberately evoking the specter of the “fallen woman’’). She tied fabric in whimsical knots like a dreamy, double-tasking milliner. And she layered beeswax over strips of Masonite that she then hung from walls like richly corrugated tribal weapons or shields.

Benglis wasn’t the only artist looking for an antidote to minimalist rigors in those years. Richard Serra was scattering strips of rubber latex over gallery floors. Eva Hesse was playing with drooping string and latex suspended from ceilings. And Claes Oldenburg was joking around with deflated, drooping objects.

The flair comes, more than anything, from Benglis’s color. This is where the originality of her contribution seems unarguable. Color, for Benglis, is a way of testing the limits of vulgarity — and joyously spilling over those limits. She uses bright Day-Glo hues that hark back to the hallucinogens and psychedelic swirls of the ’60s. She uses shiny metallic gold and silver. And she uses glitter and sparkles.

Best of all, in a work that is undoubtedly the highlight of the show, she uses phosphorescent pigment scattered through polyurethane foam. The work in question is — shockingly — the only surviving example of a series of brilliant installations Benglis made in 1971 (one of them for the Hayden Gallery at MIT). “Phantom,’’ as it’s called, is a series of five spilled polyurethane foam sculptures that are attached to the wall and cascade out at an angle toward the floor. Three of them make contact with the ground; two remain suspended a foot or two from the floor.

Together, they perfectly embody Benglis’s infatuation with the notion of the “frozen gesture.’’ Like Pollock’s best drip paintings, they combine a sense of explosive energy with a strange, pervasive calm. They’re also flamboyantly sexual, suggesting male ejaculation on a scale undreamed of even by the busiest industrial stud farm.

Every two minutes the lights in the gallery go out and the five sculptures give off an unearthly green glow.

Not everything Benglis tried worked. Some of her works quickly pall in interest, like melted gelato, or a kids’ cooking experiment with food coloring gone wrong. But there is such a strong dose of freedom and, yes, vulgarity in almost everything Benglis does, that it’s impossible in most cases not to give her the benefit of the doubt.

There’s not enough of Benglis’s later work on display in this show. But look out for the series of colored glass and painted ceramic “knots’’ she made in the mid-1990s — they’re tremendous.

The experimental videos she made, in collaboration in some cases with Robert Morris, are forgettable but mercifully short. The Polaroids, which combine flowers with more intimate sexual imagery, are unremarkable, but they suggest a liberated and specifically feminine sexuality that harks back to Georgia O’Keeffe and forward to Pipilotti Rist.