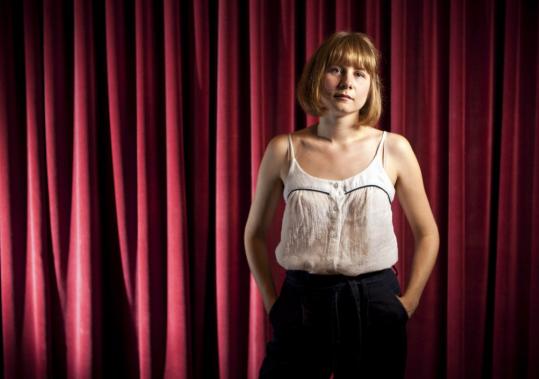 Annie Baker will have three of her “Shirley, Vt.’’ plays performed in a festival. (Aram Boghosian for The Boston Globe)
By Laura Collins-Hughes Globe Staff / October 10, 2010

Annie Baker would like some quiet, please, and she is entirely willing to specify how much.

At least one-third of her play “The Aliens’’ should be silent, uncomfortably so, a note in the text says. The script of her “Circle Mirror Transformation,’’ meanwhile, begins with detailed instructions concerning the length of each pause (at least two seconds), short pause (no less than a second), silence (at least five seconds), and long silence (seven seconds minimum). And no cheating: She uses the “one Mississippi, two Mississippi’’ rule of time measurement, and anyone doing her plays should, too.

Such exactitude is highly unusual, particularly for a playwright who isn’t also a director.

“Yeah, I have the detail-obsessed, controlling personality of a novelist, but I somehow ended up writing plays,’’ Baker, 29, concedes on the eve of a festival of her work in the Calderwood Pavilion at the Boston Center for the Arts.

Errr . . . make that the detail-obsessed, controlling personality of a novelist who gives interviews only by e-mail — also highly unusual. What’s that about?

“I’m terrible at speaking extemporaneously about my work — I get completely tongue-tied and consumed with fear,’’ writes Baker, a Cambridge native who moved to Amherst at age 6 and since 2003 has penned a half-dozen plays set in the fictional town of Shirley, Vt. Now a New Yorker, she won a joint Obie Award this year for two of them: “Circle Mirror Transformation,’’ which she wrote in 2008, and “The Aliens,’’ from 2009. “Body Awareness,’’ from 2005, is the third piece in the Shirley, VT Plays Festival, a collaboration between the Huntington Theatre Company, SpeakEasy Stage Company, and Company One.

So what are the other Shirley plays?

“The other three plays have never been produced. I am loath to even tell you their titles,’’ Baker writes, then immediately allows one to slip: “Nocturama,’’ written in 2006, which will be included in a collection of her work to be published next year by Theatre Communications Group. “The other two are unspeakably bad. I will not let any of them be produced.’’

Shirley, a crunchy university town that she describes as “a combination of Amherst and Brattleboro and Putney and Bolinas, California,’’ doesn’t serve the same function for Baker that a common setting serves for a playwright like Alan Ayckbourn, linking plot and characters in separate but overlapping plays intended to be performed together. The Shirley plays share no plot or characters; they aren’t even set in the same parts of town, or necessarily within the same social strata.

“I have no idea what the effect of seeing the plays together in a festival will be on theatergoers,’’ Baker writes. “I’m worried people might be disappointed — like all the old ladies will be in line for the bathroom at intermission yelling ‘WHAT’S THE THEME?’ and desperately consulting their programs for help. It’s not a trilogy. There’s no like special clue or answer you’ll get from seeing all three of them together, besides a sense of what this imaginary town is like.’’

“Circle Mirror Transformation,’’ Baker’s best-known play, stretches over six summer weeks at a community-center drama class. “The Aliens’’ is set on the back patio of a coffee shop, where a couple of thirtyish men, too old to be as directionless as they are, befriend an agonizingly awkward teenager who works there. “Body Awareness’’ takes place during Shirley State’s Body Awareness Week, both at the university and at the home of a professor.

“It wasn’t a conscious decision, setting all six plays in Shirley,’’ Baker explains. “It just kind of happened — I fell in love with this imaginary town and suddenly all these imaginary Shirley residents were crowding into my brain.’’ As for why she situated the town in Vermont, the reason is her fascination with the state: “The remoteness, the beauty, the embracing of diversity and fear of diversity, the good intentions and weird intentions and the old farmers and the old hippies and the new farmers and the new hippies, etc.’’

The plays do have in common a shortage of intact families, fathers who are absent or somehow at a distance from their children, and damaged young men who cling too long to their mothers. There is also a nearly visceral empathy for the pained adolescents and young adults in them: sweet, nerdy, 17-year-old Evan in “The Aliens,’’ described in the script as being “in a constant state of humiliation’’; sad, furtive, 16-year-old Lauren in “Circle Mirror Transformation’’; and scornful, confused, 21-year-old Jared in “Body Awareness,’’ his linguistic expertise no help to him in decoding social signals.

“Well, like most people, I was once very young and very awkward and very much in pain,’’ Baker writes. “There is something particularly horrible about being a teenager, and it’s not addressed in most teen sex comedies — it’s the complete and terrifying lack of control. You’re old enough to realize that all the adults around you are completely crazy and hypocritical and self-destructive, but you’re still completely dependent on them. And you aren’t smart enough yet to realize that one day YOU TOO will become crazy and hypocritical and at least occasionally self-destructive. So the self-righteousness of most young people is fascinating to me. I was a very self-righteous 15-25 year old. Anyway, I wake up every morning and thank God I’m not a kid anymore.’’

Baker has a bachelor’s degree from New York University and a master’s degree from Brooklyn College, where she studied playwriting with Mac Wellman. According to Melia Bensussen, who is directing “Circle Mirror Transformation’’ at the Huntington, the inherent theatricality of Baker’s plays and her ability to capture “the epic in the small gesture’’ are part of the reason she’s found such success.

“For me, the beauty of her writing is her understanding of the importance and poignancy of the moments of our lives: the small moments of basically happy people,’’ Bensussen says. “I think there is a hunger for theater that has an immediacy and a human scale. The characters are human, and their tragedies are of the daily variety.’’

Baker is at work now on two plays, one set in Massachusetts — “Worcester, I think,’’ she says. She traces her affinity for playwriting to the influence of her mother, a professor at Keene State College in New Hampshire, and her father, who directs a charitable foundation in New York.

And the connection there is what?

“Oh, well,’’ she writes, “I was raised by a single psychologist mother and we spent every evening sitting at the kitchen table and dissecting our emotions and speculating about the inner life of everyone we knew. And then when I would visit my dad in New York we would read Oscar Wilde plays out loud on his couch, so I had ‘The Importance of Being Earnest’ pretty much memorized by the time I was 11. Put the two together and you have a playwright.’’

But not a director — at least not for a long while. “I would like to direct one of my plays at some point,’’ Baker allows, “but I think I’ll wait until I’m 50 and I have a long gray braid that reaches my waist. Then I’ll be ready. Right now I’m too young and neurotic and high-strung to be a good director.’’

This despite her experience that “it’s always scary to hand your plays over to people, especially people you don’t know.’’ (Thus those notes she puts in the scripts, which she acknowledges are “really didactic.’’) “And yes, I’m very meticulous with the language in my plays,’’ she writes. “In addition to all the silences, every ‘um’ and ‘ah’ is extremely important. I don’t understand actors and directors who don’t care about delivering the text exactly as it’s written.’’

So. (A pause.) Speaking of those silences . . . why build them into your plays?

“I’m interested in silence because I think it’s a huge unacknowledged part of our daily lives,’’ Baker explains. “And by silence I don’t mean portentous, Pinter-esque silence — although that can be great too — I just mean the absence of talk. It’s not actually silence I’m after so much as the things that we do when we’re not talking. Someone jiggling their knee. Someone staring into the sun for a full minute and humming. Someone flossing alone at night in their bathroom. All of this stuff is absent from most contemporary theater because people are so freaked out about holding the attention of an audience who would rather be at home watching action movies and sitcoms. But as an audience member, there’s something really exciting to me about watching someone scratch their elbow onstage and not say anything. Partly because a lot of audience members get weirdly uncomfortable and tense when that happens. I had no idea you could alienate people so much just by being quiet. Some audience members really start to freak out. And then other people love it. That’s really interesting to me — when half the audience is going crazy and half the audience is enthralled.

“How to put this?’’ she continues. “My plays are often about what happens when we’re not talking. I’m not interested in a bunch of people sitting in a living room talking really fast and being witty and yelling at each other — put that on TV, man. What can we do onstage? Movement. Silence. Stillness, then sudden movement. Interesting stage pictures. The living human organism in front of us, doing strange things.’’