At 77, a photographer with staying power 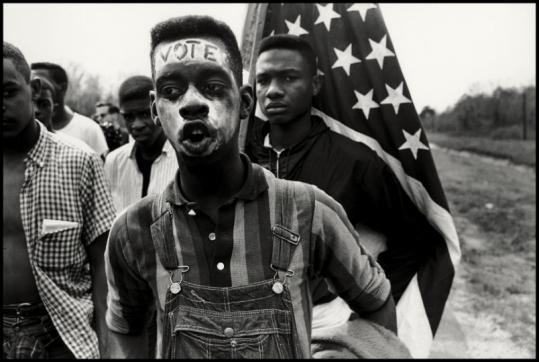 Photography people know very well what Davidson is famous for. In a career that’s spanned more than half a century, he’s shot Marilyn Monroe and the civil rights movement, the building of the Verrazano-Narrows Bridge and the Supremes having a snowball fight. His photo essays on a Brooklyn youth gang in the ’50s, East Harlem in the ’60s, the New York subway system in the ’70s, and New York’s Central Park in the ’90s are classics.

A protege of Henri Cartier-Bresson and longtime member of the legendary agency Magnum Photos, Davidson was the first photographer to win a fellowship from the National Endowment for the Arts. Along with such contemporaries as Diane Arbus and Lee Friedlander, he helped transform documentary photography in the ’60s.

Davidson, 77, laughs when he recalls going to a burlesque show in Atlantic City with Arbus. Rumpled, relaxed, a little roly-poly, he’s Daddy Warbucks bald beneath a baseball cap and as amiable as Annie. He recalls Arbus saying, “You know, Bruce, you’re better when people are not looking at the camera, and I’m better when people are looking at the camera.’’

In a telephone interview, Willis E. Hartshorn, director of the International Center of Photography, calls Davidson “a major contributor to the evolution of photojournalism and documentary photography. He really pioneered a kind of documentation where there was a sincere commitment to getting to know and spend time with his subjects.’’

Davidson has a lot of speaking engagements this fall. He’s in demand because of a lavish three-volume retrospective of his career. “Outside Inside,’’ which includes more than 800 examples of his work, has little competition for the unofficial title of photography book of the year. “Were you able to lift it?’’ Davidson asks a visitor to the Upper West Side apartment where he and his wife, Emily, have lived for more than 40 years.

Spacious and happily cluttered, the apartment doubles as living space and photographic cornucopia. Davidson’s darkroom is off the kitchen. Prints of his photographs hang on most every wall (there’s other art on them, too). A walk-in closet contains his camera equipment. Photography books fill the bookshelves in the study. “Friends send them to me,’’ he says with a shrug, “I guess I’ll give them to a school some day.’’

Then there’s Davidson’s office, where he works with his assistant, Amina Lakhaney. “I’ve found photographers’ minds do not work in an organized manner,’’ she deadpans. Boxes of prints and binders full of contact sheets fill the space. “I bet there are a million images in here on contact sheets,’’ Davidson says. He stops at the single bit of empty shelf space. “I figure I have about this much of my life left,’’ he says, spreading his hands to indicate the available width. “Ten binders, let’s say.’’

Davidson can afford to be blithe on the subject of life expectancy. His 99-year-old mother still lives on her own. When Davidson was 10, she bought him the equipment for a rudimentary darkroom. This was in suburban Chicago. He put up a sign, “Bruce’s Photo Shop.’’ A few years later, his photo of a baby owl won the animal division in the National High School Snapshot Contest. It’s the first image in “Outside Inside.’’

His boyhood love of the mechanics of photography hasn’t left him. “I’d probably be a counterman at B&H Photo,’’ Davidson replies when asked what he’d be doing if he hadn’t become a photographer. “I like the sound of the camera. I like the feel of it. I like the metallic part of it. With Leicas, I like the smallness, the quietness.’’

Davidson’s interest in photography led him to the Rochester Institute of Technology. “We had 148 students,’’ he says. “Two of them were women. I took a liking to one of them. I went over to her dorm on a date. She had this large book, which she took down to show me her true love. It was [Cartier-Bresson’s] ‘The Decisive Moment.’ I thought, ‘Well, if I could take photos like this guy, maybe I could become her true love.’ So she ran off with an English professor, and I was left with the book.’’

A few years later, as a GI in Paris, Davidson sought out the book’s author. Cartier-Bresson praised his work. There was no looking back. He worked freelance for Life magazine and then joined Magnum. What established his reputation was when Esquire ran his photo essay on the Brooklyn gang. There were years of scuffling ahead. Davidson converted the kitchen sink in his one-room Greenwich Village apartment into a developer and put a red safelight bulb in the refrigerator for printing pictures. Sleeping on a mattress on the floor, he subsisted on a diet of “cold chicken and frozen Hershey bars.’’ But Davidson got a Guggenheim Fellowship in 1962, and his photographs of the civil rights movement won widespread praise.

The projects that preceded the gang essay — on the Yale football team, an elderly couple in Arizona, a painter’s widow in Paris, a circus dwarf, the Statue of Liberty, a Leonard Bernstein recording session — give a sense of Davidson’s range.

Change has been one of two constants in Davidson’s career. “There is no typical Davidson photograph or subject,’’ the curator Henry Geldzahler once wrote. Davidson “never returns to the scenes of earlier triumphs.’’

“No, I wasn’t conscious of that,’’ Davidson says when asked about an unwillingness to repeat himself. “In fact, until someone told us that photography was an art we just kept our mouths shut and took our pictures, you know? Now I have students come up to me and I’ll ask, ‘What are you interested in?’ They’ll say, ‘We are fine art photographers.’ I’ll say, that’s good. . . . I may be a fine photographer, but I’m not a fine art photographer. The death of anything is when it begins to be about itself.’’

The other constant has been people. Photography, at its most basic, is a way of looking at and recording the external world. For Davidson, that world is almost always populated. There are some landscapes in his body of work. A current, ongoing project is inhabited only by palm trees and the Hollywood sign (the back of it, actually). “ ‘Nature of Los Angeles’ is more abstract a notion than anything I’ve ever done before,’’ he says. “There are absolutely no people in these pictures. That’s not like the rest of my work. People are shaken by it. They say, ‘Where are the people?’ I could say to them, ‘Later, in Photoshop, we’ve got people.’ But I like it. First of all,’’ he grins, “trees you don’t need to bother with a release.’’

That approach is exception rather than rule for Davidson. “What you end up with,’’ the ICP’s Hartshorn says of his body of work, “is a very intimate, very open view of people and their lives. The other thing that’s extraordinary about him is that he maintains relationships with his subjects.’’

For Davidson, photography has always been a humanistic enterprise as well as an artistic one. You can see it in the pictures. Arbus was wrong: Davidson is equally good when people are looking at the camera. The important thing is that he make a connection with them. Ideally, that connection takes place before, during, and even after the picture is taken. Davidson is notable for attempting to get prints to the subjects of his pictures. “It doesn’t always work,’’ he says, “but I try to. I tried that with ‘Subway’ and ‘East 100th St.’ [the book about East Harlem]. Along with that, I don’t leave my subjects. I’ve kept going up to E. 100th St., for example. My wife is working on a book with one of the Brooklyn gang members. I do stay in touch.’’

Davidson has done his share of celebrity portraiture. He even published a book of them (“Portraits,’’ 1999). Yet the only famous people in “Outside Inside’’ are Monroe, Bernstein, and Isaac Bashevis Singer, a neighbor who became a collaborator and friend. Does Davidson prefer everyday people to the famous? “I only wanted people in here that I felt a connection with,’’ he explains. “Everyday people are famous if they’re in front of my camera. They feel famous. You walk up to someone on the street and say, ‘You look great. Can I take a picture?’ It’s almost like winning the lottery.’’