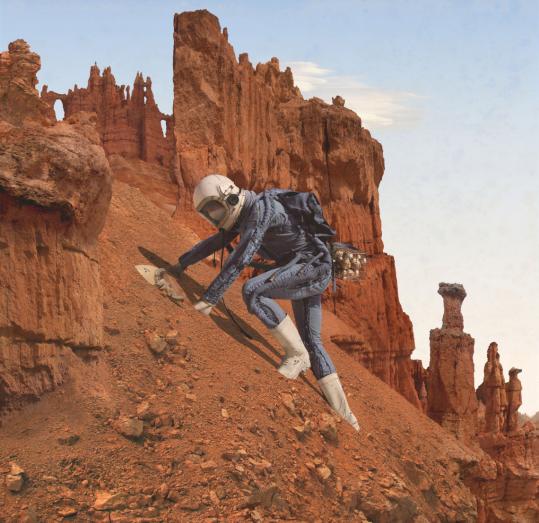 Pink may or may not be the navy blue of India, as Diana Vreeland famously declared. Red is definitely the navy blue of Mars. Or so it would appear from the latest excursion undertaken by the antic expeditionary force that is Nicholas Kahn and Richard Selesnick. Their “Mars: Adrift on the Hourglass Sea’’ runs at Carroll and Sons through Oct. 23.

Photographers and conceptual artists, Kahn and Selesnick work at the visual intersection of what-might-be, you-must-be-kidding, and well-why-not. Previously, they have envisioned Edwardian voyages to the moon (“The Apollo Prophecies’’), a vanished Central Asian capital (“City of Salt’’), a Weimar-era city-state ensconced on a Baltic iceberg (“Eisbergfreistadt’’). These projects manage to be arresting to look at, intriguing to contemplate, gymnastically witty.

“Mars: Adrift on the Hourglass Sea’’ is a meditation on time (the hourglass sea on which the universe floats) and space. That space is Martian, of course — though in the sense it communicates of an inhospitable environment ill treated by former inhabitants it brings to mind a planet much closer to home.

The show consists of one painting, two dozen photographs, eight large sculptures of concrete or concrete and tin, and 50 small pieces of tin and lead. Many of the photographs draw on NASA photo-mosaics assembled from Martian rover images, as well as photographs taken by Kahn and Selesnick in the Nevada and Utah desert.

The prevailing mood is one of ecstatic desolation. The deadpan goofiness often to be found in prior Kahn and Selesnick projects is little evident. “The mind is a machine for creating and upholding context,’’ they have said. The context they provide here is intellectual no less than extraplanetary. In the 18th century, Edmund Burke suggested that “the ruling principle of the sublime’’ is “terror.’’ Here Kahn and Selesnick attempt a contemporary definition of sublimity: consistent unease.

A woman from Earth — a survivor of some apocalyptic event — moves through many of the photographs. More exile than explorer, she inhabits a Mars not so much arrived at as escaped to. No wonder there’s a surpassing sense of sadness whenever we see her.

What she encounters is a very strange environment, indeed. There are geodesic domes, canals (of course), pyramids, obelisks, giant balloons, concrete boats. These are the large sculptures: physically impressive, if nautically unsound. Also visible are curved structures called “Concrete Ears.’’ One of them looks like Mickey Mouse ears attached to a giant alarm clock (another reference to time?).

Despite its name, another “Concrete Ear’’ looks metallic. Imagine a Richard Serra sculpture marooned in the middle of a Martian nowhere. Come to think of it, COR-TEN steel rusts to a complementary shade of russet. The landscape in “Memento Mori’’ manages to be funny and harrowing all at once. It could have migrated from a Max Ernst canvas. “Petrified Ships’’ is like a multiple-vessel variant on Gericault’s “Raft of the Medusa.’’ “The Blue Scorpion,’’ with its melancholy view from behind of a space-suited mother and child facing a vast and threatening dust cloud, recalls Caspar David Friedrich.

Clearly, Kahn and Selesnick know their art history. They know it the way Abbott and Costello knew their baseball players. Who’s on first? Who’s on Mars is more like it. 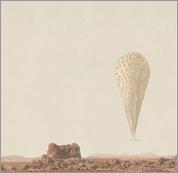 'Mars: Adrift on the Hourglass Sea'