‘Checkout’ holds a moment in balance 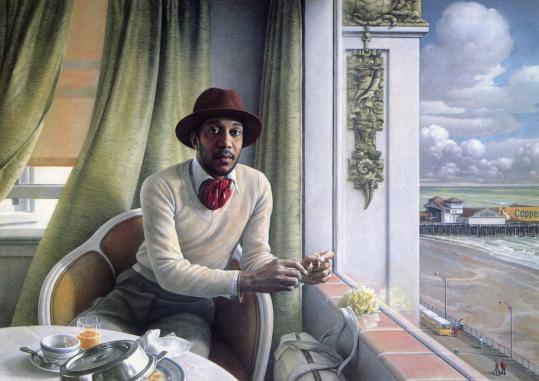 The Marlborough-Blenheim Hotel in Atlantic City was for a time after its construction in 1905-06 the largest reinforced concrete building in the world. Like the building itself, this large-scale pastel portrait by the little-known artist Bradley Phillips is classically balanced and carefully constructed. The artist spread his attention evenly across the entire surface, from the window ledge at the left to the beach, the pier, and the massed white clouds over to the right.

The whole thing could easily be stillborn, an earnestly conventional piece of academic portraiture. But there’s surprising life in it, a sense of this highly refined and scrupulously detailed work being tethered to a very particular, unrepeatable moment. Something poignant escapes from it.

Pastel is not an easy medium. Here, Phillips gives it the scale, the finish, and the grandeur of oil paint while retaining the soft, powdery textures and the warm coloration of pastel. He was born in Buffalo, graduated from Harvard in 1951, and died at 62 in 1991. This picture may have been the best thing he ever made. It usually hangs in relative darkness in a fifth-floor kitchen at the on Beacon Street. But it’s part of the Athenaeum’s permanent collection, and, happily, it has recently been moved from its top-floor hideaway to the Athenaeum’s entrance-level circulation area as part of a broader reinstallation of the collection.

The subject, Alexander Hickson, is shown leaning toward the window of his hotel room, lighting a cigarette — or maybe a joint. It’s 1978. He looks good in his tight white vest, overflowing burgundy cravat, and matching hat — a late-20th-century dandy. In front of him on the table are the tidy remains of his breakfast, while to his left we see his carefully packed, neatly zipped valise. It is, as the title confirms, checkout time.

What makes the picture so compelling?

It’s all to do with time. Notice, for starters, the way the wind catches the curtains behind, adding life and a sense of instantaneity to the scene. Their movement echoes the sideways twist of Hickson’s body, animating all those right angles. The lighted match similarly yanks us into the present.

But what makes the picture haunting is the tension between the subject’s air of casual disregard (it’s checkout time, I’m ready to go, but what’s the hurry?) and the lingering, focused, devastatingly frank way his eyes answer the scrutiny of the artist.

The scene, despite all its wealth of detail, feels strangely empty. Life, it reminds us, is never quite fully realized in hotels, no matter how appealing the artificial world they create (I’m reminded of what V.S. Naipaul said he liked about them: “the temporariness, the mercenary services, the absence of responsibility, the anonymity, the scope for complaint.’’) Sooner or later we have to check out and reenter the reality of real relationships, real life.

When we do, what will happen? There’s a clue in this man’s eyes, but I’m not sure how to interpret it.

At: the Boston Athenaeum