He's got his eyes on the aisles 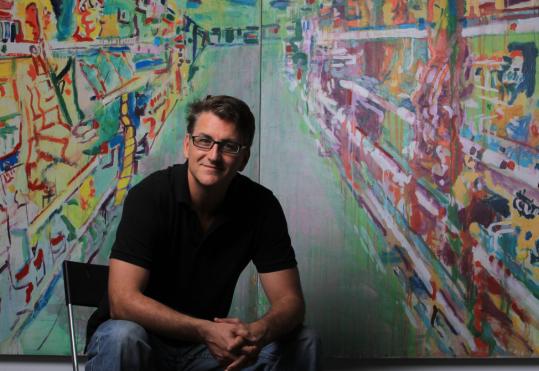 Walmart: a convenient place for inexpensive one-stop shopping, or a corporate behemoth?

Painter Brendan O’Connell has his own take on the mega-store. “It’s the perfect petri dish to try [to] capture beauty,’’ he says. “The place holds an infinite number of color patterns and people’s gestures.’’

The artist has an exhibit at LaMontagne Gallery devoted exclusively to his portrayals of Walmart. Although Walmart has been a lightning rod for criticism of big-box stores and controversial labor practices, O’Connell doesn’t see himself as a political painter or a social commentator. “By no means am I an apologist for Walmart,’’ he says, noting that he has been asked to leave more Walmarts than most people have shopped in. He takes pictures in the stores to base his paintings on, though without permission from the retailer.

“Trying to find beauty in the least-likely environment is kind of a spiritual practice,’’ O’Connell says, casting his eyes over the gallery walls on the afternoon of the show’s opening, earlier this month.

O’Connell’s paintings fit into a long line of Pop Art celebrations of American consumer culture that dates back to Andy Warhol’s soup cans and Wayne Thiebaud’s gumball dispensers, but O’Connell adds an impressionistic twist. His style is painterly; he experiments with translucence, abstraction, and patterning. His delight in color pattern and the bustle of society recalls the work of Impressionists and post-Impressionists such as Pissarro and Seurat, who painted out along the boulevards, parks, and shopping arcades of Paris — where O’Connell has also set up his easel.

“Walmart had the brilliant idea of putting all the boulevards under one roof,’’ O’Connell says. The 42-year-old painter speaks softly, wandering from painting to painting with his hands jammed in jeans pockets. The sheer democracy of the store is awe-inspiring, he says. “In Torrington, Connecticut, at the Walmart there, my mom’s in line, and in front of her is Meryl Streep, and behind her is a woman in a muumuu.’’

O’Connell’s paintings offer a meander through the store like a shopper in search of specials. The ambitious “Snacks,’’ a two-panel piece that’s six feet tall and eight feed wide, shows an empty aisle stretching into the distance, shelves packed with snack foods such as Tostitos, recognizable thanks to O’Connell’s ability to capture branding with the right colors and a few swift gestures. In “Shoes,’’ a woman bends over to fit a shoe on her foot. Again, the painting is bounded by a wall of shelves, which are both energizing and lulling in their repetition.

“I see the environment in a very abstract way,’’ O’Connell says. “Patterns are simplified. There’s something perfect about items on the shelf.’’

O’Connell didn’t go to art school. He didn’t even start to draw until he was 22. After college, he moved in with his parents and found a job in a grocery store. “I had a color epiphany in the cereal aisle,’’ he remembers. Still, he thought of himself as a writer, not an artist.

He took off for Paris intent on writing a novel about abstract painters, and taught himself to paint to better serve his book. “That’s when I digested my epiphany,’’ he says. He abandoned the book. “All the writers I knew were quasi-miserable, and all the painters were having a good time.’’

He lived in Paris for seven years, painting portraits on street corners to make money and making abstract canvases in the studio to satisfy himself. It was on the street there that he met and sold a painting to actor Alec Baldwin, who continues to collect his work, O’Connell says.

Independent curator and critic Joe Fyfe has written about the Walmart paintings, which the artist has exhibited in New York and Shanghai. Fyfe says O’Connell has brought a particularly fresh, anti-academic approach to his collision of high art and popular culture.

As a sidewalk portrait painter, O’Connell “developed an approach to painting we used to think of as kitschy decorative art, almost tourist painting,’’ Fyfe says. But it’s not just O’Connell’s ability to infuse kitsch with talent that makes the Walmart images alluring.

“None of it would have been interesting if they weren’t such idiosyncratic paintings,’’ he says. “[O’Connell’s] colors in relation to the merchandise are oddly sweet and poisonous at the same time.’’

O’Connell says he’s been seeking permission from Walmart for the past three years to work openly in the stores, but hasn’t received it so far. Still, he has hopes.

“The endgame dream is to execute the paintings in the stores,’’ he says with a gleam in his eye. A setup with an easel, a camera, and a printer could result in not only a canvas, but a high-quality print that shoppers could take home. “It would collapse the ideas of the gallery, the studio, and the commercial marketplace. The spectator becomes the subject of the painting, who could also be the consumer of the print.’’