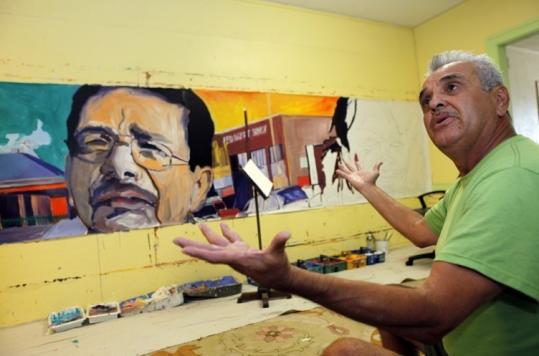 Ernesto de la Loza, sitting in his studio in the Echo Park area of Los Angeles, bemoans the fact that so many of his murals have disappeared. His artwork depicts Angeleno life. (Damian Dovargane/ Associated Press)
By Christina Hoag Associated Press / September 19, 2010

LOS ANGELES — Every so often, Ernesto de la Loza drives around the city to check on the state of his murals. It’s a short tour these days. Out of 42 vivid pieces he has painted, only seven remain, the rest lost to graffiti, whitewash, and withering sun.

At one time hosting an estimated 1,500 pieces of wall art, Los Angeles is the nation’s mural capital, but that’s a fading distinction thanks to prolific graffiti taggers, a legal morass over classifying the artworks as illegal signs, and neglect.

“I never thought 30 years ago that I would have to save works from being destroyed,’’ said muralist Judith Baca, an art professor at the University of California, Los Angeles and founder-artistic director of the Social and Public Art Resource Center, which promotes and protects murals. “We’ve had to defend one piece after another.’’

Spawned in the ’70s on the city’s eastside, LA’s murals form a kaleidoscope of color and imagery in a city known for bland urban sprawl. Decorating unlikely swaths of concrete ranging from housing projects to freeway underpasses, some are so massive they are best viewed blocks away, while others are easily digested in a drive-by glance.

They pay homage to celebrities — Anthony Quinn as “Zorba the Greek’’ towers over a downtown parking lot, Steve McQueen stares out from the side of a house. Some celebrate civic milestones such as the 1984 Olympics or institutions like the Los Angeles Chamber Orchestra. The mother of all, Baca’s “The Great Wall of Los Angeles,’’ is a half-mile stretch of California history along a San Fernando Valley drainage canal.

Others are displays of immigrant pride and ethnic history or abstract visions and palettes of pop art blanketing the sides of corner stores and businesses in blue-collar neighborhoods. “They’re a reflection of us and who we are as a city,’’ said Pat Gomez, the city’s murals manager.

Most of the murals — some 1,100 — are located on private property, while 400, created as part of the city’s mural program that ended in 2006 in a municipal budget crunch, are mostly on public land.

The exact number of lost murals is hard to determine. Baca’s group inventoried a sample of 105 city-sponsored works, and found 60 percent had vanished. Baca said they’re disappearing with increasing frequency since the mural program, which included maintenance, died. The city plans to do its own survey, Gomez said.

Graffiti is blamed as the biggest culprit.

Murals are often targeted by vandals because the city does not regularly remove tags from murals so the spray-paint scrawls remain indefinitely. Blank walls are easier to clean and are whitewashed by city workers within days.

In the case of private property, the city requires the owner to remove the graffiti or face a fine. Sometimes, the owner removes the mural, too, to avoid repeated citations.

About 60 murals face removal or daily fines under the city sign code because they do not conform to size and location rules governing signs. But a proposed ordinance would change that by issuing permits for murals and requiring them to be protected with an anti-graffiti coating.