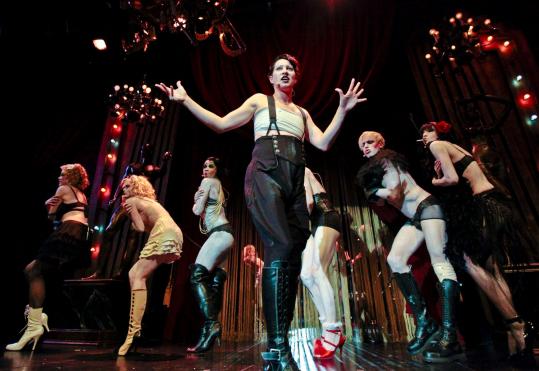 While her performance doesn’t register much at first, by the end of Act 1, Amanda Palmer (center) as the Emcee, gains confidence and asserts herself more. (Marcus Stern)
By Don Aucoin Globe Staff / September 10, 2010

CAMBRIDGE — Chances are a lot of people will flock to see American Repertory Theater’s “Cabaret’’ simply because rock singer Amanda Palmer is starring in it.

But they might be surprised to discover that the best reasons to see this innovative and engrossing “Cabaret’’ have less to do with Palmer than with an impressive pair of newcomers and an old ART hand.

Director Steven Bogart, a drama teacher at Lexington High School who once counted Palmer among his students, makes his regional theater debut with a visually inventive and emotionally powerful production that more than justifies Palmer’s faith in her mentor.

Bogart obscures the clunkiness of Joe Masteroff’s book (always a problem with “Cabaret’’) by creating a swirl of constant motion. In a mostly successful bid to evoke the Kit Kat Klub, the decadent 1930s Berlin nightclub that is the primary setting of “Cabaret,’’ Bogart has his performers scurry and slither into the corners and on top of the railings and tables inside Oberon, the club the ART uses as a second stage.

For the finale, Bogart creates a chilling tableau that gives concrete form to the horror — the Nazi concentration camps — that has been looming over “Cabaret’’ the entire evening.

The other newcomer who will have audiences buzzing is Aly Trasher, who finds new layers in the character of Sally Bowles, the ambitious singer whose veneer of worldliness conceals a childlike innocence.

Trasher nails “Don’t Tell Mama’’ and “Mein Herr’’ in Act 1, and then, near the end of Act 2, delivers a riveting rendition of the title song. Her hair wet and bedraggled and her face ashen, she turns it into a dispatch from the edge of desperation that contains not a trace of the triumphalism associated with Liza Minnelli’s version. (Full disclosure: Trasher’s mother is a hometown acquaintance.)

The ART veteran who reminds us yet again of the depth of his talent is Thomas Derrah. He turns what might have been a mere stunt — he plays Fraulein Schneider, Sally’s landlady — into a performance of genuine poignancy.

In addition to Derrah, other ART veterans also acquit themselves well, including Remo Airaldi as Herr Schultz, Fraulein Schneider’s Jewish fiancé, and Jeremy Geidt, as Max, the owner of the Kit Kat Klub. Max leads the audience in a drinking song before “Cabaret’’ begins, in what one assumes is Bogart’s attempt to get the audience to stop thinking of itself as spectators at a play, but rather as patrons in a club.

Capable supporting work is turned in by Matt Wood as Cliff Bradshaw, the American would-be writer who falls in love with Sally, and David Costa as Ernst Ludwig, the businessman who suddenly begins wearing a swastika armband.

And Palmer? Her presence as the decadent Emcee of the Kit Kat Klub doesn’t register much at first. It’s as if she’s feeling her way through the role, not quite sure how her signature brand of hypnotic cool can be recalibrated for Kander and Ebb’s musical. And of course it’s hard (for her and for audiences) to escape the memory of Joel Grey, who turned the Emcee into the role of a lifetime with a creepily magnetic performance on Broadway and in Bob Fosse’s 1972 film version.

Yet in a way, Palmer has spent much of her career preparing to play the Emcee. As half of the “punk cabaret’’ duo The Dresden Dolls and as a solo act, she has crafted a persona whose challenging theatricality and obvious enjoyment in messing with an audience’s heads dovetails with that of the Emcee.

By the end of Act 1, as the Emcee’s larking and leering turns into something darker, Palmer seems to gain confidence and begins to assert herself more fully. But her best move may have been her suggestion to ART artistic director Diane Paulus that Bogart direct this production.

There’s no danger that “Cabaret’’ will ever be mistaken for one of the ultra-wholesome warhorses — “Oklahoma!,’’ say, or “The Sound of Music’’ — but it’s an awfully familiar show by now, and its shock value has been drained by a zillion music videos that borrow from the visual tropes Fosse created in the film.

Yet Bogart finds ways to jolt and surprise. When Palmer sings “If You Could See Her,’’ for example, it is to a chorine wearing a pig’s mask, and she eats from a receptacle marked “Slop.’’ When the mask is removed after the Emcee’s hissing line, “If you could see her through my eyes/She wouldn’t look Jewish at all!’’ we see that the chorine’s face is battered and bruised.

Bogart stages the ominous “Tomorrow Belongs to Me,’’ with its clear intimations of Nazi ascendancy, as a song sung in a trance. It’s an effective moment — one of many eye-opening ones in this memorable production.