Frame it for young eyes 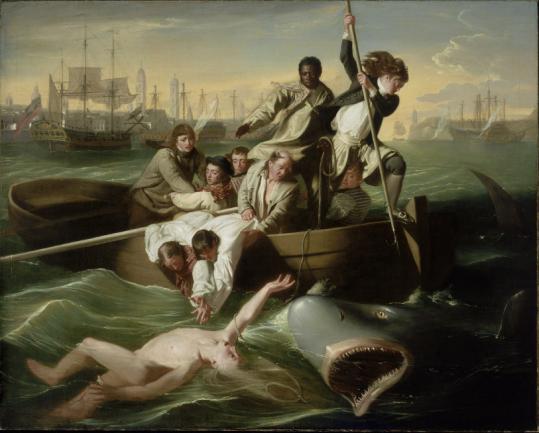 Museums, it’s easy to forget, were once for adults. High-ceilinged places with a muffled, whispery ambience, punctured sporadically by the echoing clack of adult shoes, they were ideally suited to illicit rendezvous on rainy days or courtly, courtesy-filled outings for retirees.

Now, every museum this side of Tbilisi sees it as central to its “mission’’ to function as a kind of day care for kids and a crutch for desperate dads and moms hoping to kill a few hours and provide — against all odds — something culturally edifying into the bargain.

Well, I’ve done my fair share of it, too — but, up until recently, almost never willingly. Exposing one’s children to great art in great museums is all very well for most people. But for me, a professional art critic, I’ve long suspected it’s the dumbest mistake in the book.

Mine are only 5 and 3, but already I can see the writing on the wall. “My old man was an art critic,’’ I can hear my son yelling from the top of the fireman’s pole as his crew gears up to respond to a shrieking fire alarm at the Museum of Fine Arts. “I spent my whole childhood being dragged through museums. Let the damn place burn!’’

If my -wearing kids have ended up on the squeaky, unyielding floors of an art gallery, it’s always been incidental to my job — a sort of logistical inevitability (shows to review out in the Berkshires, wife suggests making a weekend trip of it, can’t in good conscience ask visiting grandmother to stay behind and baby-sit).

There are exceptions: It’s always good, for instance, to take the kids to the Massachusetts Museum of Contemporary Art in North Adams, the Norman Rockwell Museum in Stockbridge, the Institute of Contemporary Art in Boston, or the DeCordova Sculpture Park + Museum in Lincoln. These places are virtually designed for families, and visiting them, as my family does frequently, is almost always a pleasure, irrespective of the art (which, mind you, is usually very stimulating at all four places).

Still, as a general principle, making every effort not to take the kids has always seemed like common sense. One, I don’t want my kids to hate me. Two, I don’t particularly want my kids to hate art (although I can live with that if they’re good at putting out fires or rescuing oil-drenched birds, or even, hey, banking). And three, I don’t want to hate my kids: After all, when contemplating Titian’s “Danaë,’’ who wants to be tut-tutting the children, telling them not to touch, not to run, not to blow raspberries on her belly button or point and giggle at her “crazy little boobies.’’ It’s really a waste of everyone’s time.

But of course, eventually, they become curious. Or for whatever reason you’re forced to take them. Or you have one of those starry-eyed, idealistic half-hours when it seems “the right thing to do’’ to expose your children to one of the things you love, which is also their cultural inheritance no less — and anyway, what else is in the cards today?

Sketching out a trip
What, then, is the best way to approach it?

All sorts of people have strong ideas about this. It depends, ultimately, on the ages and temperaments of one’s children. I know a mom and dad who regularly take their gorgeous, sweet-tempered 3-year-old to the MFA with some paper and pencils. She chooses a painting or sculpture and gets down to drawing. It’s a calm, quiet, unharried experience.

It’s obviously more difficult with boisterous kids. And if taking two is generally tougher than one, three is, for many skittish parents, inviting catastrophe.

So what to do? The MFA, you’ll be reassured to hear, has its own ideas. It has produced a little brochure designed for parents, called “The MFA through the eyes of a child: A visiting guide for families,’’ which includes a section called “Tips for parents.’’ In it you’ll find sensible-sounding advice about wandering aimlessly through galleries to discover art that you and your children are drawn to. You’ll also find the respectful suggestion that you “resist telling children what you know.’’

This, we’re told, is because “when you allow them to have their own experiences, it encourages them to find out more on their own.’’

I’ve had some time to contemplate this, and although I’m sympathetic to the thinking behind the advice, I disagree with it. “Allowing them to have their own experience’’ sounds to me suspiciously close to “keeping them in the dark.’’

Now, I’m not for a minute suggesting that we all subject our 3-year-olds to ad hoc lectures on the ins and outs of, say, “Cubist space’’ or “Courbet and the Commune.’’ But the reality is that a lot of fantastic pictures in museums can look very boring and old-fashioned or simply empty to the uninformed eye. They can suddenly come to life with a fact or two — or even just an informed speculation or two.

Why not mention, in front of the MFA’s van Gogh portrait of Augustine Roulin, for instance, that the rope in her hand is being used to rock the cradle, which is actually out of sight. Why not mention that “La Berceuse’’ means “The Lullaby’’ but also “She who rocks the cradle,’’ and that this restful picture was painted just after van Gogh had a period of feeling so tormented, so overexcited, and so upset that he cut off his ear? Why not even mention the cliche (it’s true, after all), that van Gogh is one of the most beloved artists in the world today, but in his lifetime, he couldn’t seem to get anyone to take his pictures seriously?

Why not, in other words, trust that one or two snippets of information will actually arouse a child’s curiosity rather than shut it down?

I admit, it all comes down to how knowledge is conveyed. There’s nothing worse than being subjected to a boor who won’t stop droning on about everything he thinks he knows.

But the idea that knowledge is somehow an enemy of aesthetic experience, or of curiosity, seems to me rather sinister. I’m all for allowing kids to “have their own experiences.’’ But those experiences can be made deeper and more stimulating if kids are judiciously armed with one or two bits of knowledge. After all, the two are not mutually exclusive. And there’s nothing like knowing a thing or two to make you conscious of how much more you don’t know.

Artful execution
Rashly abandoning my own policy of keeping museums and children safely apart, I recently ventured with my wife and kids to the MFA.

The trip was the direct consequence of one of those starry-eyed moments. The night before, at bedtime, our little girl had randomly plucked from the bookshelves Jacqueline Preiss Weitzman’s “You Can’t Take a Balloon Into the Museum of Fine Arts.’’ (This is the kind of present your children get if you’re an art critic. See what they’re up against?) The book, which ties together the sites of Boston with famous pictures in the museum, is rather silly. But our young cubs were heartily enjoying it, so I found myself saying, “Would you like us to go the Museum of Fine Arts tomorrow?’’

The next morning, off we went.

We kept it short, we kept it sweet. We were in and out in an hour. But in that time, we saw an awful lot, from the extraordinary lutes and zithers in the musical instruments gallery to Copley’s “Watson and the Shark’’ and some mouth-wateringly yummy still lifes by Luis Meléndez. We ventured into the darkened gallery with the giant Buddhas, passed by an Indian stone sculpture of Ganesh, peered at Gerrit Dou’s stunning “Dog at Rest’’ and at Velázquez’s infant prince with a dwarf.

We tore through the building. Since I know my way around, and since I had my own ideas about things they might like, I was leading the charge. But the kids looked for as long as they liked, and they seemed eager to be led. I mostly kept my mouth shut, but if I could think of something interesting to tell them about what we were looking at, I told them.

It all went smashingly well. Indeed, it was one of those rare, unmitigated parental successes, where you both get home, plant the kids in front of the TV, and go back over the morning’s events together, smirking and vigorously patting each other on the back. I’d recommend it. 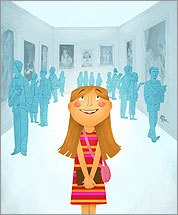