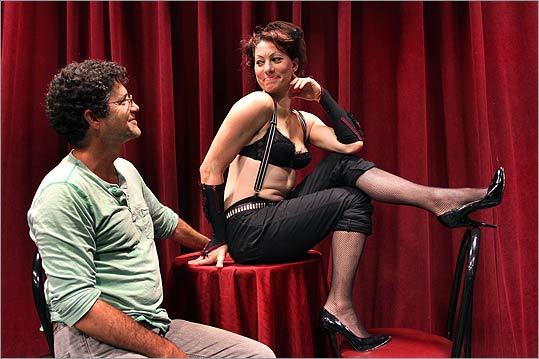 The strangest thing about Amanda Palmer’s fierce and ongoing attachment to her high school experience — the bluster about the glory days, the detailed recollections of adolescent triumphs and defeats — is that it wouldn’t be strange at all if she were someone whose life had gone nowhere since then: if she were an ex-quarterback, say, who had long ago grown a beer belly and gotten stuck in a dead-end job.

But in the 16 years since her graduation from Lexington High School, Palmer has built an international fan base as half of the musical duo the Dresden Dolls and more recently as a solo artist. On a recent sun-drenched walk across Harvard Square, where she used to busk, and where some of her fellow buskers toil still, the memory prompted her to volunteer that she likes her current job better.

“Being Amanda Palmer!’’ she replied, without hesitation. “It’s awesome.’’

Part of the awesomeness, she explained over a midday breakfast at a cafe before heading to rehearsal at the American Repertory Theater’s Oberon stage, is that she’s not so famous that it forces her to live in a protective bubble, the way a mega-celebrity like Lady Gaga has to.

“I’m in that beautiful sweet spot, being famous enough to use it to my advantage and do projects that I want and make a living, have my ego gratified when I need it,’’ she said. “But on the other hand, I can go where I want, do what I want, say what I want, work how I want, and not have to worry about keeping everyone over there ’cause it’s not safe.’’

She’s famous enough, in other words, that when ART artistic director Diane Paulus told her last season that she’d like her to do a project at Oberon, Palmer got to pick not just the project but the director. She chose the man at the center of many of her fondest Lexington High School memories: her mentor, Steven Bogart, who taught her to make theater, who defended the teenage Palmer when she needed defending, who encouraged her to take creative risks. Now she’s prodded him to take one of his own, venturing out of the safety of the high school to make his regional theater debut at age 56, directing Kander and Ebb’s “Cabaret,’’ starring Palmer as the Emcee.

“You know, when I was preparing for this, I was thinking, ‘Oh, I’m coming into a professional theater setting with, like, “the best,’’ and I’d better approach this “the right way,’’ ’ ’’ the soft-spoken Bogart said, sipping iced tea in an ART rehearsal space and making air quotes with his fingers. “And I was struggling with that. And then I thought, ‘Wait a second. What’s “the right way’’?’ I have to approach this the way my instincts say is for me the strongest way to approach a theater piece with people. And it’s the way I’ve been doing it for years with my students.’’

His collaborative way of working — much influenced by Jerzy Grotowski’s experiments in paratheater, in which process is principal, as well as by Japanese butoh — is what Palmer longed for the last (and first) time she performed at the ART, during the 2006-07 season, in a Günter Grass-inspired, company-created piece called “The Onion Cellar.’’ Palmer has described her ART debut in various ways, perhaps most vividly on her blog when she called it a “nightmare,’’ using a modifier that can’t be printed here but of which she is so fond that she employs it as a sort of adopted middle name: Amanda [word we can’t say] Palmer.

On that outing, too, she was allowed to pick the project, but the ART paired her with director Marcus Stern, whose methods and aesthetic — much to her surprise — were unlike Bogart’s. Her preference for messiness and Stern’s for neatness meant that they “were completely mismatched: because he wanted more of a presentation and I wanted more of a catastrophe,’’ she said.

“I certainly can’t hold that against Marcus Stern. I mostly hold it against myself for being so naive as to think that any theater director would love a certain kind of process or want to follow a certain kind of path. But that’s a very naive way of thinking. Obviously.’’ One big lesson she drew: “Don’t take people like Steve Bogart for granted. What he’s got and what he does isn’t normal and isn’t everywhere.’’

What he does certainly isn’t standard in high school theater. A piece he and Palmer created with the Lexington students last year is illustrative: Titled “With the Needle That Sings in Her Heart,’’ it blended the music of the Neutral Milk Hotel album “In the Aeroplane Over the Sea’’ into a fantastical nightmare scenario involving Anne Frank at Bergen-Belsen.

“Cats,’’ then, is not exactly Bogart’s cup of tea. His 2001 production of “Cabaret’’ at Lexington, which ignited Palmer’s desire that she and Bogart mount their own production, was infused with Egon Schiele — an inspiration that came to him when he was visiting a palace museum in Vienna. Even when Bogart did “Seussical,’’ it was a dark vision, with the Whos as survivors of Hurricane Katrina.

It’s based on work like this that Palmer champions her former teacher, a visual artist as well as a theater artist who has a bachelor’s degree from the School of the Museum of Fine Arts and Tufts University and a pair of master’s degrees: in theater, from Emerson College, and creative writing, from the University of New Orleans. But that Paulus took a leap of faith in hiring him, without even meeting him first, is not lost on Bogart.

“I don’t know where that trust came from,’’ he said. “But maybe it’s just the way she is, that she’s willing to take those kinds of risks. I mean, it’s not a risk to have Amanda Palmer in a show in Boston in terms of filling seats. But it is a risk to bring in a director [when] you have no idea what they can do. I think that’s a risk.’’

Asked about this, Paulus said through a spokesperson: “Any show has its share of risks. One of the biggest challenges is to put together a team that will work well together. Amanda has worked with Steve in the past, so there was a history there. Their joint vision for the project was extremely strong. It was clear that Steve would be the right director for Amanda.’’

For both Bogart and Palmer, collaborative mess and inventiveness are so central to the experience that they’re part of the point. The opportunity for inventiveness, in fact, is the reason Palmer chose the role of the Emcee, with its myriad improvisational moments, over the tantalizing role of Sally Bowles, a character who she said “basically is my id. Her whole, like, lust for attention and all that, it’s so close to home. The desire to be mindless and all of that strikes a nerve.’’

But, Bogart explained, there is a philosophy, and a design, driving the untidiness in rehearsal. “I think one of the reasons why the messy process is important to me is because it gives permission to everybody,’’ he said, recalling a time when he had a strict, traditional teacher who frequently squelched his creative impulses. It’s something he sees too often in the schools and in the arts. “We say, ‘No, you can’t think that way.’ Or ‘Oh, I don’t like that idea. You can’t do that.’ ‘Oh, that’s really dark. We’d better take you down to the guidance counselor because you shouldn’t be thinking about this.’ ’’

In his view, professionals making theater need that kind of creative permission just as much as students do. And in Palmer’s view, the fact that Bogart has been making amateur theater with kids for years has nothing to do with his ability to direct on a more prominent stage.

“You know, I have seen so much so-called professional theater that was so . . . terrible, and most of the shows that I’ve seen Steve Bogart produce at the high school have blown away $500,000 productions that I’ve seen in real theaters,’’ she said. “I just don’t buy any of it. But it’s the same thing, [in music], I mean. I’ve gone and seen mainstream pop acts that touched me in no way possible, and I’ve seen fringe shows that had budgets of $500 that changed my life.’’

Clarification: The main headline of this story did not intend to suggest that the relationship between Amanda Palmer, who stars in the show, and Steven Bogart, her former drama teacher and mentor at Lexington High School, who is directing the production, was anything but professional. As a second headline and the story itself made clear, Palmer sought Bogart to direct the musical because she admired his professional abilities.