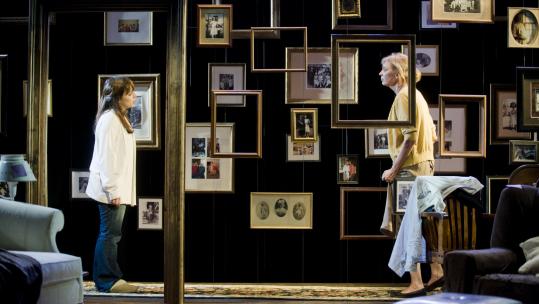 PITTSFIELD — The exhaustion, the heartbreak, and the piercingly sharp humor in “The Memory Show’’ will all be familiar to anyone who has cared for an aging, and failing, parent. The story might seem familiar to such parents, too, if only they could remember.

It’s one mother’s loss of memory, and the different kinds of loss that her daughter experiences as a result, that form the story and the theme for this new musical — and if you’re thinking that Alzheimer’s makes a pretty unlikely premise for a musical, you’re not alone. But as the premiere production at Barrington Stage Company’s admirable Musical Theatre Lab makes clear, “The Memory Show’’ is emotionally sophisticated and dramatically astute enough to make it work more persuasively than you’d expect.

Sara Cooper, who wrote the book and lyrics, and Zach Redler, who composed the music, met in the graduate musical theater writing program at New York University’s Tisch School of the Arts; this is their first musical. Their youth and relative inexperience sometimes shows — the structure of the show never clarifies how much time it encompasses, for example, and the mother, at 61, is a bit young for typical Alzheimer’s — and yet the emotional shadings of the relationship between mother and daughter are remarkably believable and complex.

The two characters — they’re identified only as Mother and Daughter — are both onstage for all 80 minutes of the intermissionless show, though the focus shifts from one to the other and then to the two of them together, then back again to a solo. Daughter, played with solidly grounded good humor and wry self-awareness by Leslie Kritzer, has moved back into her mother’s Brighton Beach apartment after the Alzheimer’s diagnosis. Mother, in Catherine Cox’s wonderfully layered and slowly unraveling portrayal, starts in denial of her condition and only intermittently seems to grasp the reality of it — another trait that strikes a familiar chord for those touched by the disease.

One element that removes any trace of treacle from the story is Mother’s strikingly difficult personality — and, even more, the late revelation of the family secret that rewrites both Daughter’s and our understanding of that prickliness. We sense instantly that this woman was never easy to live with, and that the disease won’t make her any easier. By the end, though, both we and her child feel more compassion, and more understanding, than we ever would have expected at the outset.

Cooper’s lyrics do most of the storytelling work; the songs are linked together by short passages of dialogue that feel more like vignettes than like fully fledged scenes. Fortunately, she has a gift for clever, compressed narration and vivid metaphor — a gift that occasionally leads her into pushing a metaphor too far, as when Daughter calls herself the apple and her mother the tree (fine so far) but then wonders why their relationship is fruitless. It would work better if we were left to make that sort of association for ourselves.

Another difficulty, of course, is that Mother is called upon to sing some dazzlingly articulate lyrics even as she slides further into dementia. The character can’t remember simple nouns, but the performer must put across sophisticated songs about this failing; the contradiction sometimes pulls us out of the emotional truth of the situation. Cooper does sometimes find ways to play with this problem, as in “Memory Like an Elephant,’’ when Mother slides into speaking of her “emory like a melophant,’’ and that helps.

It also helps that Mother’s songs, both lyrically and musically, become looser and less connected as the show goes on. Redler’s score, though it does not contain a lot of individually memorable melodies, finds sadly beautiful ways to echo the verbal deterioration of Mother’s mental state. It’s as if she’s losing the thread both of her thoughts and of the songs, and it’s painfully lovely to hear.

The show is clearly still in a developmental stage; some of the transitions from dialogue to song feel a bit rough, and a clearer sense of time passing — or, perhaps, a clearer sense that the creators want to evoke the dreadful experience of being trapped in a timeless world of deterioration and loss — would help to anchor the story. What’s striking, however, is what’s already in place: strong and engaging characters, emotional richness, and a sense of how to tell stories and why.

You should forgive the expression, but it’s a show you won’t soon forget.

Musical with music by Zach Redler, book and lyrics by Sara Cooper