In dinner-theater spoof, an avant-garde troupe takes over a roadside eatery 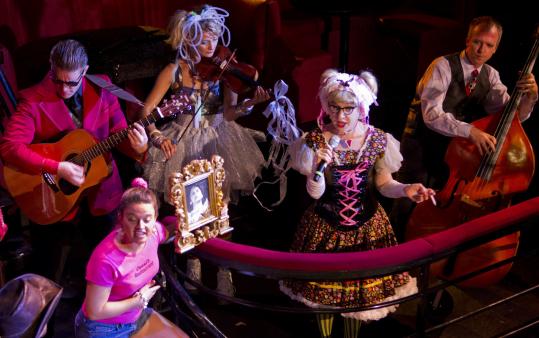 In “Conni’s Avant Garde Restaurant,’’ the actors not only prepare and serve meals, they also put on a show. (Kayana Szymczak for The Boston Globe)
By Don Aucoin Globe Staff / July 23, 2010

CAMBRIDGE — Chances are you’ve seen, heard of, or desperately tried to avoid shows with names like “Tony n’ Tina’s Wedding.’’

The result is a knowing spoof of both styles that makes for an entertaining, if overlong, evening at Oberon, a club on the outskirts of Harvard Square.

The conceit behind “Conni’s Avant Garde Restaurant’’ is that an avant-garde theater troupe has somehow been put in charge of running a roadside restaurant. Idealists all, the actors are determined to fill not just the bellies but also the souls of their patrons. So as they prepare and serve a modest but tasty meal, they also put on a show — but not before one of the characters makes one thing very clear to the audience: “This is not dinner theater.’’

Oh, yeah? Then what’s with those passionate renditions of Styx’s “Come Sail Away’’ and Earth, Wind and Fire’s “Shining Star’’?

But they are artists, you see. Would dinner theater feature a character introduced as the “right-hand dramaturg’’ of Conni Convergence, the absent owner and impresario? Would dinner theater be interrupted by a naked man running through the restaurant, or ask us to contemplate a character who reclines on a bar, reading one of Willy Loman’s most heartfelt passages from “Death of a Salesman’’ while flanked by guys dressed as a bee, a bear, and a dog?

Why, this ensemble is so consumed with lofty cultural purpose that its members even perform a stylized ballet while delivering the salad course.

The evening’s emcee goes by the name of Muffin Character Hanshake (Rachel Benbow Murdy), and her avant-garde credentials are impeccable: Back in the day she used to do “urination paintings’’ with Andy Warhol, and she once performed “The Divine Comedy’’ without vowels.

(Watching from a nearby table at the performance I attended was a singer with a few avant-garde credentials of her own: Amanda Palmer, who will play the emcee in an upcoming American Repertory Theater production of “Cabaret’’ at Oberon.

Muffin squabbles with her egomaniacal brother, named Peter’s Character (Peter Lettre), a prototypical legend in his own mind (he claims to be one of the original von Trapp children, inexplicably left out of “The Sound of Music’’) who frequently seems bent on upstaging his sister.

But others keep jostling for their share of the limelight. There is Redman #2 (Justin Badger), a too-cool-for-school dude in a burgundy jacket and sunglasses who speaks only in murmurs until he suddenly erupts into a scorching, swoon-inducing serenade to a female patron. There is Sue James (Connie Hall), who patrols the dining room and rides herd on the flamboyant theater types while also keeping a lid on the glowering chef, Jonny Hammersticks (Jesse Gustafson), who seems to have anger management issues.

There is Dr. Smith (Peter Richards), whose medical training somehow authorizes him to hand out mysterious pink cocktails during what he calls the “Gintermission.’’ There is Lady Crimson (Stephanie Dodd), who performs aerial acrobatics while suspended from a silk rope. And then there is my personal favorite, Mrs. Robinson (Jeffrey Fracé), who resembles an inebriated Austin Powers as he lurches from table to table, and who informed our group that loneliness was the key ingredient of the fruit salad he was about to prepare for us.

“I’m suffering for you,’’ he told us soberly. “When I make my lonely fruit salad, I want you to know how lonely I am.’’

Members of the ensemble collaborate in the writing and direction of “Conni’s Avant Garde Restaurant,’’ the name of both the show and the theater troupe, which is based at the Bushwick Starr, a performance venue in Brooklyn. According to press materials, “Restaurant’’ originated when the troupe was performing “As You Like It’’ at the Stonington Opera House in Maine four years ago. Spotting a sign for an abandoned diner called “Conni’s Restaurant,’’ the actors indulged in fantasies about buying it, wondering what it would be like for an experimental theater company like theirs to run a roadside eatery. Instead, they decided to create a theater piece built around that concept.

The plot, such as it is, involves the aging Muffin Character Hanshake’s desperation to get pregnant — “Motherhood: It’s the show that never closes,’’ she explains — and, once she is pregnant, the biologically dubious transfer of that pregnancy to a winsome, All-American lass named Goodi Two Shoes (Kelly Hayes).

Both the original impregnation and the transfer are cleverly staged, as are several of the set pieces. That, along with the energetic performances, helps compensate for the hit-or-miss quality of the jokes. A final soliloquy from Muffin goes on too long and helps push the show to the 3 1/2-hour mark, but she does offer an explanation that brings clarity to the evening, and maybe to an entire style of theater.

You see, she explains, the riffs and conceptual routines we have been watching do not really qualify as avant-garde at all. No, she says, “We served them up as avant-garde because they are incomprehensible.’’

Written and directed by the ensemble