Not necessarily happily ever after 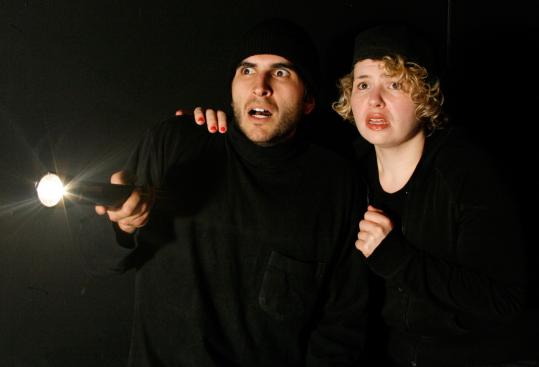 Mason Sand and Nicole Prefontaine in “Half Handsome and Regrettable,’’ Marcus Gardley’s reimagining of “Hansel and Gretel.’’ (Company One)
By Don Aucoin Globe Staff / July 20, 2010

Why do Grimm’s fairy tales continue to resonate long after the spell they cast in childhood has seemingly given way to adult cynicism, “Shrek’’-style satire, and empirical data suggesting the statistical unlikelihood of happily ever after?

Perhaps it’s because the tales, for all their preposterousness, touch on something so primal that there is a part of them that stays with us.

In his landmark book “The Uses of Enchantment,’’ Bruno Bettelheim pointed out that the typical fairy tale “confronts the child squarely with the basic human predicaments’’: namely, the existence of evil in the world and the bedrock fact that “a struggle against severe difficulties is unavoidable, is an intrinsic part of human existence.’’ The meaning of life, Bettelheim suggested, is found in our battles to cope with those challenges.

The challenges facing the characters in “Grimm,’’ Company One’s lively new stage adaptation of some of the tales by the Brothers Grimm, are as different as the battery of seven Boston-area playwrights who mobilized their talents for this ambitious undertaking: Gregory Maguire, Lydia R. Diamond, Kirsten Greenidge, Melinda Lopez, Marcus Gardley, John Kuntz, and John ADEkoje.

Alternately serious, silly, creepy, soulful, and surreal, the short plays in “Grimm’’ never reach the profound depths of Stephen Sondheim’s reimagining of the fairy tales, “Into the Woods’’ (recently given a first-rate production by the Reagle Music Theatre in Waltham).

But “Grimm’’ works, for the most part, as a showcase of seven distinctive voices who add a contemporary flavor to the tales that underscores their enduring potency — for good and for ill.

(While the playwrights are ostensibly the stars of this evening, the cast acquits itself quite nicely, with especially indelible performances from Tasia A. Jones, Lonnie McAdoo, Nicole Prefontaine, Becca A. Lewis, Molly Kimmerling, Keith Mascoll, and Kris Sidberry).

The frame for “Grimm’’ is supplied by Maguire, of “Wicked’’ fame, whose “The Seven Stage a Comeback’’ opens Acts 1 and 2 and delivers the poignant final moments.

Whereas “Wicked’’ imagined the lives of the Good Witch and the Wicked Witch in Oz before Dorothy entered the picture, “The Seven Stage a Comeback’’ presents the forlorn spectacle of the seven dwarfs after Snow White has embarked on a new life with her prince (leaving behind the poison apple and the glass coffin).

No more hi-ho for this despondent crew. The dwarfs feel utterly lost without the onetime center of their existence. “She stole our laughter,’’ one laments. So they head out on an expedition to bring Snow White back home, and thus restore a sense of purpose to their days.

But as the “stole our laughter’’ line suggests, their feelings about Snow White shift during that journey, from abject longing to an angry sense of betrayal, before resolving into a lovely scene of reconciliation.

In “The White Bride and the Black Bride,’’ Diamond takes a deceptively simple approach. Three actresses dressed as schoolgirls sit on stools facing the audience as they read Grimm’s tale, in which God appears in the guise of a poor man and asks for help from a woman, her daughter, and her stepdaughters.

The mother and the daughter treat the man with cold contempt, and for that, are made “black as night and ugly as sin . . . black as coal and ugly.’’ The stepdaughter treats the man kindly, and is rewarded by being made “white and beautiful.’’

When spoken by Jones, who is African-American, such lines furnish a pointed reminder of the pernicious assumptions about race and beauty that underlie so many of the stories we grew up on.

Lopez takes a more old-fashioned approach with the stylized, allegorical “Stories About Snakes,’’ while Gardley ratchets up the Grand Guignol aspects of “Hansel and Gretel’’ in “Half Handsome and Regrettable,’’ sometimes trying too hard for laughs in the process.

ADEkoje’s “Cry Baby Jones,’’ inspired by “The Frog King,’’ is a fanciful and entertaining flight of imagination whose title character, played by Mascoll, is a 35-year-old “baby’’ in a diaper who sells suspicious “baby powder’’ to the residents of Plastic City while wooing Princess (Sidberry).

In “Thanksgiving,’’ Greenidge updates one of the lesser-known Grimm tales, “Clever Else,’’ into an emotionally absorbing slice of working-class life and disappointed dreams.

It opens innocently enough, as three women in their 30s, friends since childhood, sit and chat while their young daughters take dance lessons. But as Nicole (Kimmerling) reminisces with Lisa (Prefontaine) and Colleen (Lewis) about her first date with a boy of whom Lisa was also enamored, old resentments start to bubble up, and soon boil over.

Nicole was the pretty one in high school, and, swept off her feet, she abandoned her dream of going to college and married the boy. Now (to Lisa’s vindictive satisfaction), he is out of work, Nicole’s large family is on the edge of desperation, and her youth is fading as fast as her optimism. “I look at the TV screen, and I see bits of what I could be,’’ says Nicole.

In other words, she is neck-deep in one of the most wrenching of those “basic human predicaments,’’ and, for the time being at least, she no longer believes in fairy tales.