Working as a team for 'Lombardi' 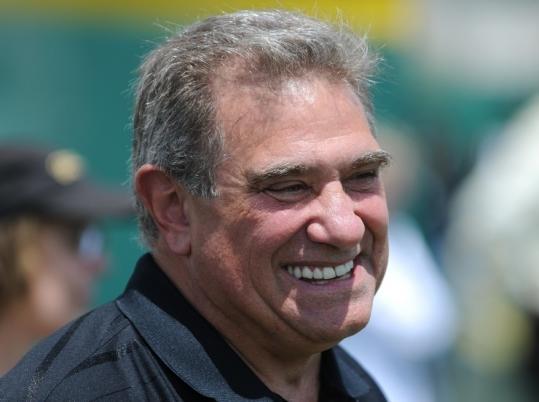 Dan Lauria is in character when he calls. I can tell before even picking up the ringing phone, because our interview is scheduled for 2 p.m. and it’s now just after 1:45. Sure enough, as soon as I say hello, the first words out of the veteran actor’s mouth are, “I’m on Lombardi time!’’

Lauria doesn’t speak those words, he barks them, because he’s preparing for the role of Vince Lombardi, the legendary pro football coach who is the subject of a new play headed for Broadway. “Lombardi’’ will be in previews Thursday through July 28 at the Mahaiwe Performing Arts Center in Great Barrington before a New York run that starts Sept. 23. Directed by Thomas Kail (the Tony Award-winning “In the Heights’’), the play was written by Oscar winner Eric Simonson, based on David Maraniss’s 1999 biography of Lombardi, “When Pride Still Mattered.’’

Among larger-than-life characters from the 1960s sports world, Lombardi is a rarity in that his star has not been dimmed by time. His maxims and one-liners are still displayed in locker rooms and even board rooms. Although well known for his leadership quirks — if you showed up at the appointed time for a team meeting, for example, you were 10 minutes late — Lombardi is remembered above all else as a winner, for leading the to five National Football League championships in his nine years of coaching on the frozen tundra of Wisconsin. To this day, after the final whistle of a Super Bowl, do you know what the winning coach is handed? The Lombardi Trophy. That’s a legend for you.

“In my town on Long Island, we all knew of Lombardi even before he went to Green Bay, because he was one of the few Italians coaching in the league,’’ says Lauria, who spent five years starring in the late ’80s as Jack Arnold, the crusty dad on the TV show “The Wonder Years.’’ Lauria grew up in an Italian-Irish neighborhood in Lindenhurst, N.Y., where he played high school football before suiting up at linebacker for Southern Connecticut State University. After a stint in the Marines, he spent a year as assistant coach at his old high school. “Once Lombardi took over the Packers,’’ Lauria continues, “he was such a character that pretty soon everyone knew who he was.’’

Simonson knows this all too well, having grown up in Wisconsin with an uncle who was on the Packers’ board of directors. Although too young to remember watching Lombardi coach, the playwright says, “He was in the ether. The admiration for him never faded. I always wondered why.’’

A few years ago, Simonson wrote a play about Frank Lloyd Wright, and he came to think of the two men as analogous. “You look at each of them and ask, ‘Why is this guy in the history books? Why is he so admired?’ ’’ says Simonson by phone from a rehearsal in New York. “There are other football coaches who have their place in sports history, but they haven’t joined the canon of historical figures that Lombardi belongs to.’’

The play presents Lombardi the coach, of course, but also the husband, the father, the mentor, the thunderous laugher but bad joke teller, the human. “The most imperfect perfect man I ever met,’’ says Michael McCormick, the fictional magazine reporter (played by Keith Nobbs) who spends a week living in the Lombardi home while researching a profile and serves as the play’s narrator.

Also onstage with the coach are his wife, Marie (Judith Light of TV’s “Who’s the Boss?’’) and three Packers players. Although Bill Dawes (portraying star halfback Paul Hornung) played high school football, Robert Christopher Riley (as linebacker Dave Robinson) played in college, and Chris Sullivan (fullback Jim Taylor) played junior tennis on the USTA circuit, it’s reassuring that the only football action audiences will see is in historical game footage, used thanks to a partnership with the NFL. Actors trying to look like athletes while in character can be painful to watch. Remember Leonardo DiCaprio’s excruciating attempt to hoop it up in “The Basketball Diaries’’? And that was a movie, where he had unlimited takes to show he could hit a jumper.

Sports have commanded the Broadway stage before, from “That Championship Season’’ and “Damn Yankees’’ to “Take Me Out.’’ But rarely has there been a show about a real-life figure. That would seem to present a challenge, since audiences are likely to include sports fans who don’t typically attend the theater as well as theatergoers who aren’t so versed in sports legend.

“But there’s one thing that sports fans and the theatergoing public have in common: They want to be entertained,’’ says Simonson. “The best sports contests are those that have ups and downs and tell a compelling story, and the same thing goes for plays. So while I was writing ‘Lombardi’ — as with works I’ve done in the past — my process was simply to create a play that I would want to buy a ticket for.’’

Lauria, for his part, had long wondered if buying a ticket was the only way he would get to Broadway. Now 63, he’d done lots of TV and film work and had been on off-Broadway stages, but he’d never played the big houses. When “Lombardi’’ came up, even though he is a football guy and even looks like the man, Lauria thought there was no way he’d get the role. “You know how theater owners are: They want Julia Roberts to play Lombardi,’’ he says. “Anybody who would sell 12 weeks worth of tickets.’’

When Lauria did land the part, he invited his acting mentors, Jack Klugman and Charles Durning, out to dinner. “I’m buying tonight, guys, because we’re celebrating,’’ he told them. “I finally got a new play to Broadway. Not off-Broadway. Broadway.’’

As he started to tell them his ideas for portraying Lombardi, Klugman turned to Durning and growled, “Look, Charlie, the kid’s getting excited.’’ Lauria is not exactly a kid, unless you’re the 88-year-old Klugman or 87-year-old Durning, who leaned toward Lauria and said, “Dan, it’s just another play. Just do the work.’’

It felt like a Lombardi-like lesson. “I realized that’s what Lombardi the man was about, and what ‘Lombardi’ the play now is about for me: You just have to do the work,’’ says Lauria. “Let everyone else get into the hype.’’

Such self-awareness combined with an utter lack of regard for celebrity is one of the things that made Lombardi an enduring cultural figure.

Says Simonson, “The story is that Vince Lombardi was talking to a reporter one time and he said, ‘Some guy told me I have charisma. What is it?’ And the guy said, ‘Don’t worry, Vince, it’s not contagious.’ Lombardi had tons of charisma, a force of character that was undeniable. And I think that’s terrific for an adaptation to the stage.’’

Jeff Wagenheim can be reached at wagenheim@swersey.com.