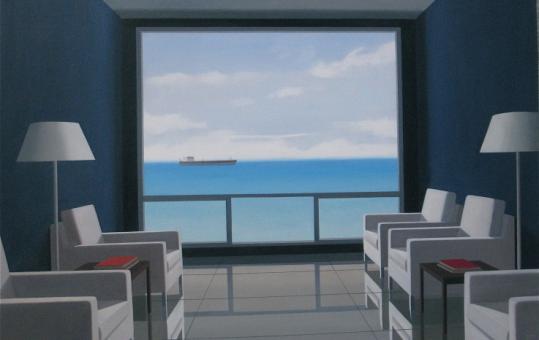 Women surround themselves with painted and manufactured flowers in Neeta Madahar’s “Flora’’ photographs at Howard Yezerski Gallery. Using the blossoms, along with costumes and sets, Madahar and her subjects create exaggerated, sometimes comical personae. The trappings of Madahar’s scenes make a parallel to the popular construction of feminine identity.

“Flora’’ belongs in a tradition that reaches back to 19th-century photographer Julia Margaret Cameron and includes the pioneer color portrait photographer of the 1930s Yevonde Middleton, known as Madame Yevonde. Cameron and Middleton often dressed their subjects up in allegorical costumes, using photography to conjure illusion. Madahar uses her camera to puncture it, while still paying tribute to its power.

She has worked on the edge between reality and theatricality, or between nature and artifice, before. Her “Sustenance’’ photographs of birds shot outside her window were dramatically lighted. Her euphoric video “Falling’’ had us witnessing sycamore leaves swirling through the sky — a staged action.

If the artifice is ramped up in “Flora,’’ it fits the subject. “Lisa With Primroses’’ depicts a woman in a 1950s-era yellow gingham dress. She sits on a low, primrose-scattered hill gazing sweetly at animals gathered at her feet. The hill is evidently made of AstroTurf; the animals are porcelain tchotchkes. The backdrop of trees and grass is roughly painted. “Lee With Fuchsias’’ shows a sleek, dark-haired woman in her 40s surrounded by the hot pink flowers. Her lipstick, dress, and nail polish match the tone. She challenges us with her gaze as she slices her finger open with a glimmering dagger.

Most of the models are not true blossoms, either; they’re all between 30 and 50 years old. They’re playing roles, staging femininity, just as many, many women do every morning when putting on makeup. Not that the femininity isn’t real. But we all know how a little artifice can perk a girl up.

Emptiness and immediacy
It’s tempting to call Tom McKinley a realist, because his paintings of California modern architecture are so crisp and bright. McKinley has a show at Beth Urdang Gallery, where his paintings have been paired with prints by Alex Katz.

But McKinley is not a realist. For one, his paintings depict fictional places, but also they’re just too clean and orderly to be real. They’re all about composition and tone, like the turquoise glow of a swimming pool in “Palermo Terrace.’’ It’s off to one side, balanced by the warm interior of a home, where we see through a glass wall modernist lamps and sofa, and a Brice Marden-style painting. Then there’s the forever blue of the sea in “14th Floor,’’ which puts us in a waiting room with square chairs, blue walls, a reflective floor, and a floor-to-ceiling window.

These paintings pivot on flat planes and right angles, like the architecture they depict. They’re airy and welcoming, but McKinley makes his environments a little too pristine and free of human presence. That adds an element of spookiness to all the pictorial clarity.

Katz’s portraits, with their planar quality and simple lines, are a great complement. In “The Swimmer’’ (1974), a black-and-white aquatint and drypoint, a young man breaks the surface of the water from below, drops splashing at his chin, patches of sun shining in his black hair and on his wet cheek. Katz shares an austerity of line with McKinley, but his portraits have a terrific immediacy that feels like an antidote to the emptiness of McKinley’s sunny homes.

‘New Talent’ show
This year’s “New Talent’’ show at Alpha Gallery features three provocative painters and a narrative photographer. Christian Flynn, a painter still in the graduate program at Yale, uses his computer as a sketchpad, and then paints the images he creates. The results are all hard-edged interiors, such as “Lounge,’’ filled with lurid, contrasting tones — here, the chartreuse floor blinks against the kelly green ping-pong table, and the people are all neon-toned silhouettes.

Flynn’s works pop, and make a wonderful contrast to Shane Neufeld’s paintings, also architectural (Neufeld is a practicing architect), but much more expressionistic and abstract. Neufeld plays with volume and space in his untitled, entropic works; big beams and blocks tumble into one another, then dissolve into brushy strokes — he’s at the edge between form and chaos.

Soojin Kim’s paintings of cookies and candy read more like portraits. She made them after her father’s death, in tribute to him and his sweet tooth. They’re arrayed on the wall in grids, like boxes of sweets. Then there’s one large image of stacked peanut butter cups, melty, with the peanut butter glimpsed through the chocolate. Curiously, for all its mouth-watering qualities, these works are somber, exquisitely painted with dark, moody backgrounds and elaborate frames.

Cate McQuaid can be reached at cmcq@speakeasy.net