A glimpse from dawn of photography 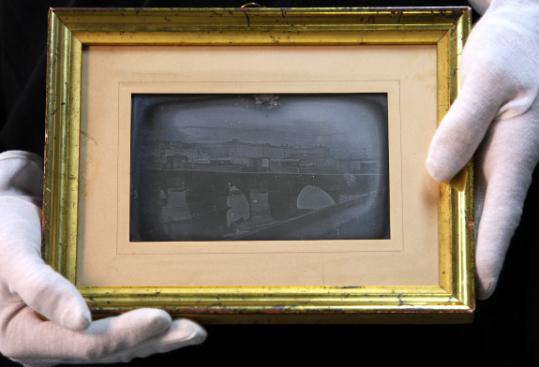 SALEM — In a dark corner of a back room at the Peabody Essex Museum, the curator stumbled upon a faded shoebox. Inside was a small treasure wrapped in paper: a gold-framed daguerreotype showing a Parisian street scene. On the back, somebody had written the date of its origin: 1839, the dawn of photography.

Phillip Prodger, the first full-time photography curator at the Peabody Essex, knew right away he was onto something special. Now, with the help of a Harvard conservator, he’s working to find out whether the daguerreotype, an early form of photograph, could have been taken by inventor Louis Daguerre himself. If so, the 4-by-6 1/2-inch image could be worth upwards of $3 million and could provide a valuable window into the earliest days of photography.

“Any photograph as early as that is a pretty momentous discovery,’’ said David Haberstich, associate curator of photography at the Smithsonian’s National Museum of American History. “There aren’t many surviving, so a new image that old would be terrific.’’

In fact, no more than 20 daguerreotypes are known to exist from that year. The Metropolitan Museum of Art has nothing dating to 1839. Boston’s Museum of Fine Arts has a daguerreotype from 1840.

“It’s quite early, and it’s an outdoor scene in Paris, reportedly in good condition, by someone who is quite well known,’’ said Laura Paterson, a specialist in the photographs department at Christie’s auction house. “All of these things add enormous value. It sounds as if they have a rare find on their hands. It’s of immense historical importance.’’

And the Peabody Essex Museum has no plans to sell it.

“The primary concern is to make sure the work is safe and not deteriorating,’’ Prodger said last week after carefully unwrapping the picture in the museum’s climate-controlled conservation department. “I would love to get it out for the public to see. Today, there is nothing more common than the photograph. To turn back the clock to a time when there were only a dozen is incredible.’’

So how did such a valuable art object end up in a shoebox? To begin with, the museum dates to 1799, meaning an immense amount of jumbled materials came into its possession well before modern collection policies and records were in place. A man named John Burley bought the daguerreotype in 1842 in Paris and later gave it to the museum. On the day in 1858 that it entered the collection, records show that the Essex Institute, as it was then known, also acquired an antelope skull from the Cape of Good Hope, a boa constrictor from Java, and a malformed seagull egg.

Two years ago the museum hired Prodger, and he began examining some of the upwards of 850,000 photographs in the collection, ranging from works tucked neatly in storage drawers to pictures packed away and forgotten in closets.

In 1988, Peabody Essex staff cleaned the daguerreotype with ammonia to remove grime, according to museum records. After that, it appears the frame was wrapped in soft paper and placed into a faded, bluish Fava shoebox, along with several other, slightly newer photographs.

Prodger, 42, found the daguerreotype about two years ago. “I immediately felt elated, but I also felt a little sick to my stomach,’’ he said. “I knew I had my work cut out for me.’’

For a time, the museum considered working with the Getty Conservation Institute in Los Angeles to examine and protect the piece. But Getty conservators felt the image was too fragile to travel. Then the Peabody Essex learned of Elena Bulat, a photograph conservator at the Harvard University Library’s Weissman Preservation Center. This year, the museum hired Bulat to do a scientific study of the image, and starting this summer, she will remove the work from the frame, have it photographed for documentation, and clean the surface with an air blower. Meanwhile, Prodger and a graduate student will consult with art historians, newspaper and magazine archives, and other records.

“At this point, it’s really a detective story,’’ said Prodger.

The curator showed off the daguerreotype in the museum’s conservation department on a recent afternoon. A silver-coated copper plate sealed under glass, it shows Paris’s famous Pont Neuf bridge crossing the Seine River, with no visible people or horse carriages. The exposure time was so long — up to 30 seconds — that the camera could not capture a moving object without creating a blur.

The picture itself is not signed. On the back of the frame, a label names the shop of Vincent Chevalier, the Paris optician who made Daguerre’s camera lenses. It’s unclear who took the photograph. The label merely states where Burley purchased it, said Prodger.

Alex Novack, a Pennsylvania-based photography dealer who has sold works to a range of museums, including the Met and MFA, said he’s eager to learn who took the image.

“If it’s by Daguerre rather than Chevalier, the piece is probably worth upwards of $3 million,’’ he said. “If it’s by Chevalier, it’s still probably mid-to-high six figures.’’

Because of the rarity of a daguerreotype from 1839, there’s no real record of sales for an item similar to what Prodger found. Christie’s set the record for a daguerreotype auction with an 1842 image of the Temple de Jupiter Olympien in Athens, which sold for $916,126 in 2003.

Brown University professor Douglas Nickel, former photography curator at the San Francisco Museum of Modern Art, said he wouldn’t be surprised if the researchers found documentation for the daguerreotype in an old news article published in the French press.

After years of working to create a dependable camera, Daguerre launched a full-scale publicity campaign in 1839, starting with a press release and, in August of that year, a famous presentation of his invention to a joint meeting of the French Academies of Sciences and Fine Arts. As part of this push, Daguerre took a group of pictures outside for demonstration purposes. This image could be one of them.

“There were lots of people who saw these things and described them,’’ said Nickel. “ If this one shows up in an article of 1839, given the dates or the labels, there’s a pretty good bet they can figure out who did it.’’

Photography experts from around the world will be watching. Francoise Reynaud, photography curator at Paris’s Musee Carnavalet, which is dedicated to the city’s history, said she’s excited by the potential find, but it’s too early to make a definitive statement.

“Views of Paris from 1839 are so rare,’’ she said. “But being a curator, you are always careful before saying things that are going to be published. There are so many questions.’’